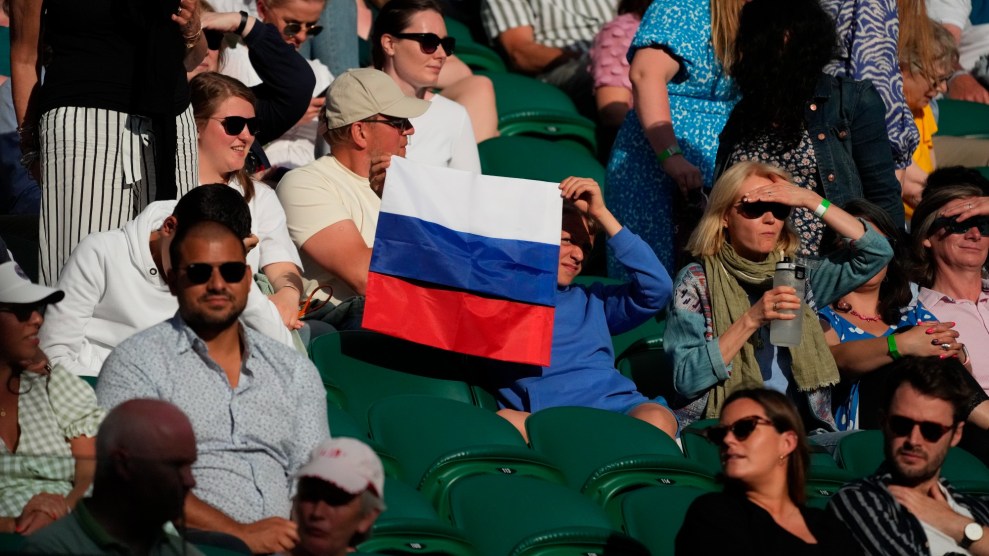 A spectator holds a Russian flag during a tennis match between Russia's Daniil Medvedev and Croatia's Marin Cilic during the 2021 Wimbledon.Alberto Pezzali/AP

Wimbledon, England’s historic tennis competition, announced Wednesday it would ban players from Russia and Belarus. The ban had been foreshadowed last month when British sports minister Nigel Huddleston suggested that Russians be barred from the tournament unless they provide “some potential assurance that they are not supporters of Putin.”

The announcement followed several other sporting bans put in place since Russia invaded Ukraine in February: FIFA, soccer’s global governing body, suspended Russia from all international competitions, while the Boston Marathon barred runners from Russia and Belarus, which Russian leader Vladimir Putin has used as a staging ground for his attack on Ukraine.

Now, I can understand the impulse to show solidarity with Ukraine and, certainly, to target punishment at Putin and his cronies—people like Chelsea owner Roman Abramovich. But there is something almost dystopian about assigning collective guilt to all Russians. Only hours after the invasion started, antiwar protests broke out across Russia, including in Putin’s hometown of Saint Petersburg. In just one day of protests, roughly 5,000 Russians were arrested.

Among those challenging Putin’s war: the same athletes Wimbledon plans to ban. Take Russian tennis star Andrey Rublev, who wrote “No War Please” on a television camera after a competition. His countryman Daniil Medvedev, formerly the No. 1 ranked player in the world, called for “peace all over the world” after the invasion. Do those statements meet Wimbledon’s standard? What does?

Even if Rublev and Medvedev had kept silent, is it really fair for Wimbledon to assign them blame? Any person with loved ones in an authoritarian country understands the risks of speaking out. It takes bravery to resist an autocratic thug like Putin, but most people aren’t in a position to compromise their family’s safety. When I reported on protests against the Chinese government during the Winter Olympics in Beijing, I was surprised to hear some debate among activists over the wisdom of speaking out. Not all protesters expected athletes to risk their personal safety to challenge China’s increasingly repressive state.

The best way to deny legitimacy to authoritarian rulers is not to demand loyalty tests from their residents, but to demand that corporations stop whitewashing the regime’s excesses. When Olympic sponsors trip over themselves to not condemn China’s human rights abuses or FIFA grants a World Cup bid to a petrostate using slave labor, it does far more harm than a single Russian athlete staying quiet about Putin.

The sporting world is awash with corruption and skullduggery. The way to change that isn’t through blanket bans, but in denying the financial benefits and prestige that come from giving authoritarian governments a spot at the table in the first place.