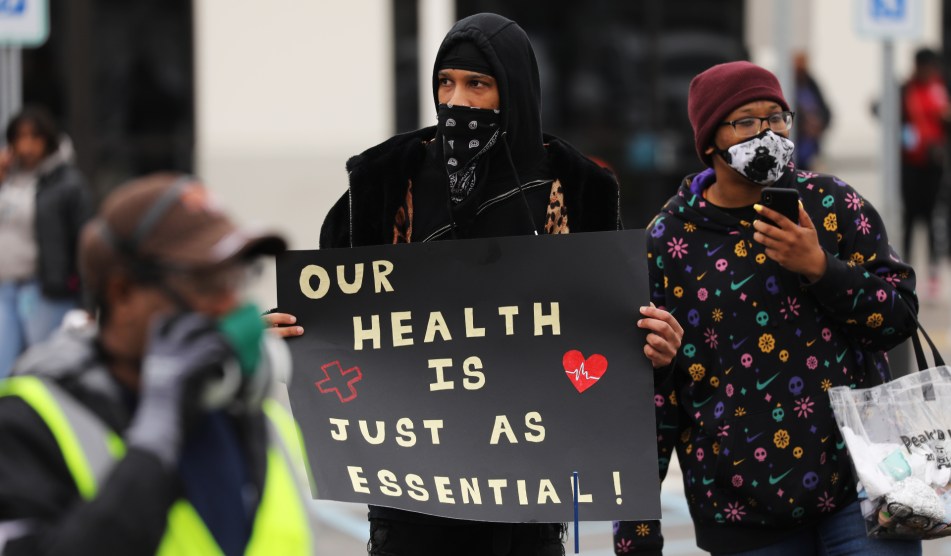 Workers at the Staten Island facility march during a March 2020 protest.Spencer Platt/Getty

The JFK8 warehouse in Staten Island is set to become Amazon’s only unionized worksite in the United States. On Friday, the National Labor Relations Board announced that the Amazon Labor Union had gotten 2,654 votes versus 2,131 for the company. It is a momentous victory that could reshape assumptions about the ability to overcome Amazon’s aggressive, and sometimes illegal, anti-union tactics. The Amazon Labor Union now has the chance to rack up a second victory when workers at another Staten Island facility vote to unionize later this month.

Christian Smalls, the president of the Amazon Labor Union, celebrated the win on Twitter:

@amazon wanted to make me the face of the whole unionizing efforts against them…. welp there you go! @JeffBezos @DavidZapolsky CONGRATULATIONS 🎉 @amazonlabor We worked had fun and made History ‼️✊🏾 #ALU # ALUfortheWin welcome the 1st union in America for Amazon 🔥🔥🔥🔥

This was a stunning win. Not only because it’s the unionization of an Amazon warehouse, but because of who made it happen. In the early days of the pandemic, Amazon fired Smalls after he’d helped organize a walkout over Covid-safety concerns at the company’s Staten Island warehouse. A few days later, Vice News obtained notes from a meeting of Amazon executives. “He’s not smart, or articulate,” Amazon general counsel David Zapolsky said about Smalls, who is Black, “and to the extent the press wants to focus on us versus him, we will be in a much stronger PR position.”

It was a galvanizing moment for Smalls. If Amazon wanted him to be the face of the opposition, he would be its face. A year later, Smalls was outside his old warehouse collecting signatures to authorize union elections. Few expected him and the fellow organizers of the newly formed Amazon Labor Union to win. They were going it alone by operating independently of established unions and were budgeting week-to-week. The union’s GoFundMe page had collected only $4,500 over the first six weeks of the campaign.

It was the opposite of the Amazon election in Bessemer, Alabama that had attracted so much media attention and celebrities early last year. In place of Killer Mike and a message of support from President Joe Biden, the Amazon Labor Union had Susan Sarandon stopping by a phone bank. After the hype and then disappointment following Bessemer, articles contained an almost obligatory mention that the odds of the Amazon Labor Union winning at a warehouse with more than 8,000 eligible workers were long. Smalls, who is 33 years old, insisted that their scrappiness was a strength. He was right.

In Bessemer, the National Labor Relations Board ended up throwing out the initial election results due to company misconduct. The rerun of the election is proving to be much closer. Amazon was up 993 to 875 after counting ended on Thursday. But there are still 416 challenged ballots that have not been counted, meaning there is a chance that the Retail, Wholesale and Department Store Union could end up winning.

The biggest challenge ahead of the Amazon Labor Union will now be securing a strong collective bargaining agreement. The union has said it will push for a starting wage of $30, up from an average wage of about $18 today. It also wants two paid 30-minute breaks and a paid hourlong lunch break. Amazon will almost certainly fight those demands, both to save money at the warehouse and to deter other workers who are considering unionizing. The company has every incentive to try to force a bad contract on workers, or leave them with no contract at all.

Amazon said in a statement that it was “disappointed” by the result and that it was “evaluating filing objections” based on what it called “inappropriate and undue influence” from the National Labor Relations Board. The company appeared to be referencing the NLRB’s decision in March to sue Amazon in federal court to correct “flagrant unfair labor practice.” The board is trying to get Gerald Bryson, who was fired after leading two Covid-safety protests, reinstated. Had Amazon not allegedly violated federal labor law, the NLRB would not have intervened.

Like in Alabama, Amazon spared no expense in trying to defeat the Amazon Labor Union. It forced workers to attend mandatory anti-union propaganda sessions, blanketed the warehouse with signs urging employees to vote no, and set up a website to discredit the Amazon Labor Union and unions more generally. Last year alone, the company spent $4.3 million opposing unionization efforts nationwide, HuffPost reported. It paid some of its professional union busters $3,200 per day.

Smalls had started working for Amazon in 2015 and joined the Staten Island warehouse in 2018. He’d put in 12-hour overnight shifts and knew the people he was organizing. Along with the other leaders of the Amazon Labor Union, Smalls responded to Amazon’s union busting by running a high-energy campaign that relied on in-person conversations and platforms like TikTok. In late February, Amazon had Smalls arrested for trespassing after he went to deliver food to workers.

Smalls also bet that New York’s long history as a union town would help put them over the edge. “The bus drivers, the sanitation workers, the police, the firefighters, they’re all unionized,” he told the Guardian last year. “Everybody is related or knows somebody in a union.” That union density is particularly strong on Staten Island, where roughly a third of workers belong to unions. Nationwide, the rate is just over 10 percent.

Friday’s victory upends basic assumptions about what is usually needed to win a union election. Federal labor law requires unions to gather signatures from 30 percent of workers to force an election. A majority of voters then need to vote in favor of unionization for a union to be formed. But unions traditionally try to get around 70 percent of workers to sign authorization cards since not everyone will necessarily end up voting yes.

The Amazon Labor Union, on the other hand, had to withdraw its initial election petition in November after failing to meet the 30 percent threshold. It resubmitted the petition in December after getting more signatures, but was still far short of 70 percent. It was seen by some as a sign that the union lacked broad-based support among JFK8’s workforce.

Smalls never seemed too bothered by the doubters. “I know I’m a misfit, there’s no shame in my game,” Smalls told Bloomberg last month. “I say what I say and that’s what got me here. The same thing with the union: It represents what the workers want to say.”

This story has been updated with a statement from Amazon.