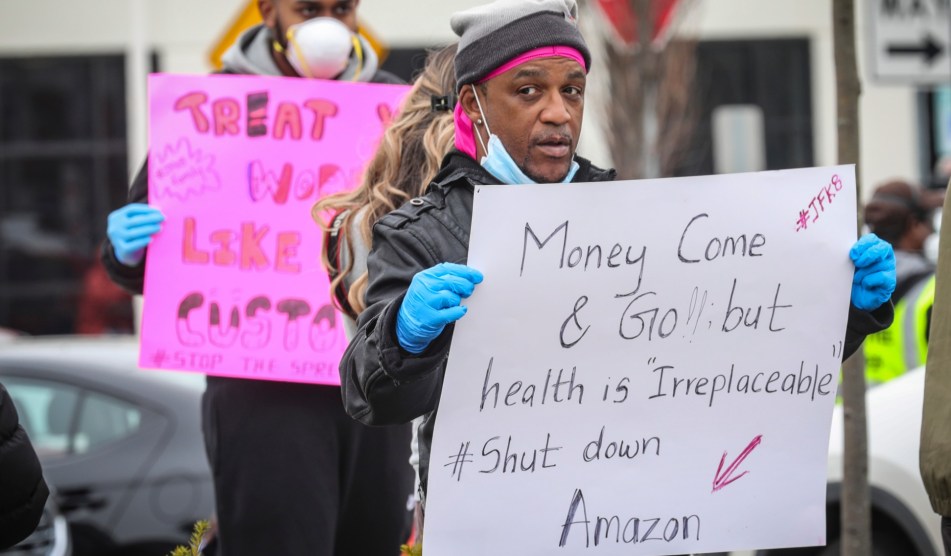 Dozens of workers at a New York City–based Amazon fulfillment center walked out on Monday to protest a lack of health protections and demand more cleaning at the Staten Island facility, where at least one worker has tested positive for COVID-19. They joined other front-line workers striking this week: Instacart shoppers also held a nationwide walkout on Monday, and a Whole Foods “sick-out” took place a day later. All want a vastly better support system in terms of health, pay, and safety on the job.

Soon after, an organizer and attendee of the protest, Christian Smalls, was fired. The company said he was dismissed for violating the guidelines of a 14-day paid quarantine after he had been in contact with the person who tested positive for COVID-19 at the facility. Smalls said that seeing people sick at work is why he organized the protest. (Amazon contends that only 15 workers actually left the facility.)

Live at @amazon JFK8 walkout to demand protections for workers and the public during COVID-19. Amazon is putting profits over safety#amazonstrike #ProtectAmazonWorkers pic.twitter.com/YRWGu5gx2R

Mother Jones spoke to a handful of Amazon workers—at the Staten Island facility, known as JFK8, and other Amazon fulfillment centers—about workplace conditions amid the coronavirus pandemic. They say that, as Amazon becomes an increasingly important resource for Americans stuck at home, conditions at the facilities that package and ship goods are putting employees at risk.

“Everybody’s just together,” says Terrell, an employee at JFK8 who requested to use only his first name for fear of retaliation. “You really can’t separate, because there are too many people there.”

Terrell worries about his own health, especially as he tries to keep up with Amazon’s high standards for getting packages out of the facility. Terrell is a “picker”—he chooses the right items off the shelf to be shipped. As such, he is assigned a rate at which he must pack items (run down an aisle, pick from a shelf, put in a bin): 400 items per hour, or nine seconds an item. Signs put up in the last few weeks encourage employees to wash their hands as often as possible, and pickers typically wear gloves throughout their shift but Terrell says the pressure to hit his rate means he rarely takes breaks to wash his hands or switch out his gloves if he’s touched his face. There isn’t a hand sanitizer bottle at every station.

“If you keep going back and forth [to the bathroom], you’re not going to have enough time to hit rate,” Terrell says. He worries about the disease spreading as he touches product after product—to himself,  to his family, to those delivering and receiving packages.

Last week, a worker at the sprawling facility tested positive for COVID-19. As the company performed a deep clean, work continued. Positive COVID-19 tests have cropped up at multiple facilities, and Amazon has cleaned and quickly reopened—the Queens warehouse, where an estimated 2,000 people work, for example, was open just a day after cleaning. Amazon’s Kentucky warehouse was shut down for a week starting last Thursday, but only because the governor requested it. Far from limiting production because of the crowded packing facilities, on March 16 Amazon announced it is hiring 100,000 new workers to staff them.

Terrell says he’d like to see fewer people in the warehouses, not more. “Especially right here, where cases in New York are rising by the hundreds,”

Terrell’s concerns align with what Amazon workers across the country say is common: work stations stacked “side by side, definitely less than 3 feet away”; packed break rooms; and the enforcement of Amazon’s usual stringent standards for speed despite the need for increased sanitation.

The safety of workers has, says Hibaq Mohamed—an activist and organizer in Minnesota who has been vocal over the last few years about harsh conditions, frequent injuries, and lackluster job security at Amazon—taken a backseat to profit.

Mohamed called me 10 days ago from the Shakopee, Minnesota, Amazon fulfillment center parking lot, frustrated by another day of work. She had just been “arm to arm, shoulder to shoulder” in the break room heating up lunch. “It was too crowded.” She said she just “left the food in the microwave.”

“If I build a box, I’m passing like within a second the next person, and then a second the next person; always touching,” says Mohamed. “And [Amazon] didn’t even give us extra time for this crisis to wash my hands more.” When Mohamed goes to AmCare, the medical clinic Amazon runs for its factories, for guidance on the coronavirus, she is told not to worry.

Amazon, which did not respond to requests for comment on this story, has instituted a series of measures to help workers, including increases in hourly pay (by up to $2 an hour) and mandatory paid overtime at a higher rate. Other changes have been more dubious, like the hiring of 100,000 more workers on top of already filled factories. The company has asked, according to workers and other reporting, that staff stay just 3 feet apart from one another, not the widely cited metric of 6 feet.

Mohamed says that when she reports these concerns to her manager, “They’re saying, ‘If you are afraid, go home.’” But potential economic struggles await those who choose to stay home. Zachary Lerner, an organizer with New York Communities for Change, which has advocated for Amazon workers, noted there aren’t many options beyond paid time off. Unemployment benefits require getting laid off; the pay bump from Amazon means going in.

“If you’re sick and you still need to pay your bills you’re still going to go into work sick,” he told me, worried about the health risks. “You can use your paid time off [to not go] but a lot of people have already used for the year.”

That’s why strikers in New York wanted to cease operations at the center—at least until there is a more thorough clean of the facility. They are demanding other measures like the relaxation of hard standards for speed and more hand sanitizer on the job.

Amazon’s fulfillment centers are already often dangerous places to work. In March of 2019, Mother Jones reported more than 100 federal investigations into Amazon by OSHA in the preceding four years. One worker described it as an “American-made sweatshop.” The AmCare on-site medical facilities have long had spotty records with regulators for providing the necessary care. A Washington Post report noted problems with COVID-19 protection that extend across the world. In Italy, workers went on strike after two employees at a factory tested positive for the coronavirus.

As Amazon increasingly commands a monopoly over the privatized network to deliver goods, it’s a window into a widening gap: Those who are doing the crucial work of going out amid the coronavirus pandemic are the least protected. And advocates fear that the global emergency might let important regulations—on labor and safety—slide in the name of need, further entrenching the poor workplace conditions at Amazon.

“[For] the entire logistics and supply chain industry—they’re setting the standard,” Lerner said. “With retail shops closing all over the place, and now one of the only way you can order food goes through Amazon, it sets up Amazon to start taking over more and more of the market share. It sets up almost the Amazonification of like the entire e-commerce and logistics supply chain.”

“Amazon did not invent the infrastructure for delivery,” says Dania Rajendra, director of the Athena coalition, which tracks abuses by the company. “Amazon is not alone in privatizing [an industry that] in previous iterations was heavily regulated.”