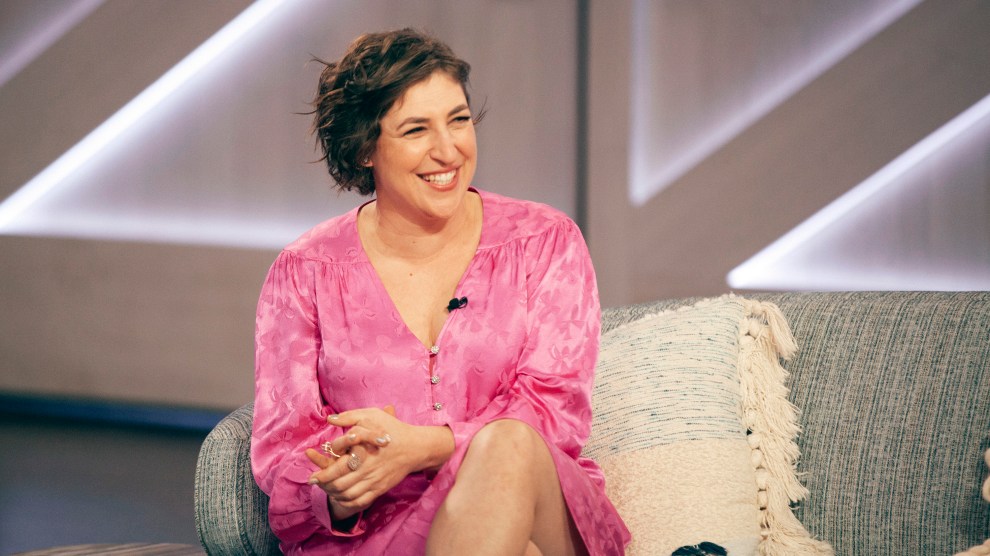 Yesterday, the producers of the long-running gameshow Jeopardy! announced two new co-hosts to replace the late Alex Trebek: the show’s executive producer, Mike Richards, and actress Mayim Bialik. Richards has his own issues—including being named in a pregnancy discrimination employment lawsuit—but I’ll let others open that can of worms.

Instead, I’ll focus on Bialik. On paper, she seems like a great choice for a show that celebrates the human intellect: Most famous for her starring roles in the TV sitcoms Blossom and The Big Bang Theory, she also has a PhD in neuroscience. Yet despite her scientific bona fides, Bialik has dabbled in realms that are distinctly anti-science. Let’s take a look at her track record.

First, there’s Bialik’s mixed messages on vaccines. Back in 2009, she told People magazine that her family was “non-vaccinating.” In 2012, in a post on the website Kveller, she endorsed anti-vaccine parenting books, including one by Dr. Bob Sears, the California pediatrician who had his medical license revoked for handing out dubious medical exemptions for immunizations. She’s since backtracked on that statement—in 2015, she said in a tweet that her kids were vaccinated. Last year, she released a YouTube video in which she said, cryptically, that she “delayed vaccinations for reasons you don’t necessarily get to know about.” She has publicly endorsed the COVID-19 vaccines, yet she told Yahoo Life in January, “I have a lot of questions about the vaccine industry, as do a lot of people. I have a lot of questions about the profits involved.”

Bialik is also a long-standing proponent of the pseudoscientific field of naturopathy. She has hawked a questionable supplement that claims to enhance brain function, including in an ad that’s on air right now, and in which she leverages her degrees. She’s been featured recently on a naturopathy podcast. In April, on her own podcast, Bialik ran an episode called “Alternative Medicine, Acupuncture & Adrenal Failure—Doulas Do It Right.” In the show, she interviewed midwife Elizabeth Bachner, whose naturopathic clinic in Los Angeles, Gracefull, peddles scientifically unfounded treatments, including IV therapy for anti-aging, oral chelation for heavy metals, and “homeopathic hormone-balancing injections.”

But wait, there’s more: Abundant research shows that birth control pills and devices are safe and effective. Still, Bialik has joined forces with actress Ricki Lake on her crusade against hormonal contraception. Last year, she was a speaker at Lake’s Body Literacy Summit, which warned women about the supposed dangers of the pill. Other presenters included midwife and herbalist Aviva Romm, who has written critically about vaccines. (After this piece was published, Romm told Mother Jones that she does not consider herself a vaccine skeptic and has advocated for COVID-19 vaccines, though she did write a book about alternatives to vaccines.) Bialik also hosted Lake on an episode of her podcast dedicated to criticizing birth control pills.

I could go on. Bialik has worked extensively with La Leche League, an organization that frequently promotes some scientifically dubious practices, including the discredited notion that birth interventions such as IV fluids and epidurals can prevent women from breastfeeding. She’s also written a book about attachment parenting, a child-rearing philosophy that, among other questionable teachings, warns parents that sleep training babies will permanently damage them. And all of this isn’t even to mention Bialik’s weird hypocrisy on feminism: She’s written an empowerment book for teen girls, yet in a 2017 New York Times op-ed, she implied that women invite sexual harassment by dressing immodestly.

It’s incredibly depressing that someone as accomplished as Bialik promotes medical and scientific misinformation. But it’s beyond disappointing that Jeopardy!—a show that is literally about facts—would choose her to be its public face. I’ll take “someone else, please” for $1,000.