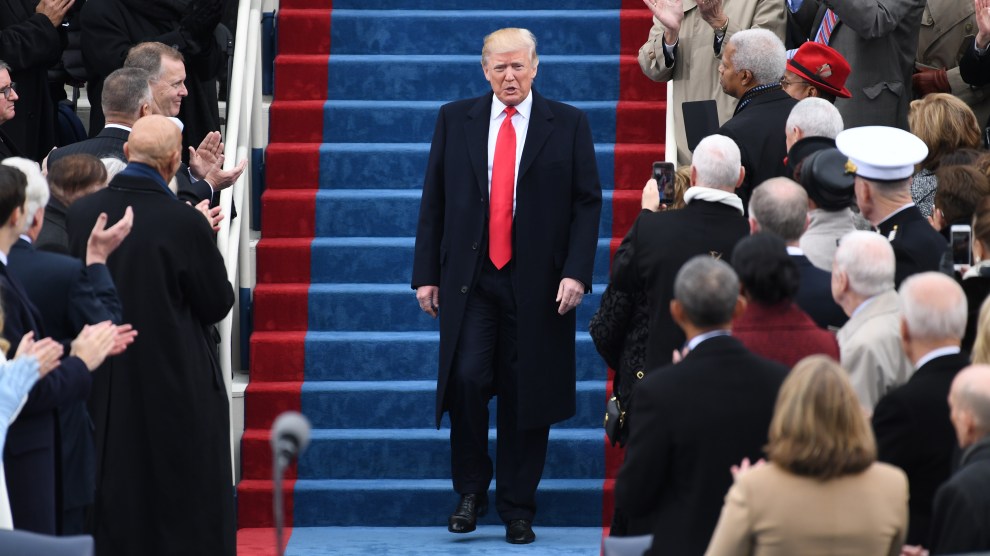 On the last full day of Donald Trump’s presidency, we thought it fitting to take a look back at some of the promises he made during his inauguration speech four years ago. They did not age well.

Take, for instance, Trump’s former deference to the United States’ tradition of peaceful transfers of power. Trump said in 2016:

Every four years, we gather on these steps to carry out the orderly and peaceful transfer of power, and we are grateful to President Obama and First Lady Michelle Obama for their gracious aid throughout this transition. They have been magnificent.

To call 45’s transfer of power to 46 “orderly and peaceful” would be an overstatement (and “magnificent” would be a sick joke). But at least Trump in 2016 mustered a thank you to Obama. In the nearly 20-minute farewell video he released today, Trump didn’t once utter the name “Biden,” instead referring vaguely to “a new administration.”

This was before Trump had established his habit of railing against the “Do Nothing Democrats” and the “Radical Left”—and long before he started baselessly accusing the Democrats of stealing the 2020 election.

We will build new roads, and highways, and bridges, and airports, and tunnels, and railways all across our wonderful nation.

All we got was a toppling border wall. And the phrase “Infrastructure Week“—a joke to signal the constant crisis at the White House. At first, Trump had high hopes for American technological innovation, too.

We stand at the birth of a new millennium, ready to unlock the mysteries of space, to free the Earth from the miseries of disease, and to harness the energies, industries and technologies of tomorrow.

“Free the Earth from the miseries of disease?” The COVID-19 death toll in the United States surpassed 400,000 today.

Trump, who has been less than gracious toward the nation’s armed forces, continued:

It is time to remember that old wisdom our soldiers will never forget: that whether we are Black or brown or white, we all bleed the same red blood of patriots, we all enjoy the same glorious freedoms, and we all salute the same great American Flag.

Many would argue that Black people and white people in the US do not, in fact, “enjoy the same glorious freedoms.” With a dogwhistle to the idea of a “forgotten America,” Trump concluded:

So to all Americans, in every city near and far, small and large, from mountain to mountain, and from ocean to ocean, hear these words: You will never be ignored again.

Unless, of course, you were a voter in Michigan, Pennsylvania, Georgia, Arizona, Nevada, or Wisconsin in 2020—Trump tried to toss those states’ votes out.