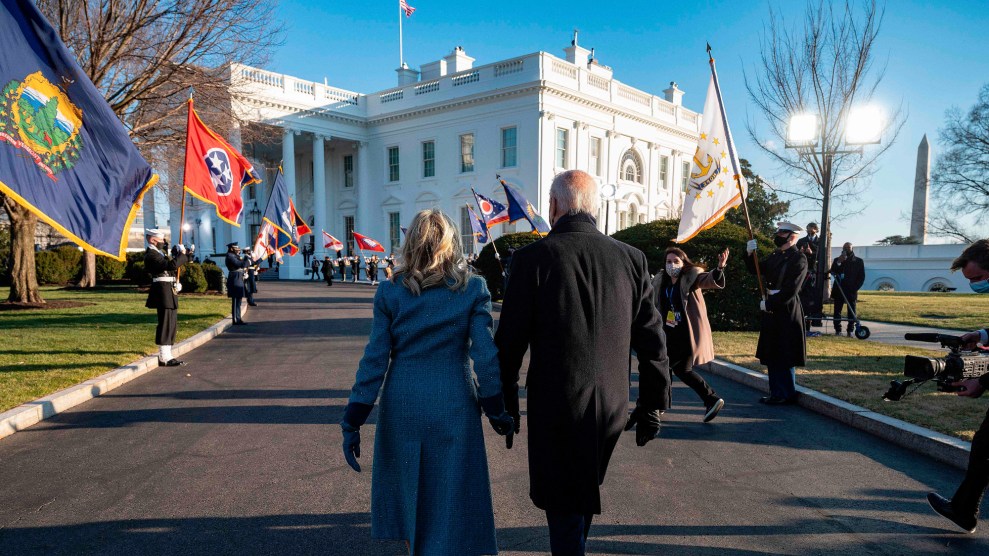 Today, two weeks after an armed mob stormed the US Capitol, Joe Biden was inaugurated as the 46th president of the United States. Kamala Harris was sworn in as vice president, making her the first woman, the first Black person, and the first Asian American to hold the office. In his inaugural address, the new president painted a picture of hope and collective effort, a dramatic contrast with former president Donald Trump’s dystopian “American carnage” speech from four years ago. “This is our historic moment of crisis and challenge,” Biden said in his address. “And unity is the path forward.”

Listen to DC Bureau Chief David Corn report live from outside the Capitol on this special inauguration episode of the Mother Jones Podcast:

David Corn and Senior Reporter Tim Murphy joined Jamilah King for live coverage and analysis of the event. David Corn was at the Capitol, where he witnessed a very different inauguration from ones he had attended in the past. Large crowds were kept away by the 25,000 federal troops that had taken over the city. There were ubiquitous face masks, heavy security, and members of Congress wearing body armor, even in the midst of the traditional pomp and circumstance. The US Marine Band played their trumpets and drums, the Capitol was bedecked in huge American flags, and former presidents and their wives—the Clintons, the Bushes, and the Obamas—all attended. President Biden said he spoke with former president Jimmy Carter, who was unable to travel to the event.

Notably missing was former president Donald Trump. The inauguration is usually a passing of the torch, but since Trump boycotted the inauguration with his final, venal, norm-busting gesture, the event had the quality of the nation turning the page and ushering in a new era. “We were literally standing where blood had been spilled, where violence had occurred just two weeks ago,” Corn tells Jamilah. “Yet democracy prevailed—she ‘persisted’ as Elizabeth Warren might say—and we were here carrying out this grand tradition, which has gone on for over 200 years.”

Jamilah asked Tim Murphy about the historical context, including Trump’s early escape from the city and refusal to participate.  “He’s a deeply petty person,” says Murphy, even though his actions (for a change) do have some historical precedent. “There’s nothing in the Constitution that says the president has to attend the inauguration, and historically that hasn’t always been the case. John Adams didn’t attend Thomas Jefferson’s inauguration. And that’s the election that brought us the peaceful transfer of power that Trump brought to an end by inciting a riot on the Capitol.”

In the end, David Corn says, the pervasive feeling during this momentous day was one of “mournful hope.”