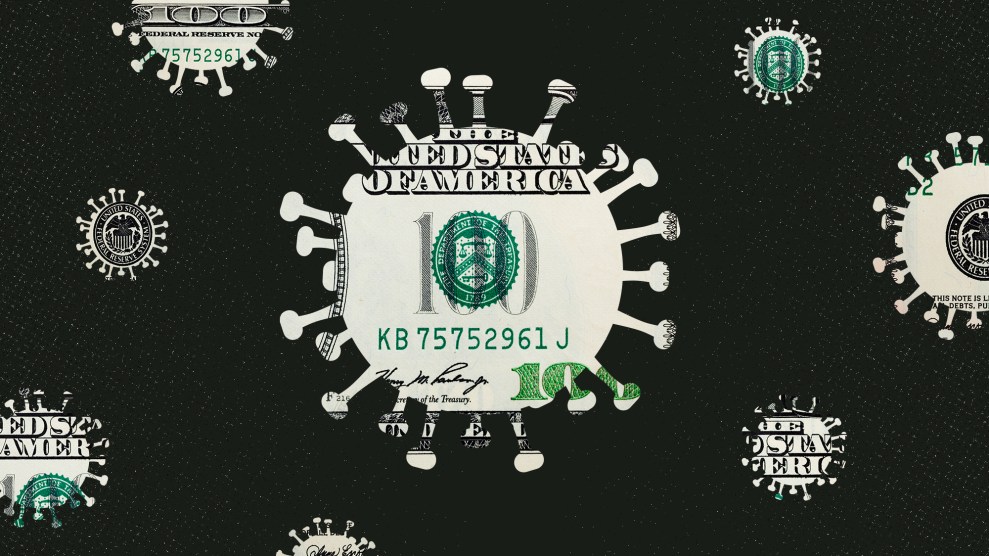 Update (August 24, 2021): Billionaire wealth has continued to skyrocket since this article first published. As of late-August, the combined net worth of US billionaires, according to IPS/AFT, had soared by more than $1.8 trillion relative to its value on March 18, 2020, when federal lawmakers first proposed an official response to the pandemic. That’s a staggering 62 percent increase over 17 months.

Not long ago, I wrote about how America’s ultrawealthy—folks with assets of $30 million and up—had enjoyed a full V-shaped recovery by the end of August, even as small businesses and poor and middle class families were still reeling from pandemic shutdowns and job losses. The moderately wealthy have also been doing just fine. But America’s billionaires are doing better than fine. Over the past 10 months, according to a new analysis of Forbes data by the Institute for Policy Studies and Americans for Tax Fairness, billionaires’ wealth in the United States has grown by almost 40 percent.

The booming stock market is part of the explanation, of course. In 2019, according to a proprietary analysis by Goldman Sachs, the wealthiest 1 percent owned a staggering 59 percent of all public and private corporate shares. So that stands to reason.

The starting point used in the analysis is March 18, 2020, a few days after stocks took a quick, deep hit before rebounding to record highs. From March 2020 to January 2021, the S&P 500, for example, returned more than 43 percent, if dividends were reinvested. (The researchers chose that start date because “by then most federal and state economic restrictions responding to the virus were in place,” and March 18 was also the publication date of Forbes’ annual billionaires report, the source of their baseline data.)

“A lot of these billionaire wealth surges are the result of companies that have benefited from the artificial conditions created by the pandemic,” notes IPS’s Chuck Collins, co-author of Billionaire Bonanza 2020, a separate report that examines pandemic profiteering. “Amazon, Walmart, Target—they have all benefited from having their competition shut down.”

But this doesn’t explain all of the gains. If the superrich had merely held onto their assets from last January until now, their stocks would have gained only 16.4 percent—a fine profit, but nothing like the gains the average billionaire has reaped.

Averages are misleading when guys like Elon Musk (whose net worth rose by 630 percent) and used-car mogul Ernest Garcia, II (the pandemic’s biggest “whale,” with gains of 657 percent) are in the mix. But among the 600 or so billionaires for which IPS/ATF have data, the median gain was about 25 percent. What’s going on here?

Well, cash is going on. A partial answer can be found in this chart from the 2020 World Ultra Wealth Report from Wealth-X (no link is available), which tracks and sells economic data pertaining to the super-rich.

Prior to COVID, liquid assets made up 38 percent of the holdings of the ultrawealthy. Indeed, several sources featured in my upcoming book told me that this has helped them weather the pandemic, and then some. “As it turns out, I had a lot of cash,” noted Jerry Fiddler, a former tech CEO who happens to be a member of Patriotic Millionaires, a group of wealthy citizens who lobby for more equitable government policies. “My financial advisors were saying there’s all this great stuff, and I’m saying, yeah, I like having a lot of cash right now.”

This “great stuff” might include investments in things like video conferencing tech (Zoom, Microsoft, etc.) and telemedicine, which have benefited greatly from school and office shutdowns. Big Pharma is obviously winning, too, Collins points out: “And then there is the rise of the mega ‘rent extractors’—Doordash, AirBnB, Instacart going public, Google, Apple—they aren’t doing the work but they and the apps and cloud-based technologies are extracting from every transaction.”
In addition, ultra-low interest rates, enabled by the Federal Reserve, have helped prop up markets and made borrowing cheap. Wealthy people, with solid access to capital under normal circumstances, can now borrow at very low rates, invest that cash selectively, and make a killing. Most of the biggest winners are not household names.

But some of the household names, including Twitter’s Jack Dorsey from above, fared quite well…

Roughly half of Americans, meanwhile, stand a few paychecks away from destitution. They don’t have cash to invest, let alone 38 percent of their total assets—which, for most people, wouldn’t be very much anyway. To this stark contrast, we can add the $161 billion in tax breaks for corporations and wealthy business owners that Republican lobbyists slipped into the CARES Act in March, and the $120 billion “double dip” (bipartisan!) tax provision in the latest COVID relief bill, both of which will overwhelmingly benefit America’s wealthiest.

The billionaires’ pandemic profits, the analysts calculate, would be enough to pay for all of the aid to working families in President Biden’s proposed relief package.

Now, a few of the names on this list have been doling out large sums for COVID relief, like Bill and Melinda Gates, Michael Bloomberg, and most notably, MacKenzie Scott. Early in the pandemic, Dorsey pledged $1 billion—then about one-quarter of his net worth—to help everyday Americans. In fact, the superwealthy have really opened up their wallets this year—as they should—for pandemic relief and racial equity.

The punchline: On the whole, even the most generous of these billionaires has made far more money this past year than they have given away. Even Scott, who surpassed all others by a long shot, giving away $4.2 billion, on top of almost $1.7 billion in social justice giving, ended up immensely wealthier than before. The rich get richer. Always.