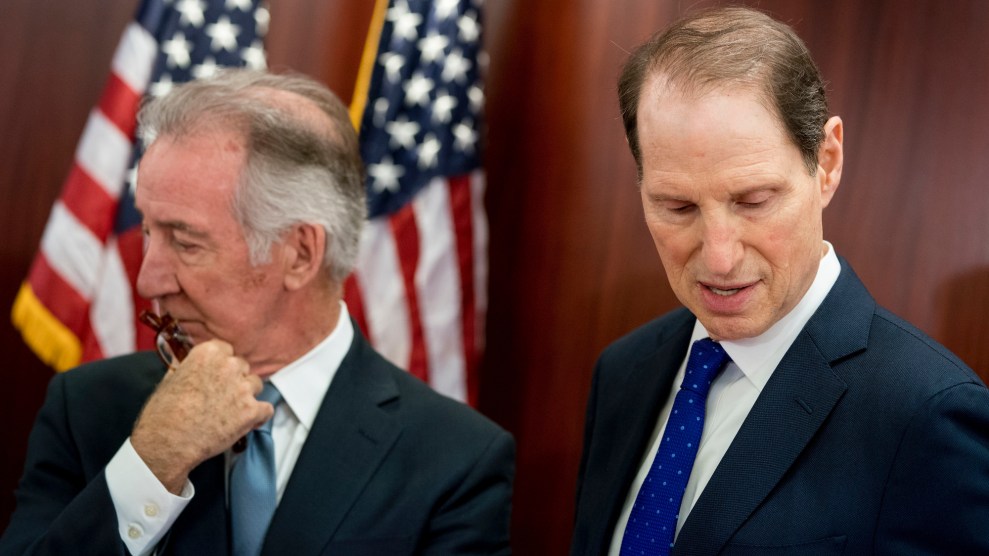 Sen. Ron Wyden, right, and Rep. Richard Neal, both Democrats, are pushing for a double-dip provision in the next coronavirus relief bill.

Federal lawmakers on both sides of the aisle are pushing to include in the new coronavirus relief bill a $100 billion-plus giveaway skewed toward the Americans who need it least. It’s a tax provision, and while it doesn’t appear in the GOP version of the bill announced this week, congressional aides say it’s far from dead.

Congressional Democrats expressed outrage back in April when it turned out that the $2 trillion CARES Act had included a couple of sneaky Republican provisions that added up to $161 billion in tax breaks for big corporations and the wealthy owners of “pass through” businesses—a category that includes hedge funds, venture capital firms, private equity partnerships, real-estate interests (including the Trump Organization), and professional entities such as lobbying firms, law firms, accounting firms, consulting firms, and medical practices.

“It’s a scandal for Republicans to loot American taxpayers in the midst of an economic and human tragedy,” Sen. Sheldon Whitehouse of Rhode Island and Rep. Lloyd Doggett of Texas said in a joint statement, referring to the larger of the two breaks. “Congress should repeal this rotten, un-American giveaway and use the revenue to help workers battling through this crisis.”

But the $3 trillion HEROES Act, which died in the Senate, included a provision that would have had a similar effect by allowing beneficiaries of federal Paycheck Protection Program (PPP) loans to “double dip.” That is, even if these “small business” loans were forgiven by the government, thus making the money a tax-free grant, the recipient would still be able to deduct all of their business expenses from their taxable income—including the amount the government paid for.

The result, calculates Steven Rosenthal, a tax attorney and senior fellow at the nonprofit Tax Policy Center, would be a stealth break of $100 billion to $150 billion that skews heavily in favor of the nation’s wealthiest business owners. Martin Sullivan, an expert in federal tax policy and former staff economist for both the Treasury Department and Congress’ bipartisan Joint Committee on Taxation, estimated the cost at roughly $100 billion.

Treasury Secretary Steve Mnuchin recently noted that allowing the deduction would be a departure from longstanding IRS policy, and the IRS agrees. But ranking Senate Finance Committee members Chuck Grassley (R-Iowa) and Ron Wyden (D-Oregon) and House Ways and Means chairman Richard Neal (D-Massachusetts) argued in a May 5 letter to Mnuchin—without evidence, Rosenthal claims—that Congress had intended to include the double-dip deduction in the CARES Act. “The PPP was designed to provide critical relief to America’s small businesses that are experiencing unprecedented economic disruption,” Grassley, Wyden, and Neal wrote. “The PPP was intended to provide a lifeline to allow these businesses to pay rent and keep employees on payroll.”

The three promptly introduced a standalone bill to codify the deduction, and are now leading a push to include the douple-dip in the latest relief bill. If the effort is bipartisan, so is the opposition to it: Mnuchin remains a skeptic, as does Doggett. “Allowing a deduction for an expense never incurred is unjustifiable,” Doggett tells Mother Jones in a statement.

Kimberly Clausing, an economist at Reed College who specializes in trade and taxation, went on Twitter in May to explain why she felt the deduction made no sense. Suppose your small business has $1.5 million in sales and $1 million in payroll and other allowable costs. The pandemic hits and sales drop to $500,000. Damn! Your $500K profit just turned into a $500K shortfall. So you land a $1 million PPP loan. You follow the rules and your loan is forgiven. Clausing offers three scenarios:

Scenario 1: The IRS treats your loan as taxable income, so your overall income is now $1.5 million, as before. But the tax agency lets you deduct the payroll and other expenses covered by your $1 million loan. You are left with $500,000. “This reflects the true profitability of the firm,” Clausing writes.

Scenario 2: The IRS lets you exclude your forgiven loan from taxable income, but it does not allow you to then deduct the covered business expenses. The outcome is the same. You still end up with taxable income of $500,000, and your employees get paid. This is the scenario the IRS favors.

Scenario 3: Here’s the double-dip scenario. The IRS lets you exclude the forgiven loan from your taxable income and lets you deduct those business expenses. Now you have $500,000 in income and $1 million in deductible expenses. You report a $500,000 loss on your taxes, even though you actually made $500,000. This is a giveaway to business owners and the wealthiest investors—who own, according to a 2019 Goldman Sachs analysis, 56 percent of the total value of all equities, public and private, held by U.S. households—none of whom would be under any obligation to pass that money along to the workers. “The wage deduction should not be allowed if loan forgiveness is not included as income,” Clausing tweeted. “Doing otherwise is both very expensive and unnecessary. It also sets a bad precedent for tax policy in the future.”

Congress established the PPP under the CARES Act to help “small” pandemic-battered businesses cover payroll and overhead, but as things turned out, the beneficiaries weren’t necessarily mom-and-pops. During the first round of PPP loans, the banks serving as the government’s intermediaries put their established customers first—ensuring that larger, wealthier firms were bailed out while legitimately small businesses were left hanging. (The banks earned larger transaction fees to boot, based on the larger loan amounts.)

The first batch of recipients included major private equity-owned restaurant chains such as PF Chang’s and Silver Diner, and dozens of publicly traded companies. The latter scored more than $500 million in forgivable loans, the Wall Street Journal reported. Topping the list was AutoNation Inc., whose market cap is north of $3 billion. (Facing public outcry, the Treasury Department changed its guidance on PPP eligibility and some companies returned the money.)

As of July 10, the average loan size was $105,000, according to the Small Business Administration, but more than $177 billion of the $517 total went to about 82,000 entities that got loans in the $1 million to $10 million range. More than $375 billion—close to 75 percent of the total cash—went to businesses receiving $150,000 and up. Rosenthal tallied up the latter recipients and found that, roughly speaking, less than 10 percent were nonprofits, 40 percent were corporations, and half were pass-through businesses.

The overwhelming majority of these pass-throughs were S corporations, LLCs, and partnerships, whose owners tend to be quite wealthy. In 2019, according to the Tax Policy Center, 72 percent of the business income from such entities flowed to the top-earning 1 percent of American households, and 33 percent of the spoils went to the top 0.1 percent. Equity partners in Rosenthal’s profession stand to benefit greatly from a double-dip. The two most prominent PPP applicant categories, according to the SBA, include medical and dental offices and law, accounting, and lobbying practices.

The ostensible goal of the PPP is to keep Americans employed—hence “paycheck protection.” Current rules stipulate that the loans will be forgiven so long as 60 percent of the money goes toward payroll and the rest is used for approved expenses such as rent, mortgage interest, and business utility payments over a 24-week period. Forgiving a loan makes the business whole, Rosenthal argues. But allowing the deduction as well will leave some of the nation’s wealthiest business owners better off than they were before the pandemic.

The rationale for Democratic support of the double-dip, which seems more characteristic of the rival party, has been pretty boilerplate, filled with the usual anguished pleas on behalf of America’s small businesses. Barry Melancon, CEO of the American Institute of Certified Professional Accountants, channeled that sentiment last week in a letter urging House and Senate leaders to include the deduction in the new relief bill. “PPP recipients, particularly the smallest businesses, cannot afford to be surprised with a tax bill on their PPP loan expenses next year.”

Business owners face “enormous challenges,” Gene Marks, a former KPMG consultant who runs a firm catering to “small and medium sized businesses, wrote in an op-ed in The Hill. “But throughout the past few months, they’ve managed to operate and keep their people employed. Maybe they’re one of the countless essential businesses that were allowed to stay open, or maybe they’ve managed to keep things going with their employees working remotely.”

The data, however, doesn’t quite jibe with what most Americans would consider small business. We’re mostly talking about professional firms with up to 500 employees, and C corporations—including public companies with hundreds of millions of dollars in revenues. But another thing that makes the deduction more palatable is that it doesn’t appear to cost anything on paper. For whatever reason, the Joint Committee on Taxation—the body that writes tax legislation based on the intent of the Ways and Means Committees and publishes estimates for the cost of each provision—appears not to have included in its CARES Act analysis an estimate for the cost of forgiving PPP loans.

For the HEROES Act, based on the notion that the double-dip deduction had been Congress’ intent, the JCT—of which both Grassley and Neal are members—scored the deduction as a technical fix with “no revenue effect.” This is bureaucratic subterfuge. Any way you slice it, the deduction will have a rather large revenue effect. The JCT’s failure to score the deduction, however, would make it easier to obscure the fact that Treasury may soon be channeling another $100 billion or more to some of America’s most privileged individuals. “This approach provides the most for the insiders who got the biggest and quickest PPP loans,” Doggett says. “Treating this unwarranted multi-billion-dollar bonus for PPP winners as a technical correction with no cost is inexplicable.”

Frank Clemente, executive director of the nonprofit Americans for Tax Fairness, which is pressing Congress to nix the deduction, says, “This is a ridiculous tax break that will just give businesses more money without the public knowing about it. They get a subsidy at the front end from taxpayers and then use that subsidy to claim it as a business expense to reduce their taxes at the back end. It’s Alice in Wonderland stuff.”