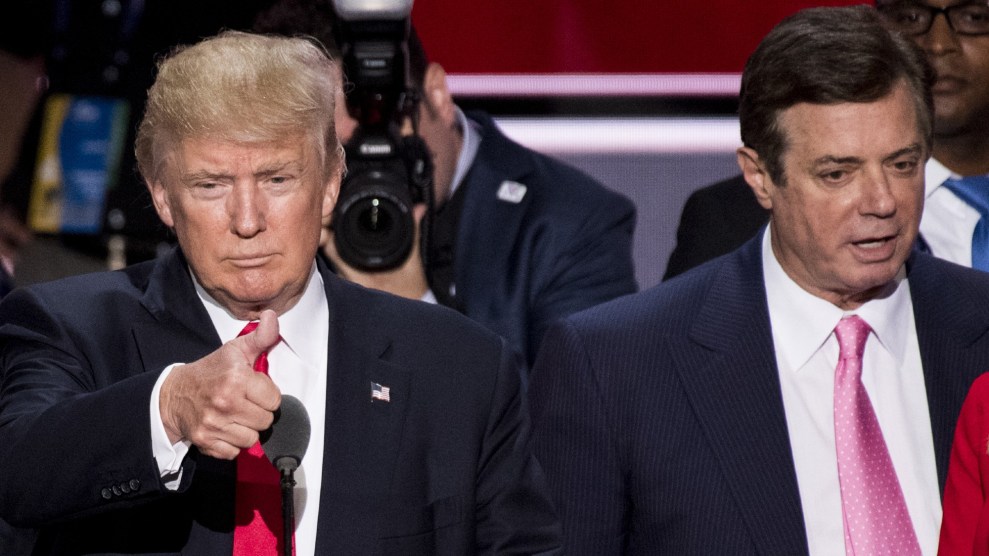 By pardoning Paul Manafort and Roger Stone on Wednesday night, President Donald Trump concluded a four-year campaign to use his office to cover up his own wrongdoing in the Trump-Russia scandal. Trump aided and abetted Vladimir Putin’s attack on the 2016 election—which had the aim of helping Trump win the White House—by denying this assault was real, while he simultaneously sought to exploit Moscow’s operation for his own political gain. Ever since, Trump has strived to keep this scandal from defining his presidential victory and his presidency, and he has endeavored to hide his own possible criminality. With these pardons, that effort, which has largely succeeded, is complete.

Stone and Manafort were among 26 pardons and three commutations Trump issued Wednesday, following a batch on Tuesday. This slew of pardons is collectively corrupt. While ignoring thousands of Americans who may deserve clemency but lack the political juice to win presidential assistance, Trump singled out for special dispensation war criminals, the powerful and the connected, friends of his allies, the father of his son-in-law, and corrupt former Republican congressmen. But Manafort and Stone are in a special category.

Their pardons are part of Trump’s crusade to take revenge on Special Counsel Robert Mueller and his investigation that detailed the Russian attack that helped Trump win, that led to criminal convictions of Trump aides, and that provided evidence arguably showing that Trump had obstructed justice. But the pardons are more than that. They aim to help Trump himself.

Stone and Manafort were each involved in the Russia scandal as it proceeded in 2016, while reporting directly to Trump. Stone promoted the false story that Moscow was not behind the leaks targeting the Democratic Party and the Hillary Clinton campaign, as Trump tried to use him to gather inside information on the WikiLeaks-Russia operation. And throughout the campaign, Manafort was in covert communication with a former business associate, Konstanin Kilimnik, who was labeled a “Russian intelligence officer” in a recent Senate Intelligence Committee report. That report noted Kilimnik “may have been connected to the [Russian intelligence’s] hack and leak operation targeting the 2016 U.S. election” and that information gathered by the committee raised the “possibility” that Manafort himself was connected to this operation.

So top Trump lieutenants were part of the Russia business. Yet they subsequently lied to or refused to cooperate with investigators. They hid information from prosecutors and the public. They covered for Trump. Now he has rewarded them.

In 2016, Stone was seen by the Trump campaign as its “access point” to WikiLeaks, according to former senior Trump aide Steve Bannon, who testified during Stone’s 2019 trial. During the election, Stone gave the Trump campaign advance notice as WikiLeaks prepared to dump emails that Russian agents had stolen from the Clinton campaign and Democrats and passed to the transparency group. He was regarded within the top echelons of the campaign as a Trump operative who could gather inside information from WikiLeaks that the Trump team could exploit.

Other testimony at the trial showed that Stone, a self-described dirty trickster, conferred regularly with Trump during the campaign. Rick Gates, a former Trump campaign aide, testified that on July 31, 2016—nine days after WikiLeaks had dumped tens of thousands of hacked emails from the Democratic National Committee—he witnessed Trump take a call from Stone. Gates said he couldn’t hear what Stone told Trump but that after the call Trump “indicated that more information would be coming.” (Stone was convicted of lying to Congress, obstructing a congressional investigation, and witness tampering, and he was sentenced to 40 months in prison. Trump commuted that sentence before Stone started serving it.)

In 2018, Trump told Mueller in writing that he could not recall talking to Stone about WikiLeaks at all during the 2016 campaign. Gates’ testimony suggested that Trump lied to Mueller—which could be a federal crime. Stone obviously could have cleared this up for investigators, but he refused to cooperate, and he lied to congressional investigators about his efforts to obtain information for Trump from WikiLeaks. He could have explained what Trump knew of his dealings with WikiLeaks and how the campaign sought to capitalize on the Russian attack. But he chose not to talk.

Manafort, who was sentenced to seven years in prison in 2018 for obstruction of justice, tax and bank fraud and violating foreign lobbying laws, ran Trump’s campaign from late June to mid-August 2016. In that role, he kept tabs on Stone’s interactions with WikiLeaks, according to Gates. At the same time, he was in steady communication with Kilimnik. For reasons that remain murky, Manafort gave Kilimnik polling data to pass on to Ukrainian and Russian oligarchs, including Oleg Deripaska, a Russian aluminum magnate close to Putin. “Manafort’s high-level access and willingness to share information with individuals closely affiliated with the Russian intelligence services, particularly Kilimnik and associates of Oleg Deripaska, represented a grave counterintelligence threat,” the Senate Intelligence Committee report said.

And there were other curious aspects to Manafort’s relationship with Kilimnik. In a secret meeting in Manhattan on August 2, 2016, and in subsequent contacts that stretched into the following year, Kilimnik pressed Manafort to convince Trump to back a plan that would have handed Putin effective control of much of Eastern Ukraine, which Russia invaded in 2014. According to Mueller’s 2019 report, Kilimnik told Manafort in an email that the plan need only “a very minor ‘wink’ (or slight push) from [Donald Trump]” to succeed.

Mueller’s investigators believed Russia hoped to obtain Trump’s support for this so-called Ukraine peace plan as a payback for helping Trump in the election. In a book published this year, Andrew Weissmann, a top Mueller aide who oversaw the Manafort prosecution, called Trump’s possible backing of the Ukraine plan “a ‘quo’ for all the elaborate ‘quid’” that Russia had provided Trump in 2016.

Manafort may never have told Trump about this phony peace plan. Mueller discovered no evidence he did. But Mueller found that Manafort, even after he agreed to cooperate with his probe, had lied excessively to prosecutors about the peace plan and other topics. Mueller terminated Manafort’s cooperation deal as a result. According to Weissmann, prosecutors believed Manafort had decided to lie to prosecutors based on the hope that Trump would pardon him if he did not implicate the president in any wrongdoing.

Trump gave Manafort ample reason to believe this. During Manafort’s 2018 trial, Trump praised him and Stone for their refusal to “flip” and cooperate with Mueller. This pardon dangling provided Manafort, Stone, and others incentive to adhere to a code of silence. What exactly Manafort was up to with Kilimnik and what Stone did with WikiLeaks remain mysteries. As does Trump’s full knowledge of their activities related to Russia’s scheming.

Trump and his enablers will continue to claim falsely that the Russia scandal was a hoax. But the reports from Mueller and the Senate Intelligence Committee show this was a profoundly serious matter that included what appears to be significant wrongdoing on the part of Trump’s campaign, his aides, and Trump himself. With these pardons, Trump made sure the public would not learn the full story about their recipients—or about his own suspicious actions. With this use—or abuse—of presidential power, Trump is not only protecting his henchmen; he is protecting himself. These pardons don’t end the scandal; they are part of it.