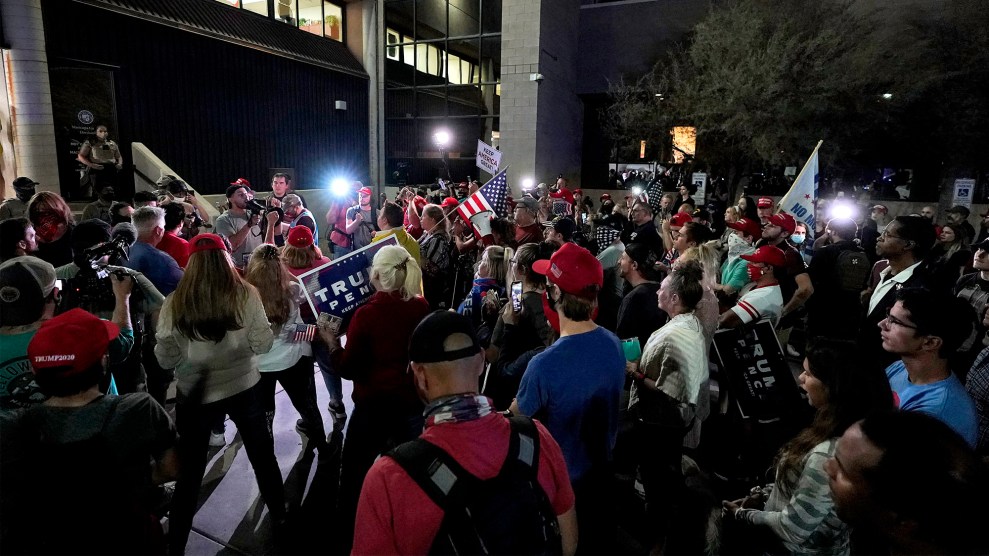 The Trump campaign has filed a series of lawsuits since Election Day to stop the counting of votes or challenge counting procedures in Pennsylvania, Michigan, Georgia, and Nevada. The goal is to prevent ballots from being counted in states where Trump’s lead is slipping away, like Pennsylvania, or to throw out enough Democratic votes to put him ahead in others, like Michigan.

But these are hail-Mary lawsuits that are unlikely to succeed or make a meaningful difference in the vote count.

In Georgia, for example, the Trump campaign filed a lawsuit in Chatham County claiming that 53 mail ballots arrived after Election Day and should be thrown out, based on the testimony of a GOP poll watcher. But election officials said the ballots arrived before the deadline, and the lawsuit was quickly dismissed on Thursday.

Similarly, Trump went to court in Montgomery County, Pennsylvania, to claim that voters should not be given a chance to fix problems with their mail ballots. But a federal judge appointed by George W. Bush was skeptical of those claims. “I do not understand how the integrity of the election was affected,” said Judge Timothy Savage. And only 93 votes fall into that category, a number very unlikely to affect the outcome of the election in Pennsylvania, where Biden is expected to be leading by 100,000 votes or more after the outstanding votes are tallied.

In Michigan, which has already been called for Joe Biden, the Trump campaign wants to stop the counting of votes because Republican poll watchers were not allowed to monitor the collection of mail ballots from drop boxes. Those ballots were collected by trained election officials and there is no evidence of improprieties. On Thursday afternoon, a Michigan judge denied Trump’s motion to stop counting ballots.

Even if a few of these lawsuits succeed, they’re unlikely to change the results of the election.

The Trump campaign won a lawsuit in Philadelphia on Thursday allowing GOP poll watchers to monitor ballot counting from six feet away—but that won’t stop the counting of votes or change the results.

In addition, the Trump campaign intervened in a lawsuit before the Supreme Court challenging a Pennsylvania Supreme Court decision to accept mail ballots that arrive three days after the election as long as they were sent by Election Day. But Republicans already unsuccessfully appealed to the Supreme Court twice before the election to block these ballots, and even if the court invalidates late-arriving ballots, it wouldn’t alter the counting of ballots that arrived by Election Day, which are expected to put Joe Biden over the top.

Instead, the real purpose of the lawsuits is to sow chaos and confusion, Biden campaign counsel Bob Bauer argued on Thursday. “The vote count is not going to stop,” he said. “This is part of a broader misinformation campaign.”

Indeed, Trump is using the lawsuits to amplify his false claims about how ballots are counted, which are encouraging his supporters to resort to intimidating actions, like angry crowds chanting “stop the count” in Detroit or attempting to disrupt the counting of ballots in Maricopa County, Arizona.

That raises the scary prospect that even if Trump loses these cases in court, as seems likely, he will still succeed in his larger goal of delegitimizing the election, which may make it harder for Trump and his supporters to accept a peaceful transfer of power.