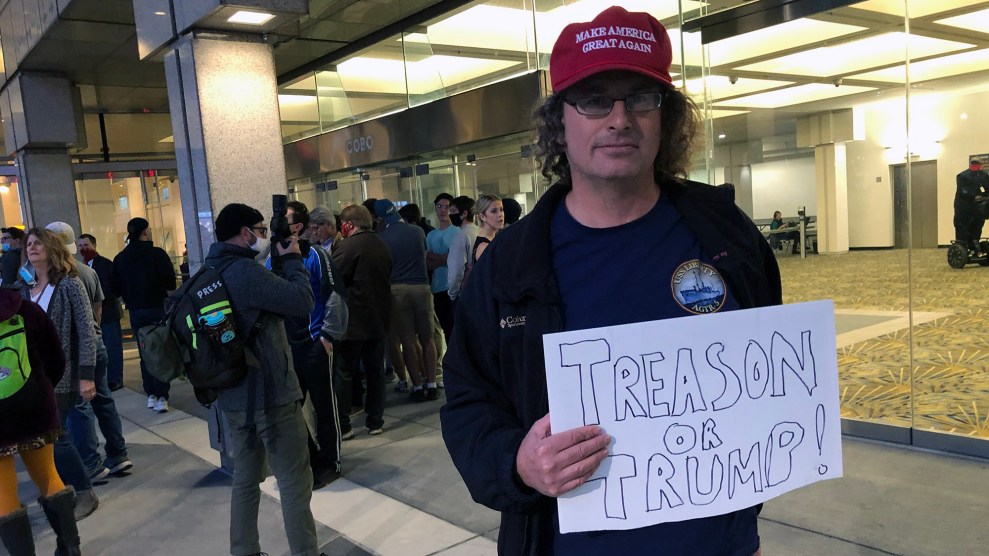 Marc Murawski, outside of the TCF Center in downtown Detroit. AJ Vicens

Marc Murawski, curly hair falling to his shoulders out of his floppy Make America Great Again hat, stood outside the TCF Center in downtown Detroit on Wednesday afternoon, telling everybody who’d listen that the president had been wronged. He had made the 45-minute trek here from Ann Arbor because treason was afoot.

Murawski was one of dozens of mostly maskless Trump supporters who flocked to the place where Detroit election workers were tabulating ballots from around the city. Rules allowed for a representative from each party to act as “challengers” at each of the stations representing the city’s 134 voting precincts. When city officials determined that there were too many people the room, they cut off access, and Trump supporters cried foul. Calls went out for support on social media—at least one from a private Facebook group previously dedicated to protesting COVID-19 restrictions, according to NBC News. Requests for support had also come from the state Republican Party, via text message and possibly via email.

When they couldn’t get in, the demonstrators tried to rush the door, then began banging on windows looking into the room, according to reports. Chants of “stop the count!” filled the hall.

At about 2:30 in the afternoon, Jordan Acker, an accredited Democratic challenger, tweeted video of Trump supporters crowding the door to the counting room, shouting and demanding to be let in:

In fact, the ⁦@MIGOP⁩ has so overwhelmed the Detroit vote counting room with “challengers” (most who are not lawyers), preventing actual Dem lawyers from actually getting in. Sure feels like a deliberate attempt to try to steal the election. pic.twitter.com/pIZCzUB6VH

“A whole group come down the stairs chanting, ‘Stop the count! Stop the count!'” Acker told me. “Really, they were trying to stop Detroiters from getting their votes counted. These are legitimate voters—they are people who turned in their ballots before the deadline—and they’re just counting the votes.”

Acker said it was clear that this was some sort of coordinated event, given the way the people came down the stairs together and rushed straight for the door. But Murawski insisted it was “just a bunch of concerned people who realized something fishy’s going on. People inside were sending SOSes out to the world that we need more poll watchers.”

At one point, a Trump supporter inside the building held a sign to the window encouraging the supporters locked outside: “Prez Trump Wants U To Chant “Stop The Count.“

As the afternoon dragged on, several news agencies, including Fox News, declared Vice President Joe Biden the winner of Michigan, even as the Trump campaign filed a lawsuit seeking to stop the counting, alleging that its volunteers did not have access to the counting process. Just before 5 p.m., Trump tweeted that “for Electoral Vote purposes,” his campaign had “claimed” Pennsylvania, Georgia, North Carolina, where he’d had a big lead. “Also,” he went on, “we hereby claim the state of Michigan if, in fact, there was a large number of secretly dumped ballots as has widely been reported.”

Michigan Secretary of State Jocelyn Benson told reporters Wednesday night that Trump’s lawsuit was “frivolous” and “without merit,” and dismissed concerns about the protesters.

“As for the folks who showed up in the late hours outside to cause a lot of distraction and make a lot of noise, I’ll just say if they were going to intimidate or stop anyone from doing their job inside the TCF Center, then they don’t know Detroit.”

Jeff S.—who wouldn’t confirm the spelling of his last name because he doesn’t “want to get Antifa on me, dude”—was another Trump supporter who came to Detroit after talking to someone from the state Republican Party. He’d been told they needed people to go “down and be at the protest.” Jeff had been a poll challenger the day before in Ypsilanti, a city a short distance to the west of Detroit, so he figured he’d come down and help.

“This is a bull-crap process,” Jeff said. “It’s not legal what’s going on. If you’re kicking the observing party out to keep balance in the system, who knows what they’re doing in there. They could be making ballots all day long.” He also described a story he’d heard about a mystery car pulling up in the middle of the night “with ballots,” only to be confronted by a Republican lawyer. “The guys freak out,” he said. “They slam it back in their trunk and take off.”

I asked where that lawyer was now. “He left,” Jeff said.

Jeff also said he heard that some of the machines in the process were connected to the internet, a major security risk, and also that the election workers were adding names to the registered voter lists without knowing whether those people were, in fact, registered when they cast their ballot. Again, asked for proof, he said it was just what he’d heard. Another thing he’d heard? There were more votes than registered voters, just like Wisconsin. “That’s impossible,” he said. When asked where he saw that, he said Facebook.

Jeff said he would ultimately support a result that showed Biden won if the whole process was started over, third-party observers were brought in, and every ballot was re-reviewed to make sure it’s valid. Jeff said it was hard to believe that Trump would have been up on election night only to fall behind once mail ballots were counted. Despite the months of predictions of this exact scenario, it didn’t make any sense to Jeff. “The question is, are dead people still on the rolls? Are people registered to vote that [voted]? And the third thing is that everybody gets one vote, not two, not six.”

I asked Murawski if he’d ever accept that Trump legitimately lost the election. “No,” he said. “It’s been too shady, too strange, too many anomalies.” He paused, thought for a second. “I’ll accept it when Donald Trump accepts it.”