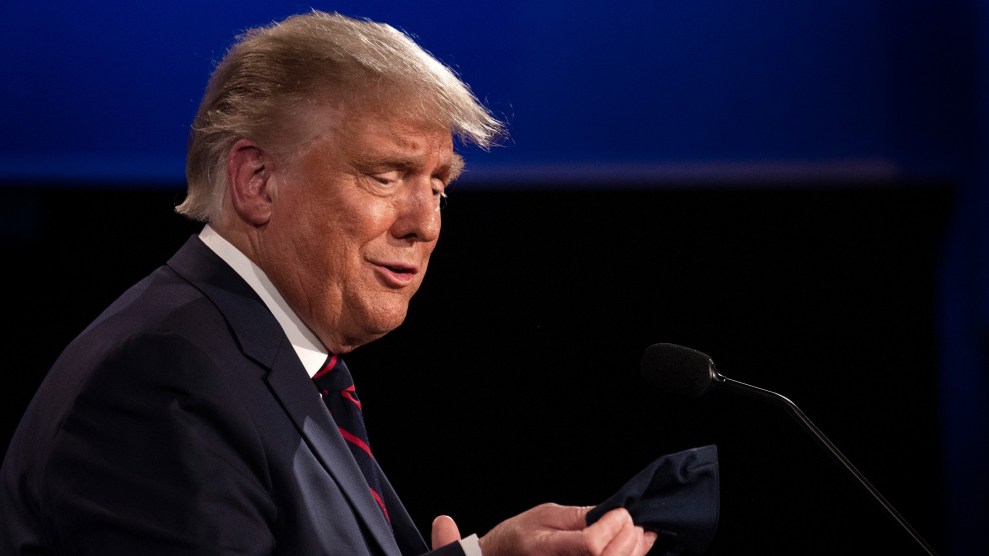 It’s been a little more than two days since President Donald Trump said that he had tested positive for COVID-19. We now know that a White House event last month celebrating the Supreme Court nomination of Amy Coney Barrett turned into a likely super-spreader event for Trump and his inner circle, many of whom did not properly distance or wear masks, but we know much less about the timing of the positive tests and how early they were known before being announced to the public.

On Saturday, after Trump was moved to Walter Reed National Military Medical Center, his physician Sean Conley said the president was “doing very well” and “just 72 hours into the diagnosis now,” which suggested that he tested positive on Wednesday, despite Trump tweeting that he learned of his diagnosis on Thursday night.

Tonight, @FLOTUS and I tested positive for COVID-19. We will begin our quarantine and recovery process immediately. We will get through this TOGETHER!

Hours later, Conley released a statement saying he misspoke. “I incorrectly used the term ‘seventy two hours’ instead of ‘day three’ and ‘forty-eight hours’ instead of ‘day two’ with regards to his diagnosis,” Conley said, even though, as Axios noted, the “forty-eight hours” comment was made by a different doctor at the press conference, not Conley. That means two different physicians working for Trump managed to confuse the timing of his diagnosis by more than a full day.

To make things even more confusing, an anonymous White House official—later revealed to be Chief of Staff Mark Meadows—told reporters following Conley’s briefing that Trump was not actually doing as well as his doctors claimed. “The president’s vitals over the last 24 hours were very concerning and the next 48 hours will be critical in terms of his care,” Meadows told a White House pool reporter. “We’re still not on a clear path to a full recovery.”

The only thing clear right now is how much is being kept secret about Trump’s health. We still don’t know when he tested positive for the virus or when he had his most recent negative test. We don’t know whether he was tested before the debate in Cleveland on Tuesday night against Joe Biden, who said Friday he tested negative for the virus and pledged to disclose the result from his future coronavirus tests.

If his doctors’ original comments were true—that he tested positive as early as Wednesday—it makes for an absolute scandal that Trump attended a large outdoor rally in Minnesota on Wednesday night and went to a fundraiser at his New Jersey golf club on Thursday night. At the event, where Trump took photos with guests, most people did not wear masks, CNN reported. Before attending the fundraiser, Trump knew he either had the coronavirus or was aware he had been in close contact with someone who was infected. Trump was informed earlier that day that one of his advisers, Hope Hicks, had tested positive. Maggie Haberman, the New York Times White House correspondent, told the New Yorker that the “White House had tried keeping secret” news of Hicks’ diagnosis, but eventually was forced to confirm it after Bloomberg broke the news after 8 p.m. on Thursday.

The timeline is key to any assessment of how reckless Trump and his advisers were with his health (and their own—not to mention the hundreds of people they likely encountered, and their families). “It is really important for voters to drill down on the question of the seventy-two hours,” Haberman said. “It raises questions about what they would have told the public if we hadn’t found out about Hope Hicks.”