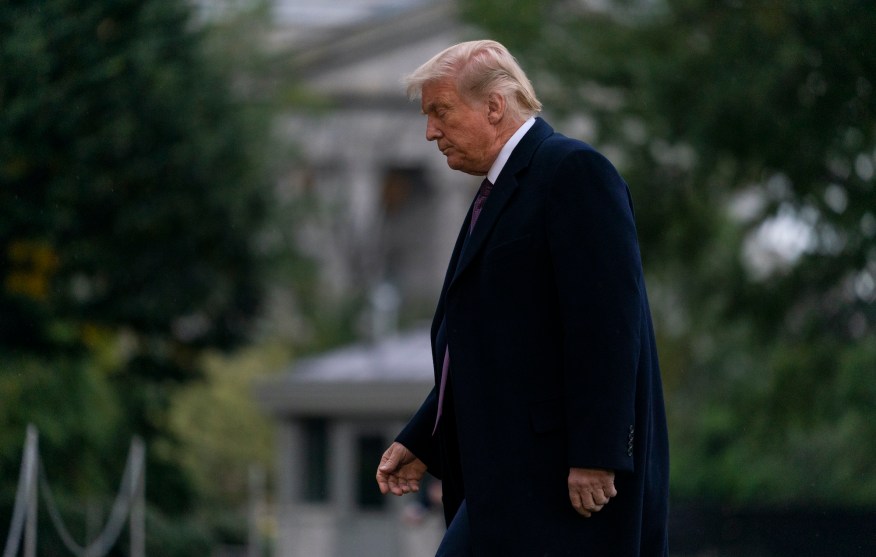 President Donald Trump walks from Marine One to the White House in Washington, Thursday, Oct. 1, 2020, as he returns from Bedminster, N.J.AP Photo/Carolyn Kaster

President Donald Trump, who announced on Friday that he had tested positive for COVID-19, did not wear a mask during a Thursday afternoon campaign fundraiser at his Bedminster, New Jersey, golf club, according to a person who was at the club. Trump mingled with the crowd of about 150 donors, at one point going table-to-table to shake hands with attendees, according to the source, who asked not to be identified. This behavior is typical for Trump when he visits the club—members often approach him to shake hands and chat. But this time, Trump may have been contagious.

On the day of this fundraiser, the Trump National Golf Club Bedminster was also hosting its largest golf tournament of the year, a member-guest invitational that this year drew more than 180 players. These participants were at the course and the club’s facilities throughout the day. Cameras and phones were not allowed inside Trump’s fundraising event, which took place in the early afternoon, but on social media several attendees posted pictures of themselves taken before or after the event. One guest, Patti Schecter, bragged late Thursday that she and her husband had their photos taken with the president and then sat 20 feet away from him while he addressed the crowd.

Absolutely amazing day having my photo taken with the GOAT, President Trump!!! And then 20 feet front and center while he addressed the crowd and took questions. Seriously overwhelming. God bless him and MAGA2020

Early Friday morning, Schecter wrote on Facebook (in a post that has since been made non-public or deleted) that she was with Trump for as long as 30 seconds but believed that she wasn’t in any danger because Trump was asymptomatic. Later on Friday morning, it was reported that Trump had exhibited symptoms during his trip to New Jersey. According to several news reports, Trump appeared to be lethargic at the event and did not stay afterward to socialize as he usually does.

Other donors are reported to be upset about the likelihood that Trump was contagious during their interactions with him.

Scoop: GOP donors are panicking after being around President Trump during a fundraiser at his golf course in Bedminster. 30 to 50 donors were close to six feet of the president at the event, most of the interaction was outside.https://t.co/mhC9cWPNsZ

The event appears to have taken place in violation of the state of New Jersey’s pandemic rules, which allow for gatherings of no more than 25 people and mandate that all attendees wear masks and stay six feet apart. On Friday morning, New Jersey governor Phil Murphy urged anyone who attended the event to get tested.

We urge everyone who attended yesterday's event in Bedminster to take full precautions, including self-quarantining and getting tested for #COVID19.