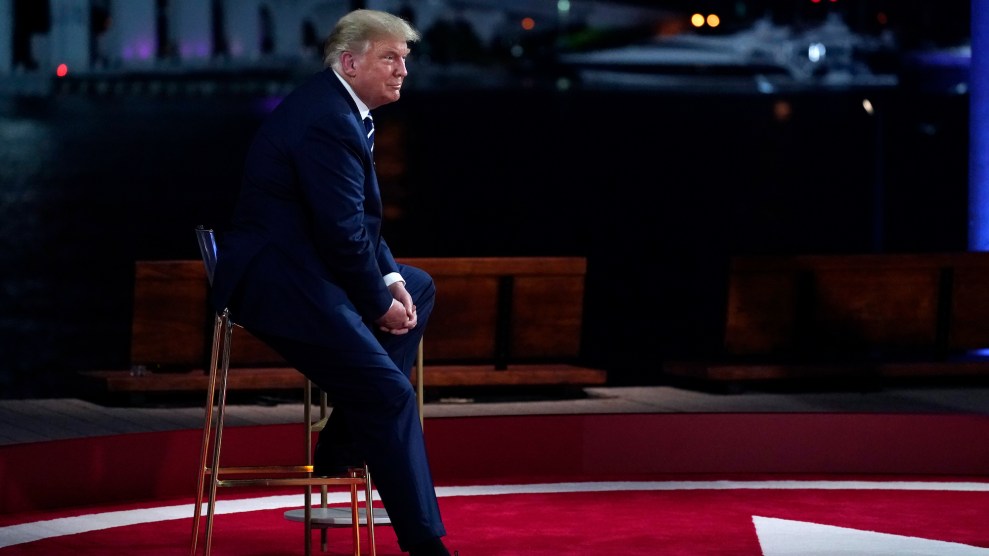 Last month, in the first installment of its series on Trump’s taxes, the New York Times noted—as Mother Jones had previously reported—that Donald Trump has more than $400 million in debt coming due over the next four years. Seizing on this data point, commentators and politicos have demanded he reveal his creditors. Kamala Harris raised the issue during last week’s vice presidential debate, saying, “it’d be really good to know who the President of the United States, the commander-in-chief owes money to because the American people have a right to know what is influencing the President’s decisions.” At last night’s NBC town hall, Savannah Guthrie also pressed Trump on his debts. “Who do you owe $421 million to?” she asked. Trump, for his part, obfuscated.

But the controversy over Trump’s creditors misses the point. It is known—mostly—who has him on the hook. The real issue is this: How does Trump—whose businesses were faltering before the coronavirus pandemic and have been battered since then—plan to handle these soon-to-be-due debts?

This is what we know about Trump’s liabilities based on the personal financial disclosure forms he’s filed annually since 2015 and other public records: he has at least fourteen loans through seven lenders. According to Trump’s disclosures (where assets and debts are reported in ranges), these loans could total more than $650 million. There is, of course, a big caveat here: We are assuming that Trump has been truthful in these filings. It’s illegal to lie on them, but they are not audited.

The amount of money Trump owes and to whom is important because, as Mother Jones has been reporting since before Trump took office, these debts pose an unprecedented conflict of interest. They are a point of leverage over a serving president, and intelligence experts say Trump’s debts are not only an ethical problem but a national security one.

Last night, when Guthrie questioned Trump about the New York Times‘ recent revelations about his taxes and and finances, she asked him whether he owed money to any foreign banks. “Not that I know of,” Trump replied. It was a surprising—and glaringly false—claim. His biggest (and over the past decade primary) lender is German financial giant Deutsche Bank, which has lent him at least $320 million. And all of this debt is coming due in the early years of a theoretical second Trump term.

In June, Mother Jones reported on these and other loans that Trump will need to pay off or refinance in the next four years. Based on Trump’s disclosures, we estimated the outstanding amount at $479 million. The Times, using Trump’s tax returns, pegged the figured at $421 million. These are Trump’s maturing debts:

So we know who Trump owes and about how much he’s responsible for (again, see the caveat above). The big unknown is how Trump plans to handle these debts. It’s an issue because as wealthy as Trump may be—he does own some valuable assets—he doesn’t necessarily have much cash. The Times story, based on an analysis of his tax returns, portrayed a man who gets cash windfalls—from his father’s estate, from his work on the Apprentice, and from various endorsement and licensing deals—and then immediately blows it and needs to go searching for money. A number of Trump’s properties are far from profitable and some, like his Scottish resorts, are hemorrhaging cash.

Paying the loans off, in other words, doesn’t seem like an option. His last financial disclosure shows that at the end of 2019 Trump had anywhere between $46.7 million and $156.6 million available in checking or money-market accounts. He does of course have assets he could sell. Indeed, prior to the pandemic, the Trump Organization was floating the sale of its DC hotel, and, more recently, Trump’s company has talked of selling a Westchester estate that Trump unsuccessfully tried to turn into a golf course.

If Trump can’t pay off the debts, he needs to refinance them. But banks were not keen on dealing with Trump before he became president. Who on Earth would lend Trump money now? As we reported this summer:

Nancy Wallace, a real estate finance professor at University of California, Berkeley’s Haas School of Business, says the scrutiny that Deutsche Bank has faced may scare off other banks. “I think any bank I can think of in the United States would have exactly the same response: He is toxic. Exposing yourself to that kind of oversight under the current regulatory reality, for lenders who are large enough to provide capital to him, is just a nonstarter.”

Deutsche Bank has reportedly already told Trump it will not do business with him while he is in politics. And he has not been a good partner to work with.

Although Trump and the Frankfurt-based bank pulled off several profitable deals, eventually Deutsche’s commercial lending division learned the hard way one reason why other banks considered him persona non grata: If pushed by his creditors on payments, Trump shoves back. In 2008, after he defaulted on a loan for his Chicago hotel and condo development, he filed a multibillion-­dollar suit accusing Deutsche Bank and others of contributing to the recent financial meltdown, which he blamed for his inability to repay the loan.

Non-bank lenders like Ladder Capital, which typically charge higher interest and aren’t as flexible about repayment, could be an option for Trump. But these type of firms tend to operate purely on numbers. Because they securitize loans, they’re not terribly interested in who you are or your history. They simply want to ensure that these loans will produce a profit for investors. On at least some of Trump properties—his golf courses in particular—the numbers don’t work, experts say.

Kevin Riordan, a longtime real estate finance executive and director of Rutgers University’s Center for Real Estate, says that Ladder prospered in its previous dealings with Trump—but he notes that the economics have changed. Ladder and its competitors in the commercial mortgage-backed securities (CMBS) industry can only lend if there’s a market for real estate bonds, which could dry up during a financial crisis. “This is a whole different ballgame today,” he says. He adds that in recent years the CMBS industry largely ceased financing golf courses—because they are seasonal businesses, they are not considered a safe bet.

“The world has changed a lot since 2012, and I think the Trump Organization is ill-suited for this new world,” [Nancy] Wallace says. “That’s not to say there’s not some private equity firm out there that would be very tempted if he was willing to pay a very high coupon.”

And that’s exactly what Trump may be left with—turning to the private equity world or to more “opportunistic lenders,” as one former Trump banker put it. When it comes down to it, there are no shortage of financial players—conservative billionaires, foreign banks, sovereign wealth funds—who would be willing, perhaps even eager to help Trump out of a refinancing jam. Of course, that raises the troubling question at the heart of the issue: what might Trump’s financial savior want in return?