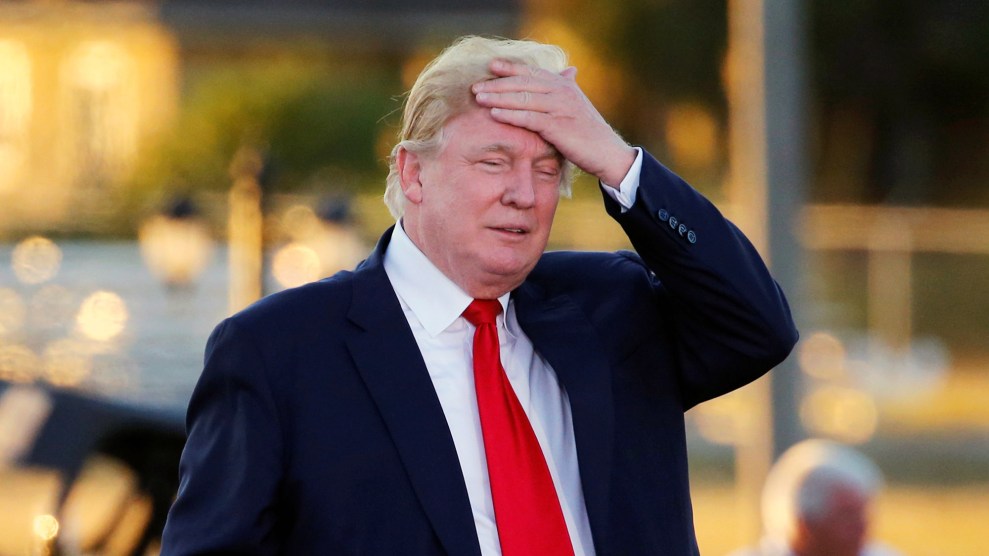 Donald Trump has announced that on December 15 he will hold a press conference to reveal to the world his plan to address the many conflicts of interest between his vast business empire and his new role as president. Trump has indicated that he will remove himself from the daily “business operations” of the Trump Organization—but not sell off his holdings or create a truly blind trust.

Ethics experts have criticized this approach because Trump would continue to own his properties, benefiting from their success and suffering from their losses. He would know when his policy decisions and actions—or those of others (including corporations and foreign governments)—could affect his assets. Consequently, he would not be separating his presidential decision-making from his own personal financial circumstances. Yet, arguably, the biggest conflicts he faces aren’t related to what he owns. Rather, they relate to what he owes.

All of Trump’s top properties—including Trump Tower, the Trump National Doral golf course, and his brand new luxury hotel in Washington, DC—are heavily mortgaged. That means Trump maintains critical financial relationships with his creditors. These interactions pose a significant set of potential conflicts because his creditors are large financial institutions (domestic and foreign) with their own interests and policy needs. Each one could be greatly affected by presidential decisions, and Trump certainly has a financial interest in their well-being.

Below is a list of all the financial players that Trump owes money to and how much Trump directly has borrowed from each one. This roster is based on publicly available loan documents. According to his own public disclosure, Trump, as of May, was on the hook for 16 loans worth at least $713 million. This list does not include an estimated $2 billion in debt amassed by real estate partnerships that include Trump. One of those loans is a $950 million deal that was cobbled together by Goldman Sachs and the state-owned Bank of China—an arrangement that ethics experts believe violates the Constitution’s emolument clause, which prohibits foreign governments from providing financial benefits to federal officials.

The troubled German bank is Trump’s top lender and has been for years. When the rest of Wall Street essentially abandoned Trump years ago, apparently frustrated by his business tactics, Deutsche Bank stuck by the celebrity developer. Well, not all of Deutsche Bank. In 2005, Trump borrowed $640 million from a group of banks, including Deutsche Bank, to build his Chicago tower. But by 2008, the real estate market had gone bad, and Trump was in financial trouble. Shortly before he was due to pay Deutsche Bank $40 million for a portion of the loan he had personally guaranteed, Trump filed a lawsuit against the German bank, demanding $3 billion to compensate him for the international economic turmoil that Trump claimed the bank had helped cause and that Trump now said was hurting his investment in Chicago.

The dispute was eventually settled, but Trump’s relationship with the division of the bank handling big commercial loans was done. Instead, he began working with what’s known as the “private bank” side of Deutsche Bank—the division that caters to high-net-worth individuals and that has significantly more leeway to lend money. His various corporations now have four outstanding loans from that part of Deutsche Bank, worth a combined $364 million.

Trump has an enormous conflict of interest on his hands with Deutsche Bank. As Trump himself noted in his 2008 lawsuit against the bank, Deutsche played a prominent role in the run-up to the 2008 financial crisis. The Obama administration has targeted Deutsche Bank and other banks for creating and repackaging bad mortgage products, and earlier this fall the Justice Department announced it was seeking to settle claims against the bank for about $14 billion. That was much more than Deutsche Bank was expecting to pay, and the news sent the bank into a tailspin. Its stock price plummeted amid speculation that it could not remain afloat if the Justice Department pressed the bank for such a big settlement.

Negotiations between the bank and the Justice Department over the size of the settlement are underway. But if they are not resolved by January 20, Trump’s administration will be in charge of handling this case. So a federal government run by Trump will have to decide how hard to push the bank that Trump owes so much to and that has been critical to Trump’s personal fortunes.

Ladder Capital is not a traditional bank or a big name on Wall Street, but in the last several years it has joined Deutsche Bank as a main source of financing for Trump. In fact, since 2012, these two outfits have been the only ones to lend Trump money. Ladder Capital is a small Wall Street firm that specializes in loaning money for commercial real estate projects and, with the help of the big Wall Street banks, combining pieces of these loans into bigger packages that it then sells to investors.

One big issue with Trump’s loans from Ladder Capital is that he appears to be personally liable for at least $26 million of the debt. So if a problem with the loan emerges, Ladder Capital could ask Trump, not his business, to cover this amount personally. Even if Trump does remove himself from the operations of the Trump Organization and lets his adult children run the business, this conflict of interest would not be addressed. The man in the Oval Office would still be in hock to this financial institution.

There’s another major issue with the Ladder Capital loans. As was reported last week, Ladder Capital has hired Citibank to help organize a possible sale. Sources at the firm told Reuters that new federal regulations covering the repackaging of loans were making the company’s core business more complicated.

It’s possible, then, that if the firm does go on the block, Trump’s loans could end up being bought by another party. It could be an investor or a financial institution based in the United States or overseas. Imagine, say, a Russian bank owning the debt of an American president. In any event, another troubling conflict of interest could exist—and the public might not even know about this at first, because Trump would be under no obligation to update the personal financial disclosure until it was time to file his annual disclosure report.

Trump’s loans with Ladder Capital include:

In 2010, Trump combined an earlier mortgage on his Westchester County, New York, golf course into a much larger $23 million mortgage that also leveraged his ownership of condo units in the Trump Park Avenue building in New York City.

In 2010, Trump took out a mortgage on his Trump National Golf Club-Colts Neck in Monmouth County, New Jersey, for $16 million from Amboy Bank, a tiny New Jersey bank.

In 2009, Trump purchased a golf course in Loudon County, Virginia, for $13 million. To make the deal happen, he borrowed $10 million from the land development company that previously owned the property.

Trump’s personal financial disclosure lists bonds, first issued in 1996, against a commercial property on New York’s East 56th Street. Paperwork filed with the state of New York shows the due date on the bonds has been extended to 2020.

In 1995, Trump purchased a lavish estate in Westchester County, New York, and in 2000 he refinanced that purchase with an $8 million mortgage from the Royal Bank of Pennsylvania. Trump originally planned to turn the large estate into a golf course, but opposition from local residents blocked the project. The property has been used as a family retreat and a playground for Trump’s two oldest sons. Trump has long had a personal relationship with the bank’s founder, and he allowed the banker’s 10-year-old grandson to perform magic tricks at Trump’s Taj Mahal casino in Atlantic City, New Jersey.