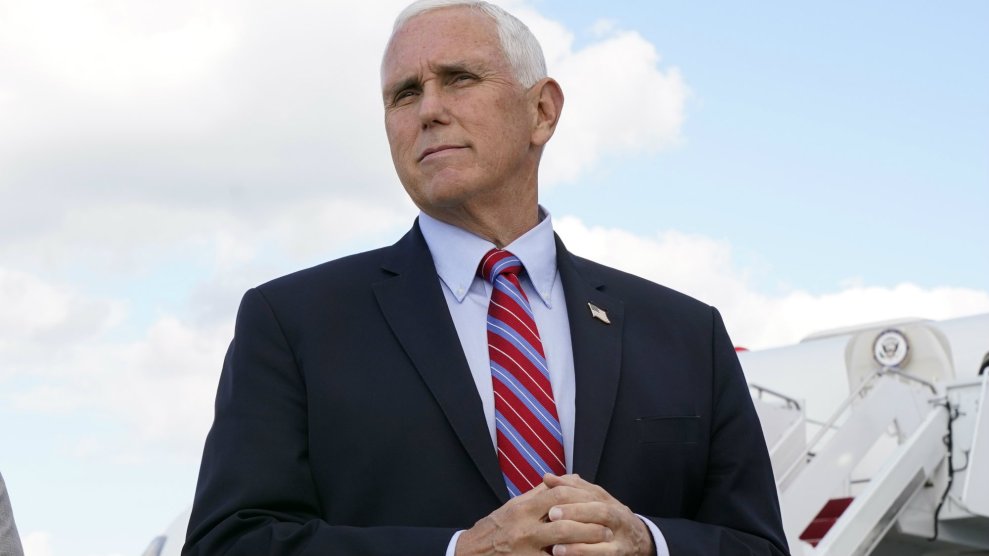 At the debate venue at the University of Utah, masks were required and candidates were separated by plexiglass, a visual reminder of this administration’s failure to respond to a public health crisis that has resulted in monumental death, suffering, and economic devastation. Plus, after months of denying its seriousness, the president is now suffering from the disease that also has torn through his White House staff and the Republican Party. Since March, Pence has been the head of the White House coronavirus task force, and it’s an understatement to say he’s done a bad job. But instead of recognizing the peril the country is in and promising a more effective response (because taking some responsibility for the catastrophe is beyond him), Pence dodged, deflected, and lied his way through the 90 minutes. His strategy? Normalize the chaos that surrounds us.

There’s deep irony at work here. This is an administration that has been far from normal and has reached new levels of dysfunction after President Trump was diagnosed with COVID-19 last week. Trump is completely unhinged, sabotaging his own health and the health of everyone around him while downplaying and a disease that required his own hospitalization.

What we saw last night was how Pence is just Trump camouflaged in the veneer of calm reasonableness. When Harris blasted the Trump administration’s disastrous coronavirus response, Pence shook his head sadly, feigned injured outrage, and immediately shifted the target from his failures to the courage of the American people. “When you say what the American people have done over these last eight months hasn’t worked, that’s a great disservice to the sacrifices the American people have made,” Pence said. Of course, that is not even close to what Harris was suggesting, nor did he mention that the extreme level of sacrifice was a direct result of his failures. Pence is trafficking in the same demented bullshit as Trump, but he’s saying it in a Very Serious Way.

Of course, Pence didn’t do anything that the rest of the Republican Party isn’t doing. In the week since Trump’s diagnosis, and even during his hospitalization at Walter Reed Medical Center, the GOP has fully embraced the coronavirus, demanding we learn to live with it—indeed, to normalize it. Rep. Matt Gaetz (R-Fla.) who once wore a gas mask on the floor of the US House in order to mock coronavirus restrictions now tweeted a different message: The virus will get us all.

If this virus can get into the Oval, there is no place where it could not possibly infect one of our fellow Americans.

We can protect the vulnerable, but we must live our lives.

No lockdown can save everyone from everything.

The demand to live with a virus that has killed so many and will continue to kill so many is part of the same grand GOP plan to normalize the abnormal that began with Trump’s 2016 campaign. That’s when Pence was routinely deployed to humanize the then-candidate to his Republican senate colleagues like Sens. Ted Cruz (R-Tex.) and Mike Lee (R-Utah) who were wary of Trump—Cruz especially given Trump’s treatment of both his wife and father. (It worked, both Senators are now Trump loyalists.)

Surely, living with the virus means washing your hands, wearing a mask, and avoiding crowded events. Instead, nearly everything Trump and his party has done ensures that even more people will become infected, and some of them will die from COVID.

Just take a look. Even though 34 people contracted the coronavirus at the White House, Trump is still eschewing masks. On Tuesday, Trump’s economic adviser Larry Kudlow said the president had returned to the Oval Office but declined to say whether or not he was wearing a mask. Later, White House officials said he had yet to return to work. The following day, the White House announced that Trump had returned to work on Wednesday, and everyone who came into contact with him was wearing personal protective equipment. Still, no word on Trump’s masking habits.

Pence’s approach to safety protocols match Trump’s. Ahead of the vice presidential debate, his staff objected to the 12 feet distance between candidates and even proposal that plexiglass dividers be placed on stage. Though the objection to the dividers might have been as much a concern about having the omnipresent reminder of Pence’s failure in dealing with the pandemic. Plus, they’re still planning on traveling and holding in-person events. Why miss an opportunity to infect more people, right? Pence is scheduled to go to The Villages, a heavily Republican retirement community in Florida on Saturday.

Campaign announces that Pence is going to The Villages in Florida, the country's largest retirement community, for a "MAGA Event" on October 10.

The community of 50,000 in central Florida has long been a haven for mostly middle-class Republicans who wanted to indulge in day drinking and golf. But recently, it gained notoriety for a video in which a Trump supporter on a golf cart yells “WHITE POWER!” at some protesters. Trump retweeted the video and left it up for hours before removing it.

Since Trump announced his diagnosis, the few people still convinced that Trump is going to pivot to presidential behavior any minute now were convinced that actually getting the virus would finally calm him down—and even help his reelection chances. “If he comes out of this thing a little bit humbled and focused on speeding up vaccines and trying to safely reopen the country,” Sen. Lindsey Graham (R-S.C.) told Politico earlier this week, “then I think he’ll probably be okay.”

“I want the American people to know that from the very first day, President Donald Trump has put the health of Americans first.”

Pence spoke last night as if Trump really was a changed man. “Our nation has gone through a very challenging time this year,” he said, his voice dripping with saccharine. “But I want the American people to know that from the very first day, President Donald Trump has put the health of Americans first.”

In reality, Trump has simply doubled down on his denial—as did his VP.  They both continue to tell the public a vaccine is on the way faster than any scientist says is possible. Trump even asserts that it’s not that bad, and hey maybe he’s immune from a disease he clearly still has! And even though the public health restrictions, which have been prolonged because of government inaction, has caused an unprecedented economic crisis, Trump abruptly pulled the plug on congressional negotiations over a relief bill.

To anyone outside of the Trump bubble—and now, perhaps given all the positive COVID tests in the White House, even for some who are within it—the events of the last week have been infuriating and maddening. Now we can add the experience of watching Pence, supposedly a more normal politician than the reality TV star president, look into the camera and insist that everything was fine. Perhaps, there was no better symbol for the final act of the entire Trump administration’s damaging regime than the beleaguered president climbing up on a balcony and unmasking himself despite the serious risk to himself and others in doing so. The entire Republican Party  is now finally and completely unmasked, disabusing itself from any illusion of common sense, decency, or democracy. Instead, the GOP has become the party of suffering, illness, indifference, and death.

But even as the country finds out in real time just how depraved this administration can get, Trump will continue to send his straight man out to reassure the voters that there is absolutely nothing to see here. You’re doing just fine. “You know there’s not a day gone by that I haven’t thought of every American family that’s lost a loved one,” Pence said on the debate stage last night about the coronavirus victims. “And I want all of you to know that you’ll always be in our hearts and in our prayers.”