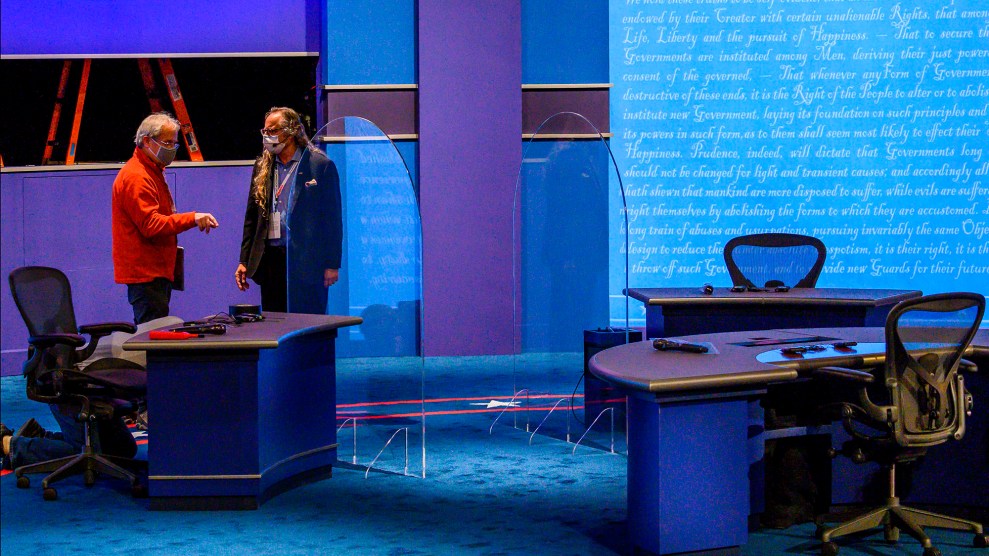 Plexiglass protections between the debaters are seen on the stage of the debate hall ahead of the vice presidential debate at the University of Utah on October 6, 2020 in Salt Lake City, Utah. ERIC BARADAT/AFP via Getty Images

It’s now clear that President Trump rolled up to the first debate against Joe Biden while not only infected with the coronavirus but almost certainly contagious. His family members took off their masks in the debate hall, including the first lady, whose own positive COVID-19 test would soon be announced. The White House has thus far refused to reveal when the president’s last negative test was, as the number of infections in Trump’s orbit has climbed to 23.

Against this backdrop, it should be clear taking team Trump’s word on the timing or presence of any infection in their ranks is unsafe.

Taking team Trump’s word on the timing or presence of any infection in their ranks is unsafe.

And yet, it appears that is exactly what will happen at tonight’s debate between Vice President Mike Pence and Sen. Kamala Harris. The Biden campaign is again deferring to the Commission on Presidential Debates—the event’s host—and the Cleveland Clinic—their medical adviser—to ensure the safety of their nominee. These are the same entities that deferred to Trump on his test results last week, putting Joe Biden on stage for 90 minutes with a man who could have infected him with a deadly disease. The decision by the debate commission to accept the candidates’ word on their test results, rather than administer their own tests or collect evidence of negative results, put a dark cloud over the first debate—yet their testing protocol remains unchanged.

“The presidential debate commission, the Cleveland Clinic, they are responsible for the safety of this debate,” Liz Allen, a Harris spokesperson, told reporters on a call Wednesday. “We are abiding by their determination on safety measures and questions about the adequacy of those safety measures should be addressed to them.” Allen did not respond to a question about whether Pence’s team had reached out to Biden’s camp about testing, leaving an impression that Pence has not been transparent with his opponents about his own testing ahead of the debate.

A second reporter again pressed the campaign on its safety precautions, including whether Harris would campaign alongside Biden in the aftermath of tonight’s debate given the possibility she could be infected while on stage with Pence. The answer was the same. “It’s the Cleveland Clinic’s job to ensure the health and safety precautions tonight at the debate and that the safety standards are being met,” responded senior campaign adviser Symone Sanders. “And we believe in fact that the Cleveland Clinic is going to do their job. They’re professionals.”

But ahead of tonight’s Vice Presidential debate, the Cleveland Clinic put out a statement downplaying their role in the events by stating that they were merely an adviser to the Commission on Presidential Debates. While the press release reiterated that the clinic’s recommended safety precautions have not changed, it directed questions about their implementation to the commission. During the first debate between Biden and Trump, a Cleveland Clinic representative asked the first family members to wear their masks inside the venue. They refused, and the clinic did not enforce its rule, putting everyone there in danger.

Despite his position as head of the White House’s coronavirus task force, Pence has not led by example in demonstrating best practices to stem the virus’ spread. Pence attended the nomination ceremony for Judge Amy Coney Barrett on September 30, where Trump, among many others who are have since tested positive, seems likely to have contracted the virus. Photos of the event show Pence was not wearing a mask. But Pence, after a negative test, chose to keep up a busy campaign schedule, including travel “in contravention of CDC advice to isolate after exposure.” On Tuesday, Pence spokesperson Katie Miller released a statement from Pence’s doctors that said his daily rapid tests—a less sensitive test—have been negative, while offering that he undergoes “intermittent PCR tests”—a more sensitive and conclusive test type. The statement but did not clarify when his last PCR test was. A few hours later, Miller’s husband and White House adviser Stephen Miller tested positive.

Does the debate commission or the Cleveland Clinic know when Pence’s last negative PCR test was? The commission did not immediately respond to a request for comment.