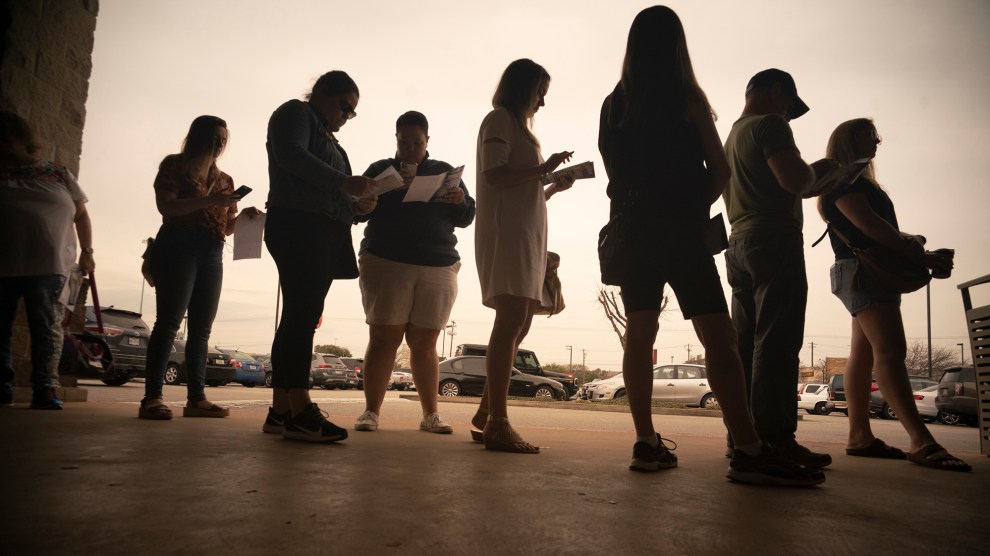 President Trump’s loud refusals to commit to a peaceful transfer of power if he loses the November election have sparked major fears about the continued survival of American democracy. But much more quietly, Trump and his GOP allies have already taken numerous steps to undermine fair elections in an attempt to stay in power. The Trump campaign is furiously litigating in nearly every major swing state (17 states in total) to block expanded access to the ballot during a pandemic, while GOP state lawmakers fight to maintain existing restrictions on voting that have given their party a major advantage in past elections and push new ones. Together, these efforts could disenfranchise hundreds of thousands of voters, mostly in Democratic-leaning demographic groups, and tilt the election toward Trump. Here is a comprehensive list of the ways Trump and his party are making it harder to vote.

Blocking mail-in ballot requests: The Trump campaign has filed numerous lawsuits attempting to block states from sending mail-in ballot request forms to voters. In Iowa, a judge found in favor of the campaign and voided more than 150,000 forms sent to voters in two of the state’s most Democratic counties and a Republican-leaning one, forcing them to request a new ballot in order for it to count.

Blocking universal mail voting: Though states have conducted elections by mailing all registered voters a ballot since the 1990s with few problems, the Trump campaign has sued New Jersey, Nevada, and Montana to block them from doing the same. Trump has denounced the mailing of “unsolicited” ballots to voters on a near-daily basis.

Requiring an excuse to vote by mail: While 44 states will allow all voters to obtain mail ballots during the pandemic, six GOP-controlled states are still requiring a reason other than COVID-19 to vote-by-mail. In Texas, voters under 65 cannot cite fear of contracting COVID as a reason to vote by mail; those that are older can.

Preventing drop boxes: States with a long history of mail voting like Oregon and Colorado, along with relative newcomers like Maryland and New Jersey, allow voters to return their ballots at drop boxes across the state, but the Trump campaign has sued to block them from being set up in swing states such as Pennsylvania. In Ohio, the Republican secretary of state issued a directive limiting drop boxes to one per county (in defiance of a court order), ensuring unequal access for voters living in more-populated counties and forcing some to travel up to 90 minutes to drop off their ballot. In Texas, GOP Gov. Greg Abbott issued a similar directive just weeks before early voting ordering counties to remove already established additional drop boxes, forcing Harris County, which has 5 million people and is larger than Rhode Island, to go from 12 locations to just one.

Throwing out ballots with mismatched signatures: In 2018, more than 100,000 mail ballots were rejected because of a mismatched or missing signatures on return envelopes; in Florida, young voters and voters of color were far more likely to have their ballots thrown out for a mismatched signature than elderly and white voters. Republicans have gone to court in states including Arizona, Ohio, and Pennsylvania to preserve this requirement.

Requiring a witness signature: In eight states, including the swing states of Wisconsin and North Carolina, voters must find a witness to sign their mail ballot, which can be difficult at a time of social distancing; Alabama’s GOP secretary of state went to the Supreme Court to keep a law requiring two witnesses or a notarized affidavit for a mail ballot to count.

Throwing out “naked ballots”: In Pennsylvania, the Trump campaign recently won a court order requiring the state to throw out ballots that are not enclosed in a special secrecy envelope, a move election officials warn could disenfranchise more than 100,000 voters in the state.

Prohibiting the collection of ballots: The Trump campaign has sued states including Maine, Nevada, and Pennsylvania, trying to force a on ban third- party voter engagement groups collecting and returning mail ballots.

Sabotaging the Postal Service: This year, Democrats are more likely to cast mail ballots, and the USPS’s well-publicized major mail delays have led to widespread concern that votes will be rejected because they arrived too late. The delays stem from changes made under Louis DeJoy, a major Republican donor who was made Postmaster General earlier this year, and soon reduced overtime, cut post office hours, and forced trucks to leave before they can be filled with mail.

Strict voter ID laws: Over the last decade, roughly a dozen Republican state legislatures passed laws requiring voters to present certain forms of government-issued photo, which contributed to a drop in Democratic turnout in 2016; According to a study by Wisconsin academics, the state’s voter ID law prevented up to 23,000 voters from casting a ballot in just two mostly Democratic counties—equivalent to Trump’s margin of victory.

Together, these efforts could disenfranchise hundreds of thousands of voters, mostly in Democratic-leaning demographic groups, and tilt the election toward Trump.

Closing polling places: States with a long history of voting discrimination closed more than 1,600 polling places after the Supreme Court gutted the Voting Rights Act in 2013. This has led to longer lines at the polls, especially in Black and Brown communities. In Georgia’s June primary, voters in predominantly white neighborhoods waited an average of six minutes to vote, while voters in predominantly Black neighborhoods waited an average of 51 minutes.

Recruiting poll watchers: The GOP is seeking to recruit 50,000 poll watchers to intimidate and potentially challenge the eligibility of Democratic voters, after the party was freed from a court order that had banned such activity since the 1980s. Trump has threatened to illegally send law enforcement to monitor the polls.

Blocking college students from voting: GOP-controlled states such as Texas have closed polling places on college campuses, while allowing voters to cast a ballot with a gun permit but not a student ID.

Purging the voter rolls: In 2018, the Supreme Court upheld efforts by Ohio’s Republican secretary of state to remove voters who had not voted in a few previous elections, essentially turning voting into a “use it or lose it” right; Georgia’s Republican secretary of state deactivated more than 120,000 registrations earlier this year for the same reason.

Keeping threats to election security under wraps: Trump’s director of National Intelligence announced in August that his office would no longer conduct in-person election security briefings to Congress. Later, after congressional Democrats said the Trump administration was trying to downplay foreign interference in elections, he partially backed down, agreeing to brief only members of the House and Senate intelligence committees.

Encouraging people to vote twice: As part of his continued assault on mail voting, Trump urged his supporters to submit their completed mail ballots and then show up at the polls and test the system by trying to vote again. State officials from around the country had to remind voters that voting twice in the same election is illegal, as others warned that people following the president’s suggestion could create delays that deter legitimate voters.

Lying about voter fraud: The president, with the help of Attorney General Bill Barr,  has repeatedly lied about the prevalence of widespread voter fraud, creating an atmosphere that has made it easier to infringe on voting rights. Of course, the facts are different: The conservative Heritage Foundation lists just 143 criminal convictions for mail ballot fraud over the last 20 years, out of roughly 250 million votes cast by mail. A recent Washington Post analysis of elections in three primarily vote-by-mail states in 2016 and 2018 found 372 possible cases of double voting or voting on behalf of dead people, out of about 14.6 million ballots cast—a rate of roughly 0.0025 percent.

Setting harmful expectations of a quick result: While election officials around the country have warned that a clear vote tallies could take days to emerge, the president has signaled that he may declare victory on election night as part of a strategy to delegitimize millions of legal ballots that will be processed after Election Day.

Dismissing Russian intervention: Trump continues to downplay and publicly dismiss his own intelligence officials’ warnings of ongoing Russian interference in US elections, making it easier for Russia to act as it wishes. Most recently, he incorrectly admonished FBI Director Chris Wray for not telling the public that China is the “far greater” threat. A Department of Homeland Security whistleblower also claimed recently that the Trump administration sought to downplay and manipulate intelligence on Russian election interference.

Doing Russia’s work: Trump’s vocal attacks on the credibility of mail voting and the ability of the US Postal Service to deliver mail ballots have been amplified by the Russian government, Trump’s intelligence analysts said in early September. Even the Republican-led Senate Intelligence Committee warned that Russian attacks on the election are “ongoing” and said continued public undermining of election administration in the United States was making their work easier.

Targeting Black voters with illegal robocalls: In late August, right-wing provocateurs Jack Burkman and Jacob Wohl allegedly targeted voters in urban areas in five states with a robocall informing them that voting by mail would invite increased scrutiny from law enforcement and debt collectors. Each man was charged with four felonies by Michigan Attorney General Dana Nessel on October 1.

Blocking late-arriving ballots: Even against the backdrop of historic levels of voting by mail and the US Postal Service’s well-documented delivery issues, Republicans are waging legal battles in several states to keep ballots that arrive after Election Day from being counted.

Preparing to to nullify the results: Down in the polls, Trump and Republican allies are allegedly preparing to “circumvent the results of the vote count,” according to Barton Gellman’s recent reporting in the Atlantic, using litigation and the pretext of problems with mail ballots as a pretext for Republican-led state legislatures to possibly appoint their own electors and nullify the will of the voters.