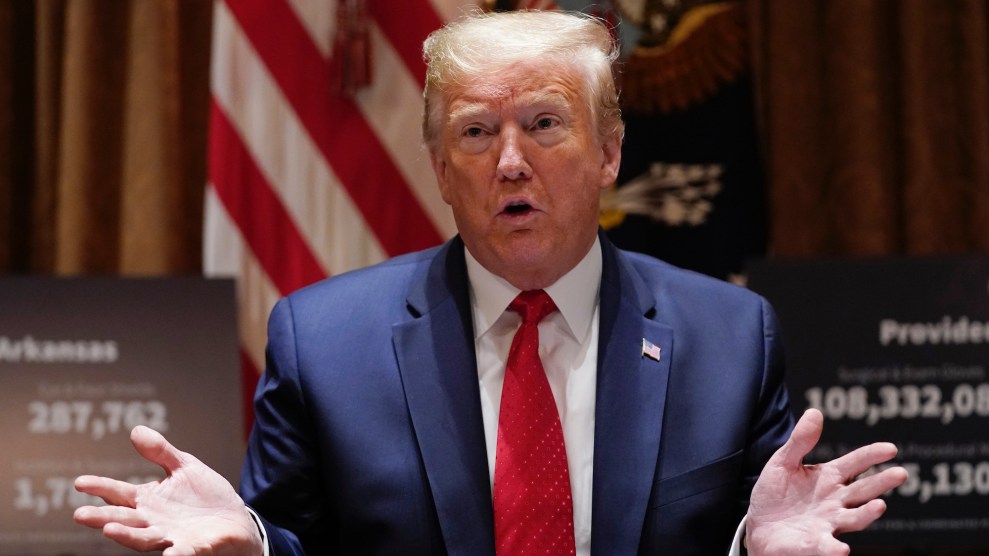 President Donald Trump speaks during a meeting with Arkansas Gov. Asa Hutchinson and Kansas Gov. Laura Kelly in the Cabinet Room of the White House, Wednesday, May 20, 2020, in Washington. AP Photo/Evan Vucci

This may come as a surprise to those closely tracking the ethical horror show that is the Trump presidency, but the Trump Organization takes conflicts of interest and nepotism very seriously. At least that’s what it says in an employee handbook for staffers at its DC hotel, which was obtained by Mother Jones. If the handbook’s ethics policies were applied to the hotel’s owner, Donald Trump, he would likely be out of a job.

The hotel’s policy prohibiting “actual or potential” conflicts isn’t all that unusual save for the fact that Trump’s DC hotel is itself a gleaming monument to conflicts of interest where special and foreign interests can (and do!) channel money straight into the president’s pockets via hotel stays, restaurant and bar sales, and ballroom rentals. The hotel—which this week is serving as an unofficial Republican National Convention venue—also operates out of a building leased from the federal government, making Trump both the hotel’s owner and its landlord. The absurdity of this arrangement was brought into relief this spring when the Trump Organization, battered by the pandemic, asked the Trump administration for a break on its lease payments.

Trump ensured an unprecedented mingling of his personal and political interests when he refused to relinquish ownership and control of his business empire after the 2016 election.

“The law’s totally on my side, meaning, the president can’t have a conflict of interest,” he told the New York Times at the time. This is, at best, a mangling of the facts. The president and vice president are exempted from conflict-of-interest rules that apply to federal government employees, but that doesn’t mean the conflicts don’t exist or that they aren’t problematic. Trump went on to tell the Times that he knew critics would fixate on his then–brand new DC hotel, located blocks from the White House:

They’ll say I have a conflict because we just opened a beautiful hotel on Pennsylvania Avenue, so every time somebody stays at that hotel, if they stay because I’m president, I guess you could say it’s a conflict of interest. It’s a conflict of interest, but again, I’m not going to have anything to do with the hotel, and they may very well. I mean it could be that occupancy at that hotel will be because, psychologically, occupancy at that hotel will be probably a more valuable asset now than it was before, O.K.? The brand is certainly a hotter brand than it was before. I can’t help that, but I don’t care.

Indeed the hotel fast became a hot spot for lobbyists, foreign dignitaries, and all manner of Trump cronies and hangers-on seeking to curry favor. Whether Trump acknowledges it, many guests openly say they are proud to patronize a business putting money in his pockets.

Ironically, unseemly business dealings by Trump employees are forbidden at the hotel, according to its employee handbook. A section titled “Avoiding Conflict of Interest” instructs employees to steer clear of anything that might create even the appearance of a conflict, noting: “Associates have an obligation to conduct business within guidelines that prohibit actual or potential conflicts of interest.” And the policy goes on to state:

An actual or potential conflict of interest occurs when an associate is in a position to influence a decision that may result in a personal gain for that associate or for a relative as a result of the Hotel’s business dealings. For the purposes of this policy, a relative is any person who is related by blood or marriage, or whose relationship with the associate is similar to that of persons who are related by blood or marriage.

While Trump has said that he’s turned control of the hotel’s day-to-day operations over to his adult sons, Eric and Donald Jr., he remains the majority owner of the hotel and is able to withdraw money from the business when he wants, which would seem to clash with the handbook’s guidelines for the hotel staff. On that note, another arguably relevant section is the ban on nepotism: “The Hotel maintains a policy of not hiring the relatives or family members of current associates” since these relationships “can create an actual, potential, or perceived conflict of interest in the employment setting.”

Trump, of course, disregarded such concerns, when he installed his daughter, Ivanka, and son-in-law, Jared Kushner, in senior White House roles.

The Trump hotel’s ethics rules are not the only area where its owner isn’t exactly leading by example. The handbook forbids “immoral or indecent behavior that has the potential to publicly embarrass the Hotel” and bans “profane, discourteous, abusive, or rude language or action.” So much for that.