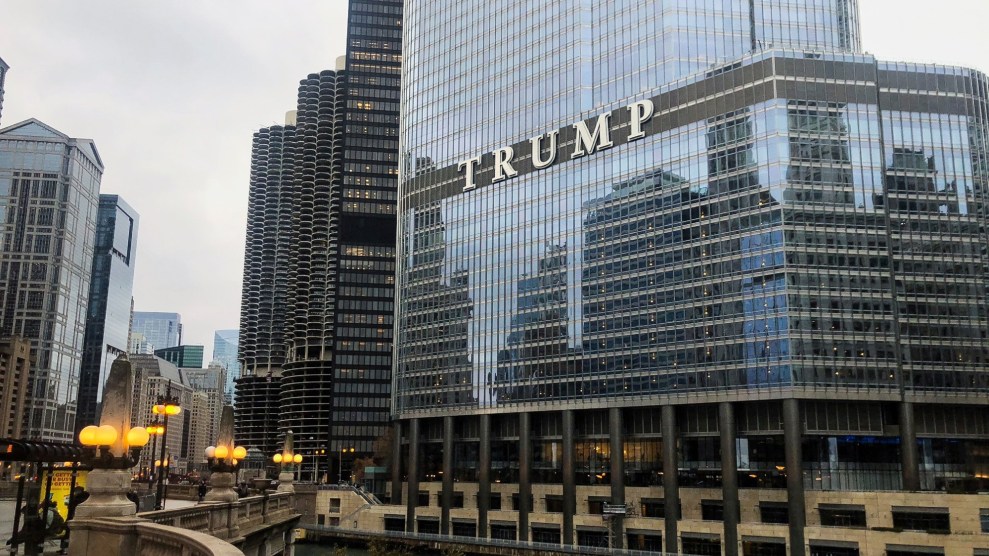 The Trump International Hotel and Tower in Chicago may qualify for a forgivable loan through the coronavirus bailout package.Samuel Rigelhaupt/Sipa via AP Images

This story was originally published by ProPublica, a Pulitzer Prize-winning investigative newsroom. Sign up for The Big Story newsletter to receive stories like this one in your inbox.

Last month’s $2 trillion bailout bill barred President Donald Trump, his family or other officials from benefiting from one of the law’s giant loan programs. But as reporters noticed, there was no such language included for other elements of the bailout. Some provisions of the bailout are particularly beneficial to businesses like Trump’s.

There is no evidence that any provisions in the bailout were written specifically to benefit the president. It’s also not known whether the Trumps will seek such aid. We asked the Trump Organization and White House about whether the company plans to apply for bailout loans. They did not respond.

The president has said it’s not clear to him even how his company could benefit.

“I mean, I just don’t know what the government assistance would be for what I have,” he said in a recent White House briefing.

We had the same question: What are the ways the Trump Organization could benefit from the bailout?

So we’ve dug into it.

First, at least four of Trump’s hotels each seem to qualify for a separate, forgivable loan…

The bailout has a huge loan program to help many businesses with payroll and other costs. While it’s only open to smaller companies, there’s a carveout for hotels: As the New York Times reported, the law says individual hotels can each qualify for separate loans, even if they’re all owned by a single company, so long as the hotel itself has 500 or fewer employees.

The provision was pushed by a hotel industry group, which argued it was needed for 33,000 hotels to qualify for the bailout. The group, of which some Trump hotels are members, organized a meeting between hotel CEOs and Vice President Mike Pence in mid-March to discuss the industry’s struggles and ask for help.

Each small business—and each hotel—can qualify for up to $10 million in loans, depending on payroll costs. The loans can then be forgiven if the money is used to cover payrolls and other ongoing expenses.

Four Trump hotels appear to qualify: two that Trump owns and two that his company manages.

Representatives at the four hotels did not respond to our questions about staff size or whether they plan to apply for loans through the small business loan program. The four hotels are:

The general manager of the hotel, which the president owns, said in a 2018 interview about 450 people work there. (The interview was first flagged by the 1100 Pennsylvania newsletter.) The hotel’s company page on LinkedIn also lists the staff size as between 201 and 500.

Companies getting the loans must make a “good faith certification” that they need the funds to continue operating. Occupancy rates at Trump’s D.C. hotel dropped to as low as 5 percent at the end of March. Trump borrowed $170 million from Deutsche Bank to finance the hotel’s renovation, one of several loans with the bank he personally guaranteed.

Trump once boasted that his Charlottesville winery was the largest on the East Coast. It’s not. The property also includes a 10-room hotel that the general manager describes as having under 100 employees.

The Trump Organization manages this hotel. Industry groups are still seeking clarification on who the eligible borrower is when a hotel is owned and managed by separate companies, a common business structure in the hotel industry. We talked to industry experts who said their understanding is hotel management companies can apply for the small business loans if they’re the ones who employ the staff.

Trump’s New York hotel reports a staff size between 201 and 500 on its LinkedIn company page.

The Trump International Hotel and Tower—Chicago

The Chicago tower is another Trump-branded hotel managed by the Trump Organization. It has a staff size of 450, according to the LinkedIn profile of the hotel’s managing director.

No, Mar-a-Lago does not appear to qualify for bailout money…

As a private club, and not a hotel, Mar-a-Lago could only get bailout money if the company that owns it—the Trump Organization—had fewer than 500 employees across all affiliated companies. Trump’s company has more employees than that. For the same reason, Trump’s golf courses don’t appear to qualify. Nor do a number of larger hotels his company operates, including the Trump National Doral and the Trump International Hotel Las Vegas.

Like others in the hotel industry, Trump’s business has been pummeled by the pandemic. And as the president has noted: “Everybody knew I had hotels when I got elected. They knew I was a successful person when I got elected, so it’s one of those things.”

But Jennifer Ahearn, policy director at the watchdog group Citizens for Responsibility and Ethics in Washington, points out that while every qualifying business has the opportunity to apply for the loans, not every business is owned by the president of the United States.

“If you have a situation where more than one eligible company is applying and you have to decide between and among them, that’s one thing that is certainly a concerning question,” she said in an interview. “Is the president’s business going to be receiving special treatment?”

Another question: What does oversight look like? The issue “is not just, ‘Will they receive the loans?’” Ahearn said, “but if they were to not comply with the terms of a loan or a grant, what would happen in that circumstance, and who would be making the decision about what to do about that?”

On Tuesday, the president sacked and replaced the federal watchdog who was supposed to oversee the bailout.

The government agency running the program—the Small Business Administration—has not yet laid out what kind of information it will collect about businesses that receive loans and loan forgiveness, and whether that information will be publicly available.

The Small Business Administration did not respond to our questions about how oversight over the loan program will work.

Trump does have a record of availing himself of federal help meant for small businesses. After 9/11, his company applied for a program meant to help small businesses in lower Manhattan recover after the attacks.

The Trump Organization, which by then owned luxury real estate around the country, applied for the grant through a limited liability company that owned Trump’s Wall Street highrise. The company received a $150,000 grant.

Another aspect of the bailout encourages banks to help borrowers avoid default.

Banks—say, Deutsche Bank—usually have to take special care with loans that are turning sour. They are required to keep more money on hand, for example. The bailout temporarily lifts those requirements for many loans.

Banks are supposed to collect data on the loans they modify under this provision, but it’s unclear exactly what they will be required to report publicly.

The Times reported that the Trump Organization last month reached out to Deutsche Bank, one of its biggest lenders, to talk about postponing payments on some of its loans. The bank required that Trump personally guarantee some of those loans due to his problematic credit record. The Times noted that bank “executives have been fretting about what would happen if he were to default.”

Trump has done that before with Deutsche. When the housing market crashed in 2008, Trump defaulted on a $640 million loan for his Chicago tower. He sued the bank, citing force majeure—an act of god—and claiming $3 billion in damages caused by its role in the financial crisis. The bank counter-sued, and the two parties reached a settlement.

Deutsche Bank declined to comment about its plans for how it will handle troubled loans.

Then there are tax breaks…

One of the biggest tax benefits appears to be a provision highlighted by the Times that makes it easier for owners of hotels, restaurants and supermarkets to lower their tax bills. Since the president’s company is privately owned, we may never never know if it has taken advantage of the new tax benefits.