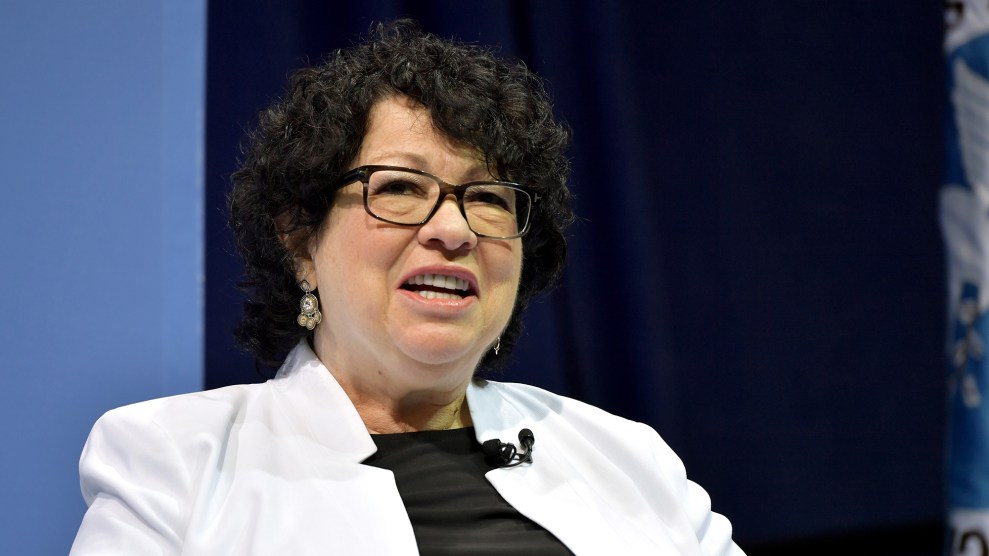 Chief Justice John Roberts, a conservative, joined his liberal colleagues on Thursday to preserve a program that allows undocumented immigrants brought to the United States as children to remain in the country, handing a significant victory to hundreds of thousands of migrants. But Roberts’ majority opinion didn’t get everything right, according to liberal justice Sonia Sotomayor. In her concurrence, she laid out where she believes Roberts went too easy on Donald Trump, suggesting that the president’s history of vicious and racist comments about immigrants provided vital legal context necessary to judge his attempt to end the Deferred Action for Childhood Arrivals program.

Her writing has already been hailed. “I thought I could not love Justice Sotomayor any more than I did already,” tweeted former Justice Department civil rights official Sam Bagenstos. “Then I read her DACA concurrence.”

Roberts’ approach to the case was technical. He ruled that the Department of Homeland Security, which rescinded the policy, had failed to adhere to the required steps that federal agencies must go through before making or rolling back rules. Sotomayor agreed the government had goofed, but chided the chief justice for taking an approach that ignored ample evidence of illegal bias from the president targeting Mexican Americans and migrants. Roberts and a plurality of the court, she argues, ignores this track record, and thus “prematurely disposes of respondents’ equal protection claims by overlooking the strength of their complaints.”

First, Sotomayor writes, Roberts was wrong to discount Trump’s myriad racist comments about Mexican immigrants as “people who have lots of problems,” “the bad ones,” “criminals, drug dealers, [and] rapists,” and his comparison of undocumented immigrants to “animals.” As she wrote,

Taken together, “the words of the President” help to “create the strong perception” that the rescission decision was “contaminated by impermissible discriminatory animus.”

Relatedly, Sotomayor criticizes Roberts for minimizing the disproportionate impact that ending DACA would have on Latinos given the president’s expressed views:

I would not so readily dismiss the allegation that an executive decision disproportionately harms the same racial group that the President branded as less desirable mere months earlier.

As late as June 2017, DHS insisted it remained committed to DACA… But a mere three months later, DHS terminated DACA without, as the plurality acknowledges, considering important aspects of the termination. The abrupt change in position plausibly suggests that something other than questions about the legality of DACA motivated the rescission decision. Accordingly, it raises the possibility of a “significant mismatch between the decision…made and the rationale…provided.”

While Roberts’s ruling protects DACA recipients for now, the decision suggests a better-designed rollback by the Department of Homeland Security would almost certainly win support from a court majority—and a dissent from Sotomayor, who says Trump’s demonstrated racism targeting people of Mexican origin cannot be separated from his actions harming that community.