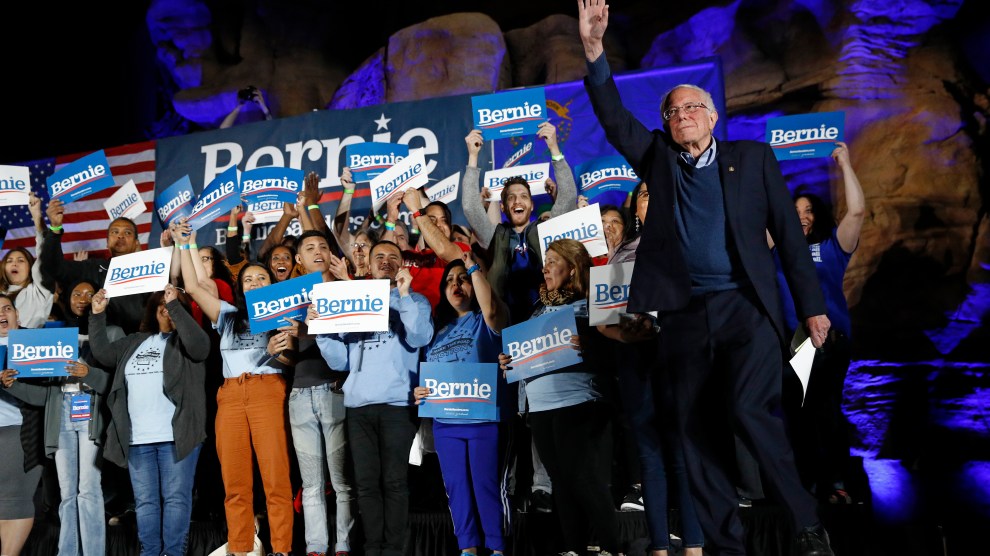 Andrew Yang may have had more fun running for president than anyone else in the Democratic field, but if that really was what the presidential race was all about you’d have to figure that Tom Steyer would at least get delegates. Nevada has not been a great state for the billionaire businessman, as far as “getting elected president” goes. After poor showings in Iowa and New Hampshire, he failed to qualify for the Wednesday debate in Las Vegas, and despite showering the state in ads—on the Latin Mix radio station, you’ll only hear Bernie more—he’s not likely to wow anyone when the caucus results come in this afternoon.

But at least he’s losing with a lot of style. When I showed up on Tuesday during the final hours of early voting, there he was outside the headquarters of the Culinary Union, next to a taco truck and mariachi band, both of which he paid for and was offering up to voters for their enjoyment. And on Friday, as candidates all made one final pitch, Steyer was at an events space just south of downtown, where…TLC…? …was performing… No Scrubs?

Happy birthday to me, here’s “No Scrubs” pic.twitter.com/mRWBLLu0Ds

Steyer best captured the decadent spirit of the city, but if you wanted a glimpse of how today’s caucuses might play out, you had to go to the suburbs a little bit further west, where Bernie Sanders and Joe Biden held dueling events about a mile apart.

An hour and a half before Sanders’ rally was set to kick off, at an outdoor amphitheater on the grounds of the state museum, the line to get in snaked through two parking lots. (The campaign put out an are-they-pulling-my-leg-here official crowd estimate of 2,020.) That’s in keeping with Sanders’ key to victory here—an overwhelming show of force. For the third consecutive contest, he’s argued that his campaign wants record-breaking turnout. And with a massive field organization turning out the vote, there’s at least some indication that they’re on track; almost as many Nevadans voted early this year as voted on caucus day in 2016 (when there was no early voting) and Sanders’ march to the polls last Saturday with a mass of supporters in heavily Latino East Las Vegas launched a frantic week of the dreaded “expectations-setting” from rival campaigns. In other words: many of the votes he’s counting on are already in the bank.

As with his rock-concert kickoff in New Hampshire, the election-eve rally was a projection of confidence and inevitability. As his opponents fight amongst themselves (and increasingly, with him) Sanders often acts as if, save for the useful billionaire foil Michael Bloomberg, he is already running against Trump.

Meanwhile, about a mile down the road, Biden’s last event was a far more subdued affair. A few hundred people, perhaps, fit in a small gymnasium at a middle school and efforts to start supportive chants fizzled out fast. Biden, who led virtually every poll of the state into February, represents on paper the best chance to slow down the Sanders coronation here. His opening speakers—two of the state’s three Democratic members of Congress, Steven Horsford and Dina Titus—and backdrop (members of the International Brotherhood of Electrical Workers, in matching navy t-shirts) spoke to the institutional support he enjoys. Horsford, like another dignitary in the room, state Sen. Yvanna Cancela, was a former official at the powerful Culinary Union, which did not endorse a candidate but engaged in a weeks-long feud with Sanders over both his health-care plan and the behavior of his supporters.

Biden supporters have chalked up some of his shortcomings in the first two states to the relative homogeneity of Iowa and New Hampshire. Horsford expressed his relief that “a state that reflects the diversity of our country and of our party finally gets our say tomorrow.” Or as a precinct captain in the crowd put it to me: “White Hampshire” was behind them. Titus, for her part, did her best to dispel speculation that Biden might settle for second: “We’re gonna take him over the top tomorrow,” she predicted.

But Biden still sounds like he’s playing catch-up, if not in Nevada, then in many of the states to come. He used his remarks to get in a few more digs at Sanders. “[A]ll those health care plans you gave up wages for and negotiated for” would go away, if Sanders won, he said. Oh, and by the way, single-payer health care “got passed in Vermont, no one remembers this …and it lasted about 12 seconds!” Sanders and Bloomberg were finally getting the kind of critical examination he faced for a year. “They’re not bad folks,” he said. “They’re just not Democrats.”

Biden stuck around afterwards shaking hands and posing for photos until only a few supporters remained, and Cher started playing over the loudspeaker. “I Believe He Would Be Honest,Smart,”CIVIL”PRES.Who Doesn’t Have 2 Learn On The Job,” she tweeted on Monday. He may not have done enough, but he had, at least, won over one undecided voter this week.