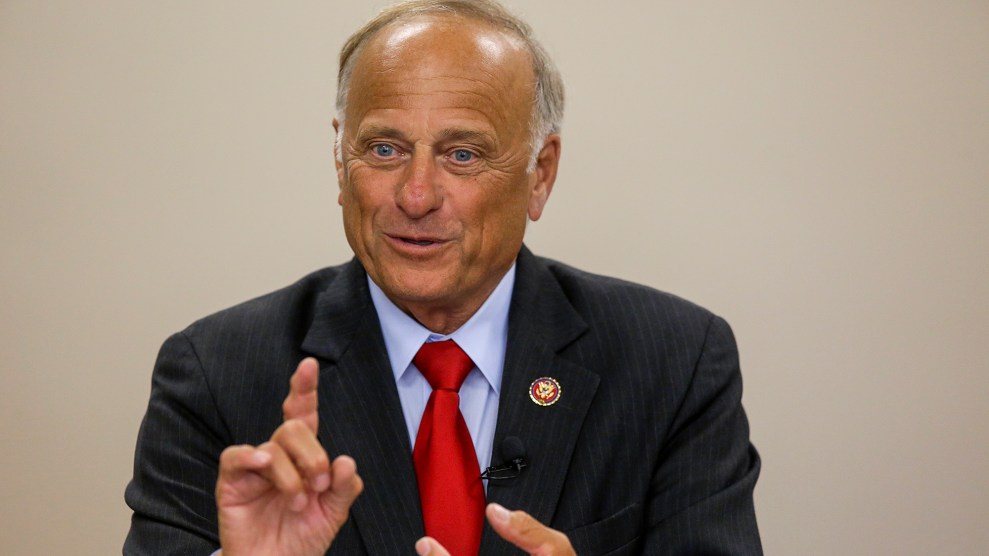 Rep. Steve King (R-Iowa) on Thursday probably thought he was posting pictures of the alleged whistleblower in Trump’s Ukraine scandal, when he instead posted photos of Alex Soros, the son of a liberal financier and billionaire George Soros.

“Adam Schiff said, ‘I do not know the identity of the whistleblower.’ …here are four strong clues,” King tweeted on Thursday morning, before deleting it later in the day after reporters noticed the message and pointed out his mistake.

Conservatives have frequently tried to pin the elder Soros, a prominent Jewish investor and philanthropist, as a boogeyman responsible for a number of nefarious anti-Republican schemes. Although Soros has not to date played a major role in conspiracy theories espoused about the Ukraine whistleblower, that may be changing. Last night on Fox News, Joseph DiGenova, a conservative lawyer and an associate of Rudy Giuliani, claimed that Soros was directing US diplomats and FBI agents in a quest to control Ukraine, and that he’d been aided by one of the State Department officials who testified at Wednesday’s impeachment inquiry.

While King has levied attacks at George Soros in the past, it’s not likely his tweet was an attempt to rope him or his son into the Ukraine scandal—instead it seems that King fell for a right-wing hoax website’s misinformation.

It’s unclear exactly how King found the image, but the same photo collage that King posted has been circulated by two sketchy, obscure right-wing sites along with articles providing an alleged name of the whistleblower. The stories, which were posted on November 8 and 11, also appeared to conflate the alleged whistleblower with Soros.

Neither story was widely shared, but both picked up a small amount of traction in niche, right-wing internet circles on Facebook and Twitter. Some obscure right-wing bloggers and social media accounts also posted the image, also misidentifying Soros as the alleged whistleblower. One of the stories was shared by the right-wing conspiracy theorist Jerome Corsi on November 11, which could have helped it make its way to King. (Neither Corsi nor a representative for King returned Mother Jones requests for comment.)

The websites which distributed the composite image of Soros were designed to appear like local news outlets—a common tactic among people seeking to spread disinformation and misinformation. The strategy was used by Russian trolls to influence American politics on social media in 2016, and has been replicated by others, including different countries and private, for-profit hyperpartisan news ad farms.

The sites show a mix of local news from the areas where they claim to be based, interspersing stories with an aggressively pro-conservative bend.

A more extensive version of the collage of Alex Soros alongside Democratic politicians appeared to have started circulating in 2016, after Breitbart posted it as the lead image on a profile of the younger Soros. It was then posted on right-wing blogs echoing the story, before reappearing on the internet at various points between 2016 and Thursday, when King gave it a second wind.

King’s failed attempt to put a face on the whistleblower comes as GOP officials have worked to publicly confirm the identity of the whistleblower who first called attention to Trump’s request that Ukraine undertake investigations damaging to his political opponents.