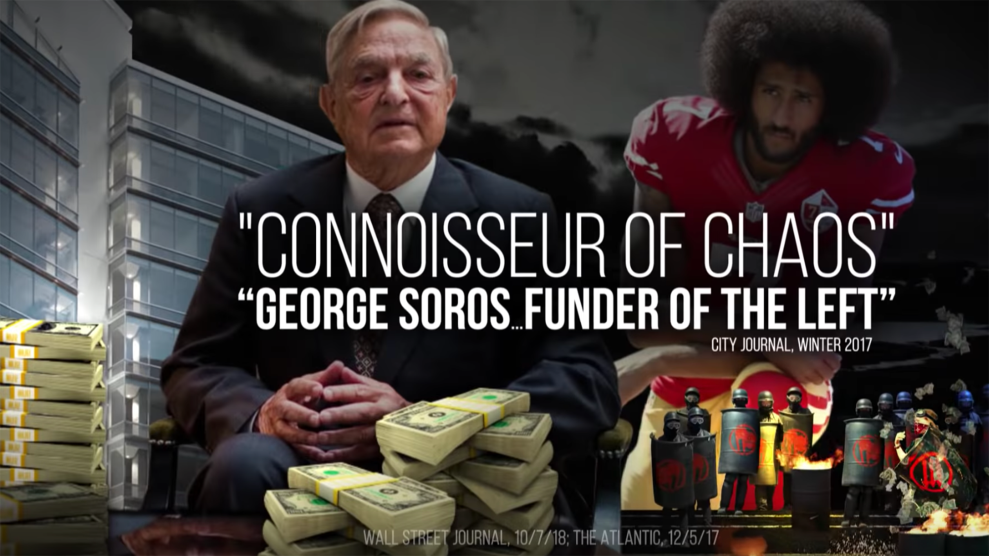 A day after the deadly shooting at a synagogue in Pittsburgh, the head of the Republican Congressional Campaign Committee refused to disavow a campaign ad linking a Democratic candidate to George Soros, who was sent a pipe bomb last week and has been the subject of attacks that many regard as anti-Semitic.

The ad, released October 18, targets Dan Feehan, the Democrat running against Republican Jim Hagedorn to represent Minnesota’s 1st Congressional District. It features a montage with Colin Kaepernick kneeling and warnings of “left-wing mobs paid to riot in the street,” followed by an image of Soros with stacks of bills, repeating a classic anti-Semitic trope. “Billionaire George Soros bankrolls the resistance,” the ad says.

Despite the pipe bomb and the fact the accused Pittsburgh shooter said he wanted to “kill Jews,” the head of the NRCC, Rep. Steve Stivers (R-Ohio), defended the ad on NBC’s Meet the Press. “Our independent expenditure arm is independent,” Stivers said. “But that ad is factual. And it also has nothing to do with calling for violence. That ad is a factual ad.”

.@chucktodd asks @RepSteveStivers about the NRCC's ads targeting Soros: "Why do you target George Soros?"
Stivers: "Our independent expenditure arm is independent. But that ad is factual. And it also has nothing to do with calling for violence. That ad is a factual ad" #MTP

In fact, the ad is funded by an arm of the NRCC. On the same show, Jonathan Greenblatt, director of the Anti-Defamation League, said, “The attacks on George Soros are appalling, and the continued invocation of classic anti-Semitic themes…is just repulsive.”

Greenblatt attributed the 57 percent surge in anti-Semitic incidents last year—“the single largest spike we have ever seen”—to the ways in which anti-Semitic language had been embraced by some elements of the Republican Party. “We are seeing an environment where anti-Semitism has moved from the margins into the mainstream, where political candidates and people in public life now literally repeat the rhetoric of white supremacists,” he said. “It’s normal and permissible to talk about Jewish conspiracies manipulating events, or Jewish financiers somehow controlling activities, and that is awful.”

One Republican member of Congress, Rep. Matt Gaetz of Florida, recently claimed without evidence that Soros had funded the migrant “caravan” from Central America. The accused Pittsburgh shooter, Robert Bowers, was obsessed with the idea that Jewish organizations were bringing migrants into the United States.

Erick Erickson, who has spread the conspiracy theory that the caravan was sent to influence US elections, was also on Meet the Press today. “Sometimes people get mad at you, thinking you help traffic these conspiracies,” Chuck Todd said.

“If you’re a conservative who’s at war with the truth, you’re not really being conservative,” Erickson replied.

WATCH: Erick Erickson speaks to conservatives who spread conspiracy theories, now that we have facts about the bomb suspect. #MTP@EWErickson: “If you’re a conservative who’s at war with the truth, you’re not really a conservative.” pic.twitter.com/ckmGj0lU5F

But the conspiracies about Soros have been getting plenty of airtime on right-wing media. On an October 25 episode of Fox Business Channel’s Lou Dobbs Tonight, guest Chris Farrell of Judicial Watch, a conservative group, claimed the caravan had been funded and directed by “the Soros-occupied State Department.” There is no evidence the caravan has been timed to coincide with the midterm elections, or that Soros has funded the migrants. (In a statement, the network later said it condemned the remarks and wouldn’t air the episode again.)

Right-wing media is not the only place attacks on Soros have flourished. My colleague Aaron Wiener reported Friday:

[A] US government-funded broadcasting network produced a segment that attacked the liberal donor—a common target of conservative conspiracy theories—as a “multimillionaire Jew” and “the architect of the financial collapse of 2008.” The video segment, which aired in May, was produced by Radio Televisión Martí, a Spanish-language network that broadcasts news and propaganda to Cuba to promote US foreign policy interests. The Miami-based network is overseen by the Office of Cuba Broadcasting, which is part of the United States Agency for Global Media, an independent US government agency whose stated mission is “to inform, engage, and connect people around the world in support of freedom and democracy.”