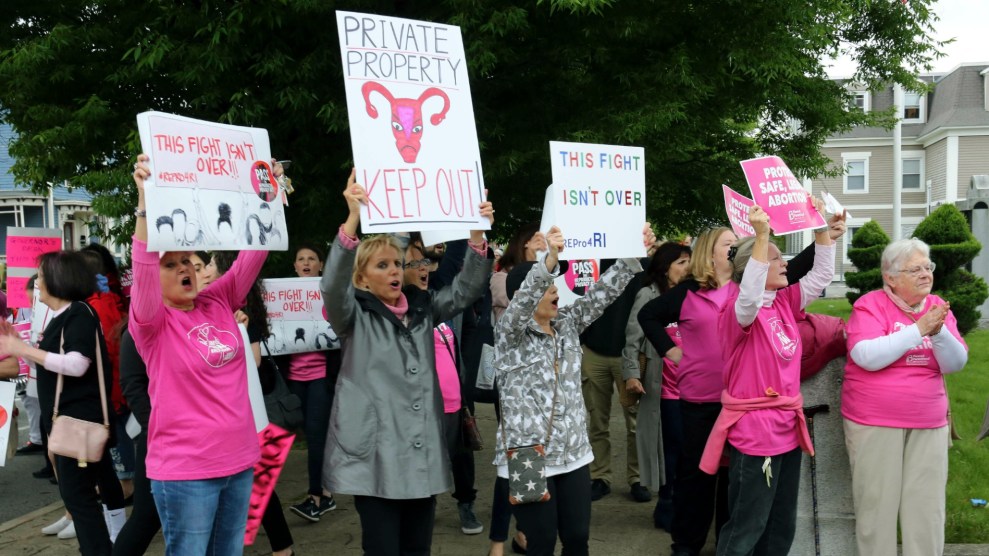 As red states across the country have moved to limit access to reproductive health care, the Democratic Party in one of the bluest states in the country is coming apart over abortion rights.

Earlier this month, the Rhode Island Democratic State Committee voted to strip the Rhode Island Democratic Party Women’s Caucus of key privileges, apparently as retribution for the caucus’ push to enshrine the right to an abortion in state law. The move was the culmination of a bitter fight between the anti-abortion members of the party’s leadership and legislators seeking to expand reproductive rights.

The Women’s Caucus can no longer endorse candidates, spend money, or put out public statements without the committee’s approval. According to Liz Gledhill, the chair of the caucus, the state committee’s decision is payback for a series of intra-party fights over reproductive rights, sexual harassment, and Democratic Party values.

In June, Rhode Island passed the Reproductive Privacy Act, which affirmatively legalizes abortion in the state so that if the Supreme Court were to overturn Roe v. Wade, Rhode Island would maintain the right to an abortion. Although Democrats control both legislative chambers, State Sen. Gayle Goldin says passing the bill was an uphill battle due to fierce resistance from anti-abortion Democrats.

Rhode Island, which is the most Catholic state in the country, has long been home to anti-abortion Democrats. In the 2016 election, Rhode Island Right to Life, an anti-abortion advocacy group, endorsed 48 Democrats running for office in the state legislature, including the two top  Democrats in the state House and the top three in the Senate. Democratic House Speaker Nicholas Mattiello called efforts to codify Roe v. Wade “divisive” and “irrelevant” in a public radio interview in 2018 and voted against the Reproductive Privacy Act. The legislation passed by a 21-17 vote in the state Senate and 45-29 in the House.

Following the interview, there were immediate calls for his resignation. However, Mattiello refused to call for DeLorenzo’s ousting, igniting tensions on both sides. DeLorenzo ultimately left his post after the Women’s Caucus organized against him and the state Senate president called for him to step down.

The party also struggled when it came to picking candidates to endorse. In 2018, the state party endorsed former Republican Michael Earnheart, who supported Donald Trump in 2016, for a state house race over the incumbent, Rep. Moira Walsh. Gledhill says the endorsement caused a major fissure between the Women’s Caucus and the state party, to the point where several members called for the resignation of party chairman Joseph McNamara. The party later pulled its endorsement of Earnheart.

The choice to handicap the Women’s Caucus came as a shock to Gledhill. But she says her caucus didn’t take the decision lying down. After a caucus meeting, it chose to form a new organization called the Rhode Island Democratic Women’s Caucus, which can create its own bylaws and organize separately from the larger state party. The Women’s Caucus has also maintained an organization within the state Democratic Party. Gledhill says she has remained open to the possibility of working with the state party to come back together, but only if they can “have a seat at the table.” Gledhill isn’t holding out much hope of that happening anytime soon.

“I think they underestimated us,” says Gledhill. Since leaving the state party two weeks ago, she says, her caucus has raised thousands of dollars. Gledhill says the support has been overwhelming and that progressives in the state now feel they have an organization worth supporting.

“The difference between our party and the leadership in our caucus is that we don’t hesitate to say when something’s wrong, and we don’t care about losing a relationship with somebody that is promoting hatred,” says Gledhill. “It’s not tolerated, it’s not appropriate, and it’s not a part of our Democratic ideals.”