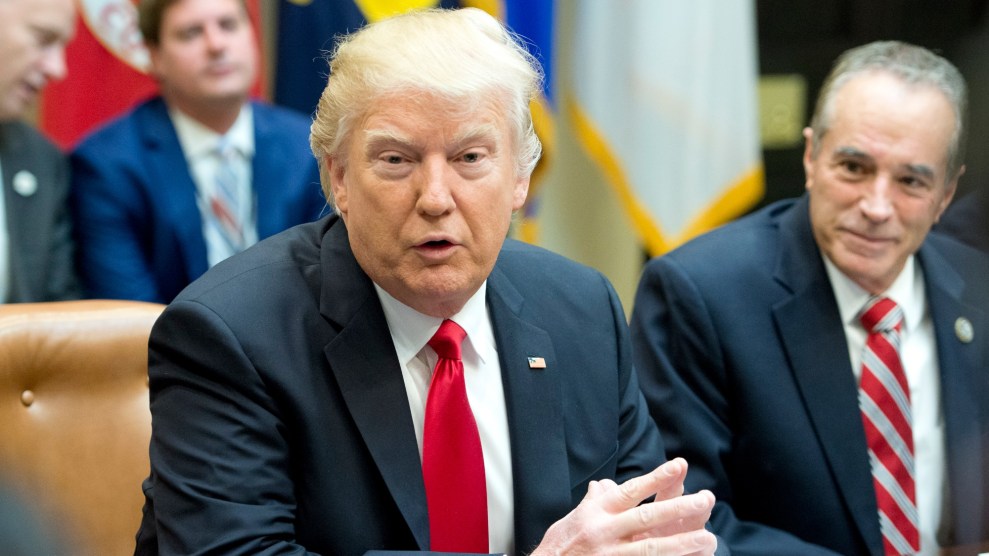 Hours after reports emerged that Rep. Chris Collins (R-N.Y.) was expected to plead guilty to insider trading charges, the Daily Beast broke the news that Collins had resigned his seat on Monday. Several other outlets, including the Washington Post, confirmed that the four-term congressman had stepped down.

Collins’ departure from the House marks an inglorious end to his congressional tenure after three-and-a-half-terms representing a deep-red district in upstate New York. As one of the safest incumbents in the country, Collins drew notoriety in 2016 when he became one of the first sitting lawmakers—along with Rep. Duncan Hunter (R-Calif.), another congressman facing a federal indictment—to endorse Donald Trump’s presidential campaign. The early vote of confidence in the eventual Republican nominee won him loyalty and appreciation from Trump, who tweeted, “Chris, thank you so much for your wonderful endorsement. I will not let you down!”

Within two years, Collins was fighting for his political life. In August 2018, he was indicted as part of an insider trading scheme involving an Australian drug company. As Mother Jones reported at the time:

Collins had used information gleaned from his position as a board member at a pharmaceutical company to alert his son and close associates of a failed test for a new company drug before news of it became public. Federal investigators said this information prompted Collins’ family and friends to sell their shares in the company and save over $768,000 in losses.

He originally pleaded not guilty to charges of securities fraud and lying to the FBI, but the indictment all but halted donations to his campaign, halved his congressional staff, and made the race for New York’s deep-red 27th district suddenly competitive. (The Republican primary had already taken place, and New York’s arcane election rules made it close to impossible for the party to remove Collins.)

Collins defeated Nate McMurray, the little-known Democrat who ran against him, by less than 1,500 votes, ensuring he would return to the House as a pariah. Republican leaders stripped him of committee assignments and a coterie of primary opponents gathered to dethrone him. Even McMurray launched a second challenge last month, trashing Collins’ “many ethical and legal failures” in his announcement.

Within hours of the news that Collins had resigned, McMurray’s campaign released a statement reflecting the new political reality. “The real victims of Collins’ crimes are the people of his district that he repeatedly lied to about his guilt,” McMurray said. “Collins and Republican party insiders robbed his constituents of the representation they need on important issues like the rising cost of healthcare, the opioid epidemic, and the fight for good paying jobs.”

When Collins was arrested by the FBI last August, he called the charges against him “meritless” and vowed to “mount a vigorous defense in court to clear my name.” Thirteen months later, Collins “is expected to plead guilty to felony charges of insider trading,” the Daily Beast reported. On Monday, Collins notified Speaker Nancy Pelosi (D-Calif.) of his resignation “effective immediately.”