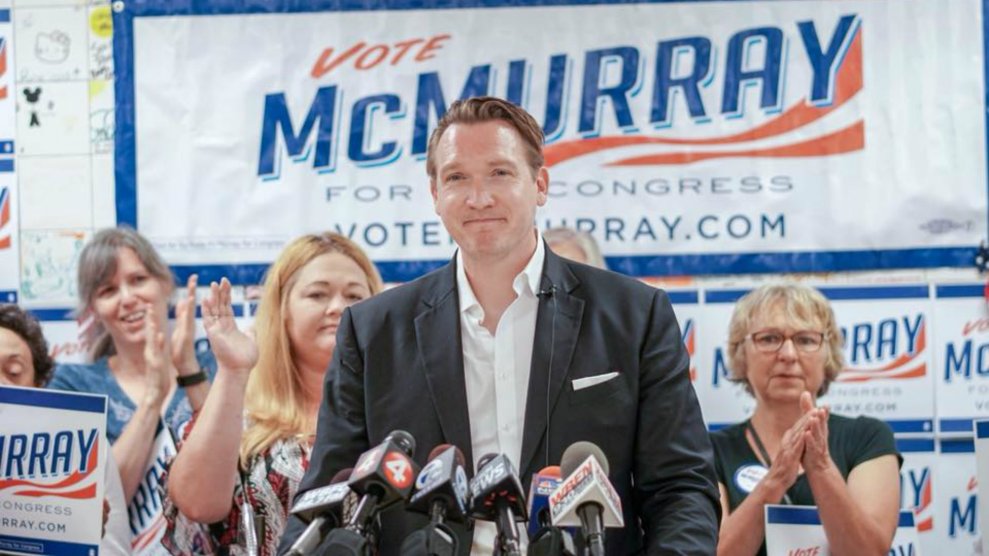 When Nate McMurray, the long-shot Democratic candidate in New York’s ruby-red 27th District, went out for a jog on an 88-degree Wednesday morning, he had just four campaign volunteers and a hair’s breadth of a chance to unseat Rep. Chris Collins (R-NY).

Collins, the first sitting congressman to endorse Donald Trump, had just been indicted on insider trading charges. And McMurray, the 43-year-old town supervisor of Grand Island, a small town less than 10 miles from Niagara Falls, had suddenly found himself in a competitive race for a district Trump won by 24 points in 2016.

As the rest of the political world would soon discover, Collins had used information gleaned from his position as a board member at a pharmaceutical company to alert his son and close associates of a failed test for a new company drug before news of it became public. Federal investigators said this information prompted Collins’ family and friends to sell their shares in the company and save over $768,000 in losses. Attorneys for the congressman said in a statement they “are confident he will be completely vindicated and exonerated.”

“The guy’s in the swamp so deep he’s got gills, but nobody wants to talk about it.”

A former county executive of Erie County with a history of what the New York Daily News once called a case of “foot-in-mouth disease,” Collins had been expected to easily jaunt to a fourth term in Congress. McMurray said a “conspiracy of silence” had blinded party bigwigs to Collins’ vulnerabilities as a candidate. “The guy’s in the swamp so deep he’s got gills,” McMurray said, “but nobody wants to talk about it.”

Few Democratic kingmakers wanted McMurray in the race in the first place. He said the Democratic Congressional Campaign Committee ignored his texts and calls for months, and even after McMurray, who has fielded some criticism for not living within the boundaries of the district, entered the race as Collins’ sole Democratic challenger, Gov. Andrew Cuomo called for him to step down and be replaced by his lieutenant governor, Kathy Hochul. McMurray did not budge from the criticism. “I’m going to use a Sarah Palin line,” he joked during a press conference Wednesday. “I can see NY-27 from my house.”

The only Democratic official he said gave him any constructive advice was the late Rochester-area lawmaker Louise Slaughter, who he credits with his campaign’s slogan: “Fight like hell.”

“It was infuriating for months and months because no one was paying attention,” he said. “I felt like Paul Revere.”

The Democratic political apparatus is paying attention now. On Wednesday morning, around the same time Cook Political Report changed the 27th District from “solid” to “likely” Republican, a DCCC staffer finally called McMurray. “‘You were literally on our Rolodex for this morning,'” McMurray recalled the staffer saying, “‘so it’s fortuitous that all of this happened at the same time.'”  He did not exactly believe that the timing was a “fortuitous” as the staffer had suggested.

But McMurray, who will need far more than the $133,975 he has raised so far to oust Collins, will accept all the help he can get. First on his agenda is professionalizing his nascent campaign operation. His thin roster of staffers includes an aide who had been working at a liquor store and a photographer McMurray scooped up after meeting him at a rally. “I think we gave him some title like ‘deputy campaign manager,’ ” McMurray said. “I think the oldest person on my campaign is 28.”

“I’ve labeled us the ‘Bad News Bears’ of politics,” he added. “We’re scrappy and scruffy, but we’re getting it done.”