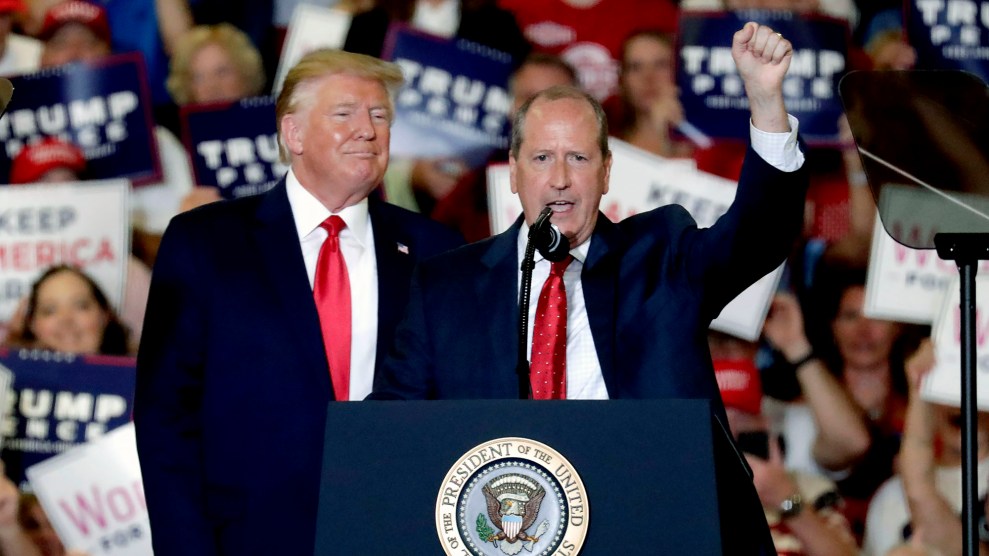 The campaign of North Carolina Republican congressional candidate Dan Bishop has associated with a far-right activist with a history of bigoted rhetoric who has defended the Proud Boys, a controversial neo-fascist outfit. Bishop, a state senator who authored North Carolina’s anti-transgender “bathroom bill,” is competing in Tuesday’s special election in the state’s 9th district.

“Thank you guys for all you are doing out there!!! We really appreciate it!”

The activist, Brian Talbert, runs a local organization called Deplorable Pride, a right-wing group that bills itself as a “conservative LGBT voice.” (Talbert said in a video posted this year that he is “against transgenders in the military.”) In June 2017, Talbert, who is gay, made national news when the board of Charlotte’s annual Pride celebration rejected his group’s application to enter a float in its parade, referring to a precedent of rejecting “participation from…organizations espousing anti-LGBTQ religious or public policy stances.” About that time, the White House, according to Talbert, called him with a message of support. According to the Charlotte Observer, the call had been initiated because the White House wanted to praise the group for joining a sit-in staged at a Starbucks, where staff had made fun of a customer wearing a T-shirt supporting President Donald Trump.

The LGBTQ advocacy organization GLAAD condemned Deplorable Pride in 2017, pointing to Talbert’s social media history. One post attributed to Talbert, which is no longer visible but was documented by GLAAD, stated, “Am I the only one pissed it wasn’t a real ban on all muslims? I say get rid of all the camel fuckers. Wipe them from the face of the earth.” (Talbert says this post was fabricated, but after GLADD publicized it, Deplorable Pride wrote in a comment on the GLAAD page, “I fully stand behind all my comments.”)  In a 2017 Facebook comment from his personal Facebook profile, Talbert said, “Mohammed sucks cocks in hell.”

Talbert has also been a supporter of the Proud Boys, which has a documented history of inciting violence, for which some of its members have been criminally charged. He has noted that the Proud Boys have offered protection to members of Deplorable Pride during his group’s public events. The Southern Poverty Law Center has deemed the Proud Boys a “hate group,” a label the Proud Boys reject. When the SPLC issued that designation in 2018, Talbert rejected it, too, criticizing the SPLC label and defending the group. “Our LBGT organization, Deplorable Pride, will always be an ally to the Proud Boys,” he said to Big League Politics at the time. In a separate post on March 12, 2018, the Deplorable Pride Facebook account declared, “Our support for the Proud Boys stands just as strong now as it did the first day we met them. They are our MAGA brothers.”

Talbert told Mother Jones he has met several times with Bishop. That includes a June meeting, after which Deplorable Pride endorsed the Republican candidate. Talbert said in a subsequent video that the June meeting lasted 45 minutes and that Bishop pledged to work with Trump on “decriminalizing homosexuality around the world.” According to a Deplorable Pride Twitter post, the group planned to offer the candidate “suggestions on the best way for the Republican party to reach out to the LGBT community and other minorities to show them a better way than the Dems.” In the months that followed, Talbert organized a series of pro-Bishop roadside rallies. In July, Talbert invited his followers to a rally for Bishop in Mecklenburg County, writing, “This is an area that Mr. Bishop has told us that he needs help.” Talbert told Mother Jones that his pro-Bishop rallies were organized independently without coordination with the campaign.

In August, Bishop’s wife, Jo Johnson Bishop, thanked Deplorable Pride in a Facebook comment underneath pictures from one of the group’s pro-Bishop events. “Thank you guys for all you are doing out there!!!” she wrote. “We really appreciate it!” On September 2, Talbert attended Bishop’s volunteer appreciation dinner and was photographed with Bishop. The Bishop campaign declined to answer questions about its relationship with Talbert.

As Mother Jones has reported, Bishop has his own history of extreme rhetoric. He once referred to a Raleigh News & Observer* article about budget cuts as “petty, jihad media,” and he has equated Black Lives Matter activists with the violent white nationalist protesters in Charlottesville.

Bishop was also an early investor in Gab, a social media site created in response to efforts by Facebook, Twitter, and YouTube to remove hate speech from their platforms. Gab bills itself as a free-speech alternative to Twitter, but it has become notorious for attracting members of the alt-right, neo-Nazis, and other extremists. Bishop still follows Gab on Twitter but has said he doesn’t use the site.

The district’s congressional seat has been vacant since January because the November midterm results were thrown out when the state Board of Elections uncovered evidence that a consultant working for then-GOP candidate Mark Harris had committed absentee ballot fraud. In May, Republicans chose Bishop, who was well-known for sponsoring the state’s “bathroom bill”—which prohibited the creation of gender-neutral restrooms—as their nominee for the special election. On Monday, Trump held for a rally for Bishop. Talbert attended the event with a VIP ticket.