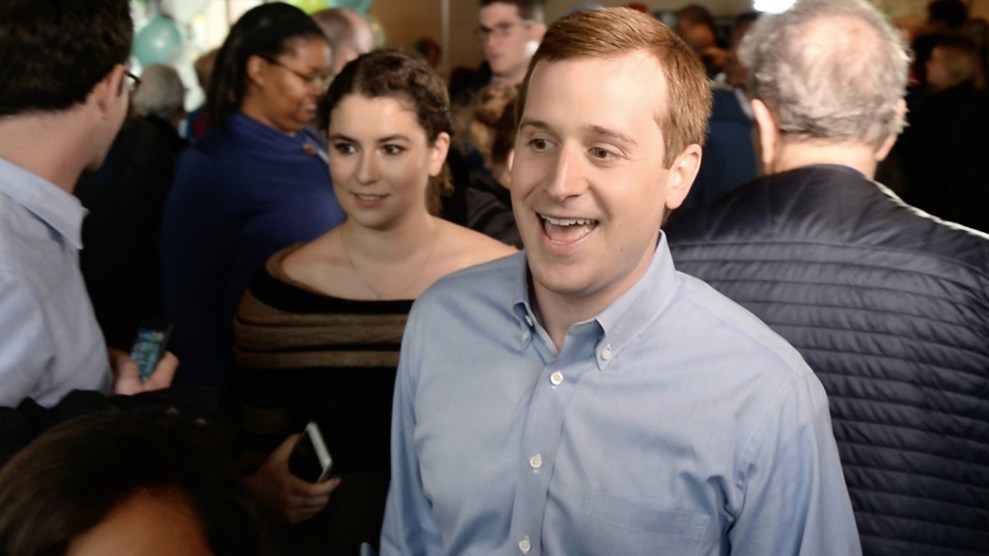 On May 4, 2017, Democrat Dan McCready got his first two donations—which came to a scant $5.83—toward his campaign to run for North Carolina’s 9th Congressional District.

Now, McCready has had more than two years to build up his funds, which currently add up to more than $11.5 million. That may sound like a lot for a House seat in a reliably red district, but this race has become a tight one, attracting national attention and big money donations after election fraud voided the original results from 2018. In fact, Republicans seem to be using this race as a bellwether of sorts for the 2020 race, testing a strategy that builds upon the one that brought President Donald Trump into the White House in 2016.

The party’s nominee is state Sen. Dan Bishop, who sponsored North Carolina’s House Bill 2, commonly known as the “bathroom bill,” that attempted to ban transgender people from using the bathroom that corresponds with their gender identity. He won the Republican primary in May; the Republican who ran for the seat in the midterms, Mark Harris, was embroiled in the election fraud scandal and ultimately dropped out of the race, citing health issues. Bishop has raised nearly $2 million since January 1.

More than $4 million has poured into the race from national Republican groups, $3.1 million of which has come from the National Republican Campaign Committee. (The Democratic Congressional Campaign Committee, on the other hand, has put up about $1 million to help elect McCready.) President Donald Trump promised to match any donations to Bishop’s campaign in an email to supporters on Tuesday. National Republicans are also showing up in the state; the president plans to fly down to Fayetteville for a rally at a regional airport the day before the election, and Donald Trump Jr. already made a campaign stop in Monroe, where he claimed McCready is supported by the “the Hamas wing of Congress.”

To put all this in perspective, Republican Robert Pittenger won reelection in the district with a little more than $1.3 million in 2016; over his entire career that spanned three elections, Pittenger raised only about $6.5 million.

Bishop has embraced a slew of Trumpist policies and rhetoric in his suburban district, emulating the president’s tone to try to win an election in the state that voted for Trump by 12 percentage points in 2016. He has attacked Democratic national leaders, including Nancy Pelosi and the so-called squad, and he has taken a hard line on immigration, backing a bill in the North Carolina legislature to compel sheriffs to comply with ICE detainers. Bishop even created a petition on his website to fire Mecklenburg County Sheriff Garry McFadden, who was resisting ICE’s detainer requests.

“This race is about Donald Trump,” Bishop’s senior adviser told a Politico reporter. The Charlotte Observer’s editorial board agreed: “Quite simply, a vote for Dan Bishop is a vote for Donald Trump.”

Republicans fear, as Greg Sargent of the Washington Post points out, that the suburban white electorate that has reliably voted Republican for the past decade or so will change course after a few years of the Trump presidency. If a solidly conservative district—the 9th went for Trump by 12 points—turns blue, then what will happen in 2020 as North Carolina turns ever more purple?

“It’s a test to the effectiveness of Republicans to win back districts with heavy suburban populations,” said the head of Club for Growth, which has invested $500,000 in ads to support Bishop.

While a local election can sometimes signal broader trends, this one has taken a uniquely national tone. North Carolina’s 9th District spills out from the Charlotte suburbs, creeps along the border of South Carolina, and hooks up to catch most of Robeson County, including Pembroke, home of the Lumbee Native American tribe, but constituents there have been more likely to hear the names of DC figures who have rarely, if ever, stepped foot in Bladen County than local officials and issues.

Republican-funded attack ads decry McCready as part of a socialist group of Democrats. Those from the National Republican Campaign Committee claim he is a corrupt businessman, hence their nickname for him: “McGreedy.” The portrait they attempt to paint of a greedy socialist is a bit confused.

McCready is actually a moderate who was endorsed by former vice president Joe Biden. McCready is a Marine veteran who shies away from hot-button issues. His answers on immigration include a desire to “secure the border,” and a solution that “needs to include some physical barriers.” He wants to cut taxes for the middle class and balance the budget, and he seems more than willing to hew to the DCCC’s focus on health care and other common Democratic talking points.

Whoever wins, each party will have 15 months to actually govern in Washington before the 2020 elections, when the incumbent will have to run again if he wants to keep his seat—about half the time McCready has spent campaigning for this race.