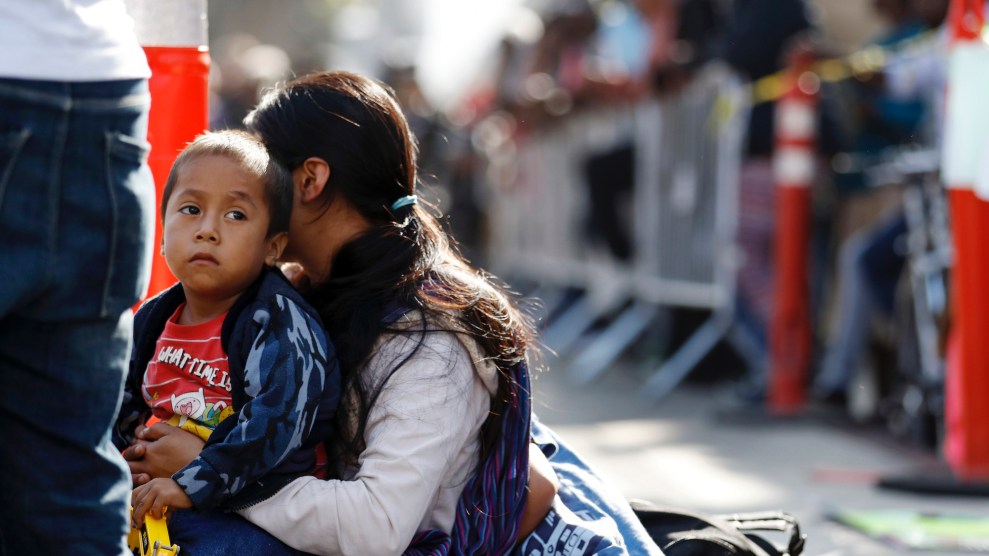 A woman sits with her son along the border in Tijuana in July as they wait to apply for asylum in the United States.Gregory Bull/AP

In his first six years as an immigration judge in New York and Atlanta, from 1993 to 1999, William Cassidy rejected more asylum seekers than any judge in the nation. A few years ago, Earle Wilson overtook Cassidy as the harshest asylum judge on the Atlanta court, which has long been considered one of the toughest immigration courts in the country.

Now both men have been elevated to the Board of Immigration Appeals, which often has the final say over whether immigrants are deported, as part of a court-packing scheme by the Trump administration that is likely to make it even more difficult for migrants fleeing persecution to gain asylum.

Paul Schmidt, who chaired the Board of Immigration of Appeals from 1995 to 2001, says the administration’s goal is to build a “deportation railway” in which cases move through the system as quickly as possible and then get “rubber-stamped by the Board.”

Until last year, the board had 17 members. The Trump administration expanded the board to 21 members, arguing it was necessary to handle an increase in appeals. That has allowed Attorney General William Barr to fill the panel with immigration hardliners. It’s reminiscent of President Franklin Roosevelt’s ill-fated 1937 effort to overcome Supreme Court resistance to the New Deal by adding up to six additional justices—only immigration courts are part of the Justice Department, giving the department the power to expand the Board and fill the new openings with judges sympathetic to the administration’s immigration crackdown.

The promotions of the six judges this month, first reported by the San Francisco Chronicle, are part of an intensifying effort to reshape immigration courts. Earlier this month, the Justice Department moved to eliminate the immigration judges’ union, which has been highly critical of the administration’s policies. On Monday, a regulation took effect that gives the head of the immigration courts, a political appointee, the power to decide appeals if judges do not hear them quickly enough. A rule that gives board members more authority to summarily deny appeals without issuing a full opinion takes effect on Tuesday.

Between 2013 and 2018, the average immigration judge approved 45 percent of asylum claims. The six judges newly promoted to the board have all approved fewer than 20 percent.

Lawyers who have appeared before Cassidy, Couch, and Wilson say all three have intense tempers. All of them had many of their asylum denials reversed by the Board of Immigration Appeals. Now they’ll be the ones deciding those appeals. (The Justice Department’s Executive Office for Immigration Review, which oversees the immigration court system, did not respond to a request to comment on details in this story.)

Cassidy is most associated with his decision to deport Mark Lyttle, a US citizen who did not speak Spanish, to Mexico during a mass deportation hearing. One Georgia attorney I spoke to blamed Immigration and Customs Enforcement for Lyttle’s removal, but Lyttle asserted that he told Cassidy twice about his US citizenship.

Glenn Fogle, an Atlanta immigration attorney, concluded in 2001, “You could have Anne Frank in front of him and he would say it was implausible that she could have hidden in the house for years and not be caught.” Now he says his feelings about Cassidy haven’t changed. He described a recent case in which Cassidy rejected a Congolese client who said he had scars on his back from being persecuted in his home country. Cassidy, presiding via an aging video system, asked the man to lift up his shirt and show the scars, then said he couldn’t see them. “Judge, how on earth could you see anything with this video?” Fogle recalls asking. Cassidy denied the asylum claim, noting in his decision that he couldn’t observe the scars.

Peter Isbister, a senior attorney with the Southern Poverty Law Center, says Cassidy sometimes writes orders denying bond requests while Isbister is still opening his argument. If he tries to finish, Cassidy can get frustrated and say something like, “You can take it up with the board. We’re done!”

In 2010, Cassidy had an asylum denial overturned because he had written the ruling before the hearing even began. The next year, Cassidy sat down in another judge’s courtroom in his judicial robe. In what one observer described as a “surreal” scene, Cassidy then raised his hand and told how the judge how the case should be handled. Assistant Chief Immigration Judge Deepali Nadkarni admonished Cassidy for his “inappropriate conduct.” In 2016, Cassidy compared an immigrant arriving at the border to “a person coming to your home in a Halloween mask, waving a knife dripping with blood.”

Paul Schmidt, who chaired the Board of Immigration of Appeals from 1995 to 2001, says the administration’s goal is to build a “deportation railway.”

Cassidy and Couch have both suggested that asylum seekers are dishonest and trying to scam their way into the country. A Charlotte immigration attorney, who requested anonymity because Couch is now handling appeals, heard Couch say he believes 85 percent of asylum seekers are lying, that 10 percent are telling the truth but not eligible for protection, and that 5 percent are both honest and eligible for asylum. Couch is also skeptical of lawyers. When an out-of-state lawyer couldn’t make it to a hearing because of a funeral, Couch called the funeral home to verify the claim, according to the Charlotte attorney.

In 2004, Couch, then a military prosecutor, attracted widespread attention for refusing to prosecute a Guantanamo detainee because he had been tortured. But as an immigration judge, Couch has almost always ruled against people who say they’ve been persecuted. He is best known among immigration attorneys for his 2015 decision to deny asylum to a woman who said she had been repeatedly physically and sexually abused by her ex-husband. One year later, the Board of Immigration Appeals overturned Couch’s ruling and ordered him to grant her asylum. But Couch again declined to do so. The case gained prominence when Jeff Sessions, then the attorney general, used it to issue a sweeping precedent that made it much harder for asylum seekers to claim domestic violence as a reason for asylum. (Couch isn’t uniformly anti-immigration—Jeremy McKinney, a North Carolina attorney and the vice president of the American Immigration Lawyers Association, saw him lobby North Carolina Sen. Thom Tillis to greatly expand Central Americans’ access to temporary visas—but has a narrow view of who qualifies for asylum.)

Wilson has the highest asylum denial rate of the six new appointees. His most notable habit is leaning back in his chair while respondents are testifying and closing his eyes so that it looks like he’s sleeping. In one case, according to an observer from Emory University’s law school, Wilson leaned back with his eyes closed for 23 minutes as an asylum seeker described the murder of her parents and siblings.

Like the others, Wilson has often been overturned by the appeals board he is now a part of. In one case, he ruled against a victim of domestic violence partly on the grounds that she had been able leave her abuser and reach the United States. “We disagree,” the Board decided. “Although the respondent did ultimately come to the United States to escape her abuser, by definition, any person applying for asylum in the United States has fled the harm that they experienced.”

Under the regulation that goes into effect Tuesday, Board members will have more authority to summarily deny appeals without providing any justification. Charles Kuck, an Atlanta attorney and former president of the American Immigration Lawyers Associations, expects that to lead to an assembly-line system like the one that existed under the George W. Bush administration, when Board members sometimes issued more than 50 decisions a day.

Two decades later, one Cassidy case still sticks with Fogle. His client was a former Ethiopian government official. As he was telling his story, Fogle remembers, Cassidy jumped up, turned off the court’s audio recorder, and yelled, “Bullshit!” His client insisted he was telling the truth.

Fogle says it was among the most unprofessional behavior he has ever seen from a judge. “I’ve been around,” he says. “I will never forget that.” He adds, “That’s the guy that’s going to be adjudicating appeals from other immigration judges.”