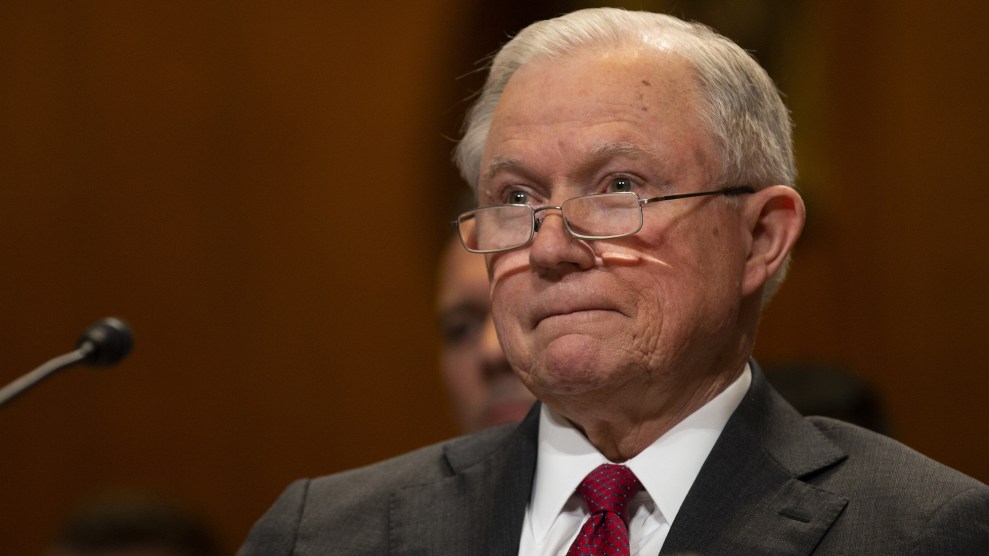 Attorney General Jeff Sessions has just made it dramatically harder for victims of violence to receive asylum in the United States. Using his authority over the US immigration court system, Sessions decided Monday that people fleeing gangs and domestic violence will generally not qualify for asylum.

To receive asylum, applicants have to show they were persecuted because of characteristics such as their race, religion, or membership in a “particular social group.” Sessions wrote Monday that a gang’s victims have not necessarily “been targeted ‘on account of’ their membership” in a social group just because the gang harassed a certain geographical area. He expressed similar skepticism about domestic violence claims, overturning a 2014 case that established that “married women in Guatemala who are unable to leave their relationship” can count as a social group.

Michelle Brané, the director of the Migrant Rights and Justice program at the Women’s Refugee Commission, calls the decision a “devastating blow” to families who come to the United States seeking protection. “What this means in practical terms is that the United States is turning its back on our commitment to never again send people back to a country where their life is at risk,” she says in an email. “Women and children will die as a result of these policies.”

Michael Kagan, a law professor at the University of Nevada-Las Vegas, explained the implications of Sessions’ decision on Twitter:

And so: This decision is not likely to be the last word on the legal matters. But it is likely to lead innocent people to be beaten, raped, and killed.

Sessions was weighing in specifically on the case of a Salvadoran woman known as Ms. A-B-, who sought asylum in the United States after surviving 15 years of physical, sexual, and emotional abuse at the hands of her ex-husband, with whom she has three children. She attempted to escape him by moving to another Salvadoran town, obtaining restraining orders, and divorcing him, but the threats and violence continued, according to her court filings. The man’s brother was a police officer, and the authorities did little to intervene, once telling her, “If you have any dignity, you will get out of here.” So she did, traveling to the United States in June 2014 and applying for asylum.

“Women and children will die as a result of these policies.”

There was no guarantee of success. Since 2014, immigration court precedent has made it clear that survivors of domestic violence can qualify for asylum only if the violence rises to the level of “persecution” and their government is unable or unwilling to protect them. But the immigration court judges who evaluate asylum claims like Ms A-B-‘s have widely varying track records, with some granting asylum to the vast majority of applicants and others approving fewer than 5 percent. Ms. A-B-‘s case was assigned to one of the strictest judges in the country: V. Stuart Couch in Charlotte, who has a 14 percent asylum approval rate, according to one analysis, as well as a history of having his rulings overturned after he denied asylum to women fleeing domestic violence. So it was no surprise when he refused to grant Ms. A-B- asylum—or when the Justice Department’s Board of Immigration Appeals reversed his decision.

That’s where Sessions comes in. As head of the Justice Department, which includes the immigration courts, the attorney general has the power to intervene in cases to determine how immigration law is interpreted. Before Ms. A-B-‘s asylum status was formally granted (Couch delayed approving it), Sessions stepped in, referring the case to himself for review and leaving Ms. A-B- in limbo.

“I feel like they are playing with me, like I’m a child who got candy only to have it taken away.”

The decision is in line with other steps Sessions and the Trump administration have taken to undercut the American asylum system. The month after President Donald Trump’s inauguration—and after Trump’s executive order to suspend the US refugee program—the Department of Homeland Security made it harder for asylum seekers arriving at the border to pass an initial screening. Those who did pass were increasingly locked up without the possibility of parole in Immigration and Customs Enforcement detention centers. In January, US Citizenship and Immigration Services ordered immigration judges to rule on more recent asylum applications before older ones, diminishing asylum seekers’ ability to remain in the safety of the United States while their applications move through the courts. And in March, Sessions canceled a four-year-old Board of Immigration Appeals ruling that gave asylum seekers the right to a full hearing.

Last month, Sessions revoked immigration judges’ broad authority to close cases through a process known as administrative closure after referring a different case to himself. The procedure does not provide permanent residency, but it can allow immigrants to live in the United States indefinitely. The decision could force immigration judges to reopen many of the roughly 350,000 cases that were administratively closed before the end of the 2017 fiscal year, despite the fact that there is already a more than 700,000-case backlog.

For months, it’s been unclear to both Ms. A-B-‘s legal team and DHS lawyers what question, exactly, Sessions planned to weigh in on. Advocates feared he would attempt to roll back the legal precedent that allows victims of gender-based violence—including female genital cutting, forced marriage, and anti-LGBT violence, along with domestic abuse—to seek sanctuary in the United States. In his March order intervening in the case, the attorney general asked both sides for arguments on whether being the victim of “private criminal activity” like domestic or gang violence can qualify a person for asylum. But the answer—yes, under certain conditions—has been “a well-established principle in asylum law since 1980,” says Ms. A-B-‘s lawyer, Blaine Bookey of the Center for Gender and Refugee Studies at the University of California-Hastings. “To overturn that, he would be overturning 30 years of precedent.”

Last fall, Sessions hinted in a speech that he would try to limit the circumstances under which asylum can be granted. “Our asylum laws are meant to protect those who, because of characteristics like their race, religion, nationality, or political opinions cannot find protection in their home countries,” he said. “They were never intended to provide asylum to all those who fear generalized violence, crime, personal vendettas, or a lack of job prospects.”