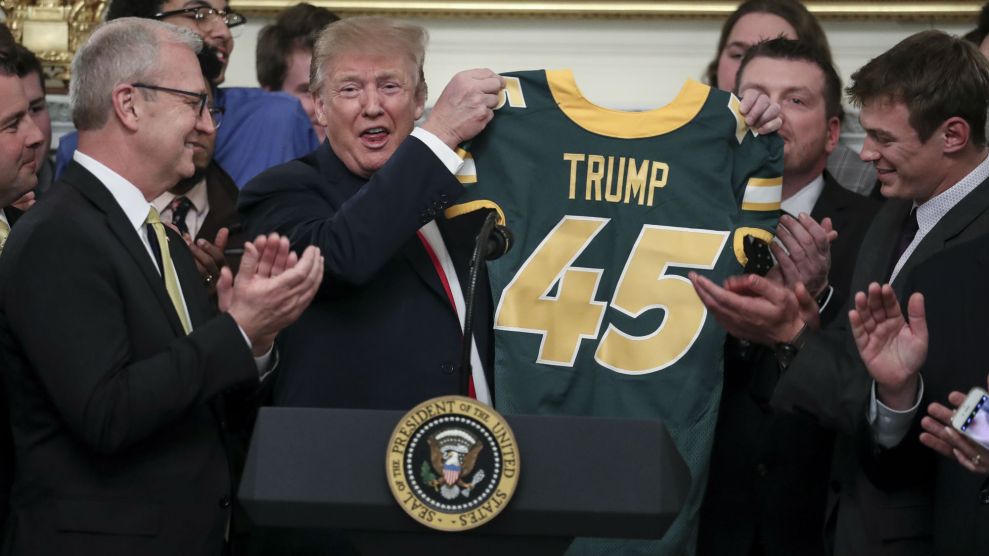 In a Saturday morning tweet, President Trump offered congratulations to Nick Bosa, the Ohio State defensive end who this week became the second overall pick in the NFL draft, after facing criticism for past racist tweets and supporting social media posts with racist and homophobic hashtags. The first player picked in the draft, Oklahoma quarterback Kyle Murray, who is black, received no mention on Trump’s Twitter feed.

Congratulations to Nick Bosa on being picked number two in the NFL Draft. You will be a great player for years to come, maybe one of the best. Big Talent! San Francisco will embrace you but most importantly, always stay true to yourself. MAKE AMERICA GREAT AGAIN!

Bosa is white and will join the San Francisco 49ers. In recent days, the San Francisco Chronicle, news outlets, and Twitter users have dug up his social media history. The website Black Sports Online posted threads showing Bosa following and liking posts from accounts that repeatedly used the n-word and poked fun at tennis player Venus Williams. Others noted Bosa’s recently deleted tweets where he criticized Beyonce’s music, the Black Panther movie, and Colin Kaepernick—the former 49ers quarterback who launched a racial justice protest movement with his decision to kneel rather than stand during the national anthem at football games—who Bosa called a “clown,” and also retweeted a tweet referring to him as “crappernick.” Bosa has also deleted his tweets expressing support for the president.

Trump’s tweet in support of Bosa is notable given the president’s long history of criticizing Kaepernick. Trump often blasted the quarterback’s decision to kneel during the anthem while campaigning, and has continued to do so since arriving at the White House. He made fun of Kaepernick during a 2017 rally in Kentucky, criticized Nike for making the quarterback the face of a 2018 ad campaign, and pressured NFL team owners to change league rules to outlaw protests like Kaepernick’s.

Both the general manager and head coach of the 49ers were asked about Bosa’s social media history at a news conference this week, and sought to play down the controversy. On Friday, Bosa apologized for his social media posts and to Kaepernick for calling him a clown, saying it was a “bad decision.” When asked about the tweets in an interview with ESPN before the draft, Bosa said he deleted the tweets because “I might end up in San Francisco.”