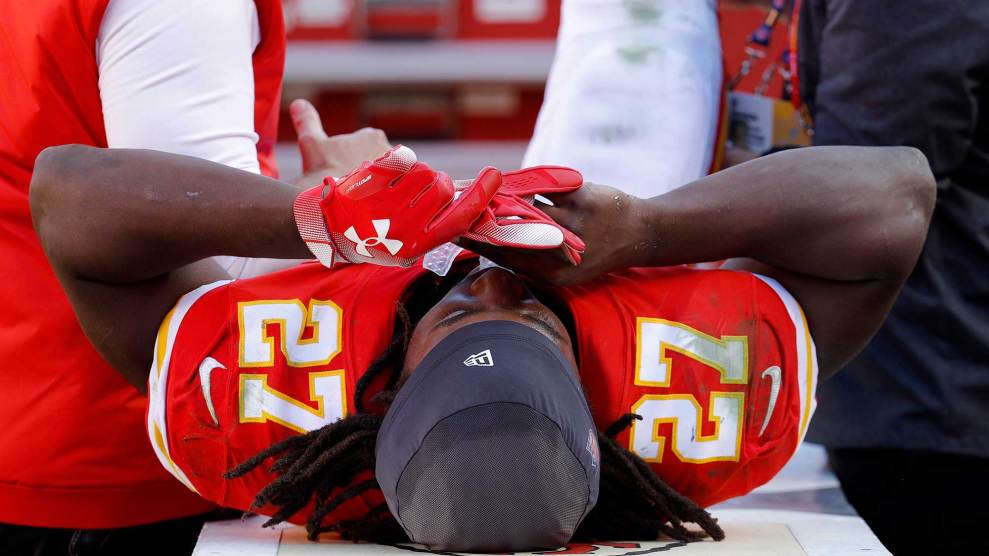 The NFL has long had a problem with how to investigate and discipline its players accused of domestic violence, but the first signs that the league—just maybe—is beginning to take it more seriously came Friday night. The Kansas City Chiefs, one of the best teams in football this season, let go of star running back Kareem Hunt hours after celebrity website TMZ published a video from February of him shoving and pushing a woman. Importantly, the NFL also put Hunt on its exempt list, which bars him from playing or attending any games while he is under investigations, making it unlikely he just gets scooped up by another team.

The team and NFL have been aware of the incident and investigating since February, though a spokesperson for the league says that it had not been able to get ahold of the video from Cleveland police. In a statement, the Chiefs said team officials spoke with Hunt earlier this year about the incident but had since discovered that he “was not truthful in those discussions. The video released today confirms that fact.” (Hunt also allegedly punched a man in the offseason, but the team took no action.)

While there are many remaining questions about why the NFL and the Chiefs were unable to obtain the video published on TMZ, the decisive and swift response is a break in the league’s long history of overlooking violence against women.

Controversy over the NFL’s inadequate policies exploded in 2014, when Baltimore Ravens running back Ray Rice was taped knocking out his then-fiancée. The league suspended him for just two games, and it took weeks of public outrage before Commissioner Roger Goodell issued an apology and suspended Rice indefinitely.

The NFL vowed after the Rice incident to improve its policies, including clearer penalties for its players and a more thorough investigative team. But it’s fallen into similar patterns again and again. Last weekend, the San Francisco’s 49ers dropped linebacker Reuben Foster after he was arrested on a domestic-violence charge. He was signed two days later by Washington’s football team. The team, already known for its many controversies, defended Foster, with the former star quarterback and senior vice president Doug Williams noting other people “have done far worse.” (He later apologized.) The NFL responded by putting Foster on paid leave Tuesday, ensuring he will not play while he is under investigation.

It may not be that the league is reforming, but that public pressure has reached a tipping point in the face of its other problems and an era defined by the #MeToo movement. As former NFL player Ray Crockett tweeted Friday before the league made its move:

Players You have to do better and be better! NFL, this is a bad look for the League! You cant just act like you are against domestic violence. You have to be about it. Kareem Hunt has to be suspended. I understand we all make mistakes but that doesnt change the fact. He's WRONG!!