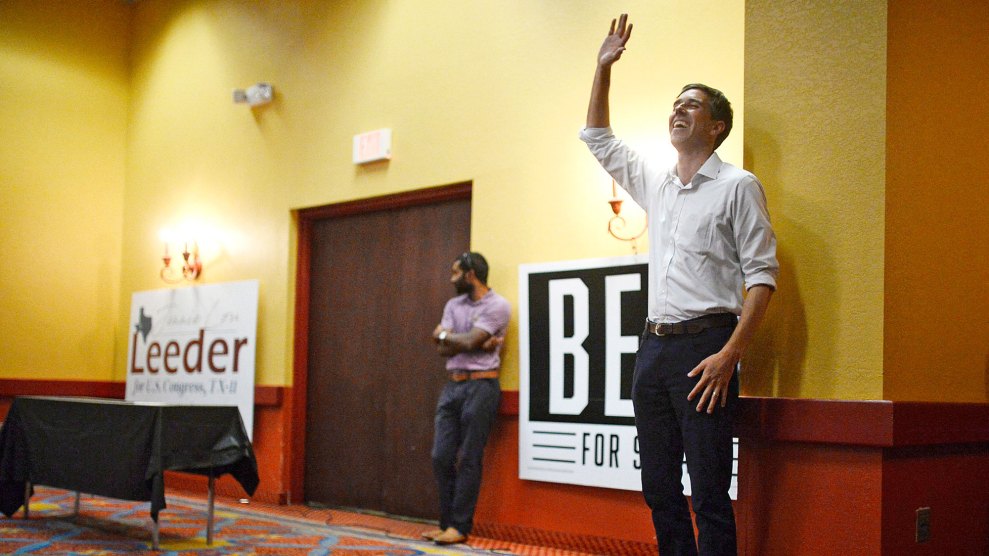 On Tuesday, followers of America’s most-polled Senate race got a new toy to play with: A Quinnipiac survey gave Republican Sen. Ted Cruz a nine-point lead, the biggest margin anyone’s found for months. Then, on Wednesday morning, a new poll. This one, from Reuters and the University of Virginia, shows something entirely different: that O’Rourke is on top for the first time ever. The survey, conducted over basically the same period, has O’Rourke up by two points, 47–45, even as the broader slate of polls offered mixed results for Democrats across the board. (It showed them trailing in must-win races in Nevada and Florida.) O’Rourke got his best news yet—one day after he got his worst news.

But something else happened on Tuesday night that has ramifications for the November elections. In a heavily Hispanic San Antonio-based state Senate district long held by Democrats, Republican Pete Flores won a surprise special-election victory to replace a Democrat who was recently sentenced to 12 years in prison for his involvement with a company that ran a Ponzi scheme. These things happen, and special elections—especially runoff special elections—are fluky, but Flores was running for state Senate against Pete Gallego, the district’s former Democratic congressman. Gallego may be an underwhelming campaigner, but it was a race the party should have won.

It’s fair to say that Texas Democrats are on shakier ground than their peers are in other states.

Making matters worse for Democrats, the district Flores won is now part of Republican Rep. Will Hurd’s 23rd congressional district, which was carried handily by Hillary Clinton in 2016 and has become a top target for the Democratic Party this fall. On paper, it’s the single most-winnable seat in Texas, but a recent New York Times poll showed Hurd with a significant lead over his challenger, Democrat Gina Ortiz Jones. Flores’ victory won’t make Democrats feel any better about their chances.

There’s not a clear through-line between the three aforementioned data points. One seems good for progressives, two seem bad. But six weeks out from election day it’s fair to say that Texas Democrats, who have been out of contention for so long, are operating on a much shakier playing field than their compatriots are in other states.

This has always been the catch when Democrats talk about efforts to “turn Texas blue.” Solving the problem that is Texas requires a lot more than numbers on paper; it means really grappling with the foundational work of civic engagement. O’Rourke and his traveling, jogging, Facebook-streaming roadshow have given Texas Democrats the kind of jolt they haven’t had in years. But hope is one thing; rebuilding a machine from scratch is something else.