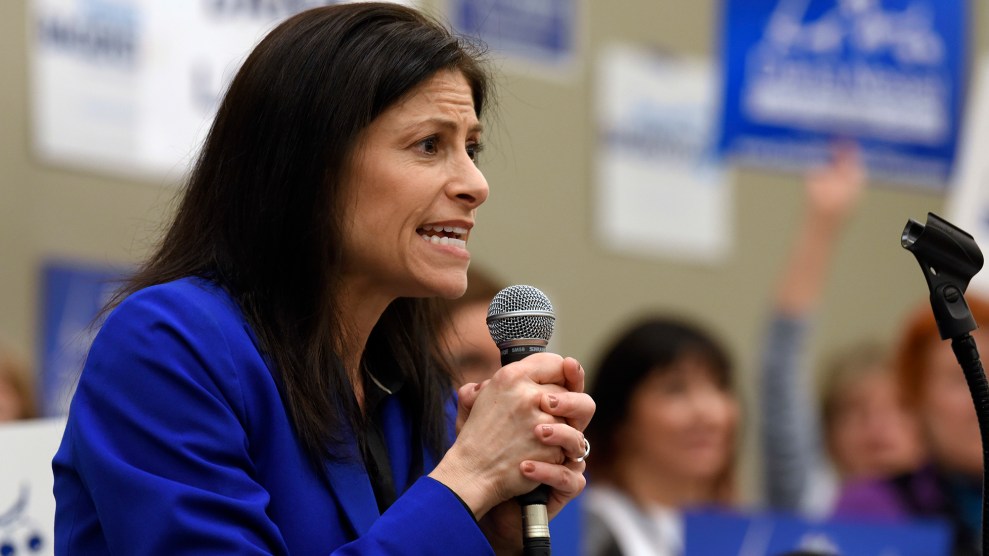 When Rep. Keith Ellison, the deputy chair of the Democratic National Committee, announced in June that he planned to leave Congress to run for attorney general in his home state of Minnesota, political pundits wondered why he was giving up a safe seat in Washington during the midterms, when Democrats are desperately hoping to retake the House after years of Republican control. “There’s some things a member of Congress can’t do,” Ellison explained. As state attorney general, he’d have “the one job in politics where you can do the most good as quickly as possible.”

With a GOP majority in Congress, Democrats have found that the fastest way to fight President Donald Trump’s agenda isn’t in the legislature: It’s through the courts. As the top law enforcement officials in their states, Democratic attorneys general have acted swiftly to sue the feds over everything from the travel ban and the family separation policy to environmental deregulation and the rollback of net neutrality. These once-sleepy AG races are now attracting much more attention—and donors are shelling out unprecedented sums for their candidates. By some estimates, Democrats and Republicans are expected to spend over $100 million total on these campaigns, two or three times more than they’ve ever spent on them in the past.

Democrats and Republicans are expected to spend over $100 million total on these campaigns—two or three times more than they’ve ever spent on them in the past.

The rules of the game have changed, too, making the races more competitive. Traditionally, both sides followed what’s known as the “incumbency rule,” which meant that Democrats and Republicans agreed not to target the other party’s sitting attorneys general during elections. This truce originated in the early 2000s, when Republicansheld a minority of attorneys general seats nationally and wanted to preserve the ones they had in future elections. The idea was also to encourage more bipartisanship, since attorneys general sometimes work across party and state lines, as with the anti-tobacco-industry litigation of the 1990s or the recent multistate investigation of opioid manufacturers.

But in March last year, the Republican Attorneys General Association, which raises money for Republican candidates, said it was ditching the incumbency rule. It was “game on,” says Sean Rankin, executive director of the Democratic Attorneys General Association. During the first election after that, in Virginia last November, Republicans tried unsuccessfully to oust incumbent Democrat Mark Herring; each side spent about $9 million, by far the most in the state’s history for such a race.

In this year’s midterms, attorneys general seats in 30 states and the District of Columbia are up for grabs. Republicans currently boast an advantage—their party has attorneys general in 27 states today, up from 12 states in 2000. But with the incumbency rule out the window, Democrats are hoping for a comeback. According to an analysis by Louis Jacobson of Governing magazine, 6 of the 31 races on the ballot next month are considered tossups—Colorado, Florida, Michigan, Nevada, Ohio, and Wisconsin—and in each case, Republicans currently hold the seat. “In a neutral environment, this would suggest the Democrats could expect to gain a couple of seats,” Jacobson writes. “But if there’s a Democratic wave, the party might win even more than that, perhaps enough to turn an overall Republican lead in AG seats into a Democratic one.”

In this year’s midterms, attorneys general seats in 30 states and the District of Columbia are up for grabs.

Democrats need four more seats to take a majority. They’re looking partly to Colorado, where Republican George Brauchler, a district attorney who prosecuted the Aurora mass shooting, faces Democrat Phil Weiser, a former law school dean who worked for the Obama administration and clerked for Supreme Court Justice Ruth Bader Ginsburg. In Nevada, where three of the past four attorneys general have been Republicans, early polls came back favorably for the Democratic candidate, state Senate Majority Leader Aaron Ford, who’s advocating tougher gun control after the 2017 mass shooting in Las Vegas. (He’s facing criticism, though, over an arrest record from his 20s, including for public intoxication, stealing tires, and failure to appear in court.)

Wisconsin is another competitive race: Republican incumbent Brad Schimel is a staunch conservative who sued over Barack Obama’s health care reforms and last year spoke at a conference hosted by the Alliance Defending Freedom, a Christian legal powerhouse pushing to roll back gay rights. Democratic challenger Josh Kaul, the son of a former Democratic state attorney general, worked as one of Hillary Clinton’s attorneys during Wisconsin’s 2016 presidential recount.

In Michigan, another tossup state, Democrat Dana Nessel, an openly gay attorney from Detroit, is up against Republican Tom Leonard, a member of the state House who touts his anti-abortion voting record. (Nessel’s #MeToo-inspired campaign ad went viral last year when she asked, “Who can you trust most not to show you their penis in a professional setting? Is it the candidate who doesn’t have a penis?”) In Ohio, which is one of the more expensive campaigns, Democrats have slammed the Republican candidate, State Auditor Dave Yost, for his handling of the ECOT charter school scandal that cost the state tens of millions of dollars—he took political donations from the school and spoke at its graduation ceremony. “Yost had his arm around those executives,” says Rankin of the Democratic Attorneys General Association. “He was more concerned about his political career than taking care of families and kids in Ohio.”

Meanwhile, the race in Minnesota, which leans Democratic, according to the analysis by Governing‘s Jacobson, came into the national spotlight after Rep. Ellison jumped into the ring, though recent allegations that he abused a former girlfriend have complicated his campaign. Arizona is also drawing attention. That race leans Republican, but incumbent Mark Brnovich could face a tough fight against Democratic opponent January Contreras, a former Obama official who is the first Latina to run for attorney general in the state.

With such high stakes nationally, the Democratic Attorneys General Association expects to bring in roughly $14 million this year, almost twice as much as last year. Its Republican counterpart had raised $21 million as of April, with key donors including the US Chamber of Commerce, a lobbying group; the Judicial Crisis Network, a conservative outfit pushing for the nomination of more conservative federal judges; the National Rifle Association and Koch Industries, the conglomerate of the Koch brothers; and businesses like Las Vegas Sands, Blue Cross Blue Shield, and Purdue Pharma. Some of the same big companies also donate to the Democratic association, as do labor groups like the Teamsters Union. Planned Parenthood is the association’s biggest donor, says Rankin.

The Democratic Attorneys General Association expects to bring in roughly $14 million this year, twice as much as last year.

These donations are a good bang for their buck: Attorneys general races are generally much cheaper than congressional races, and the candidates who are elected will wield a lot of power. Increasingly, they are also focusing on national policy and often banding together to do so. According to Paul Nolette, an associate professor of political science at Marquette University, the number of multistate lawsuits filed annually by attorneys general against the federal government doubled after 2014, as Republicans went on the offensive against the Affordable Care Act and other Democratic policies. During Trump’s first year in office, the number of multistate lawsuits against the feds jumped to 36.

And donors know the attorney general office is a stepping stone. Scott Pruitt, the former chief of Trump’s Environmental Protection Agency, previously served as Oklahoma’s attorney general and chair of the Republican Attorneys General Association. Kamala Harris is one of nine senators today who once worked as their states’ top law enforcement official. Attorneys general candidates “are attracting attention from deep pockets not necessarily because of what they will do as AG—sue someone or not sue someone—but because of where they might end up next, and for most of the donors the money is chump change,” says James Tierney, a lecturer at Harvard who served as the attorney general of Maine during the 1980s.

In recent years, companies also boosted their donations because attorneys general play a major role in corporate oversight, affecting industries like banking, pharmaceuticals, and utilities. “These are lower-profile perhaps than the big net neutrality or travel ban suits but nevertheless involve billions of dollars,” Nolette says. But there are ethical concerns with these contributions: CBS News examined dozens of donations greater than $50,000 to the Republican association and found that more than half the donors “had matters under consideration by a state attorney general or had recently settled.”

The NRA, for example, gave the association $700,000 a few weeks after the Las Vegas shooting last year; a month later, nearly all the country’s Republican attorneys general sent a letter to Congress urging lawmakers to approve concealed-carry legislation. (The NRA said its donation “had nothing to do” with the letter to Congress,” according to CBS, and that it was consistent with its support of “pro-Second Amendment candidates.”) Most Democratic attorneys general came out against the legislation not long after the Democratic Attorneys General Association received $50,000 from Mike Bloomberg’s Everytown for Gun Safety group. Responding to a question about ethical concerns, a spokeswoman for Everytown said the group was proud to support Democratic attorneys general who stand up for gun safety laws.

The end of the incumbency rule, says Tierney, could make it more difficult for attorneys general to collaborate on litigation that affects many states, red and blue, including against pharmaceutical companies. “Now that AGs can run against other AGs, I imagine it’s pretty difficult for them to have confidential discussions across party lines, and that’s a problem,” he says.

“This trend toward money coming into AG offices, if anything, is just going to continue to grow,” says Nolette. “It’s been a continual growth in the importance of this office over time, and I don’t see that slowing down anytime soon.”