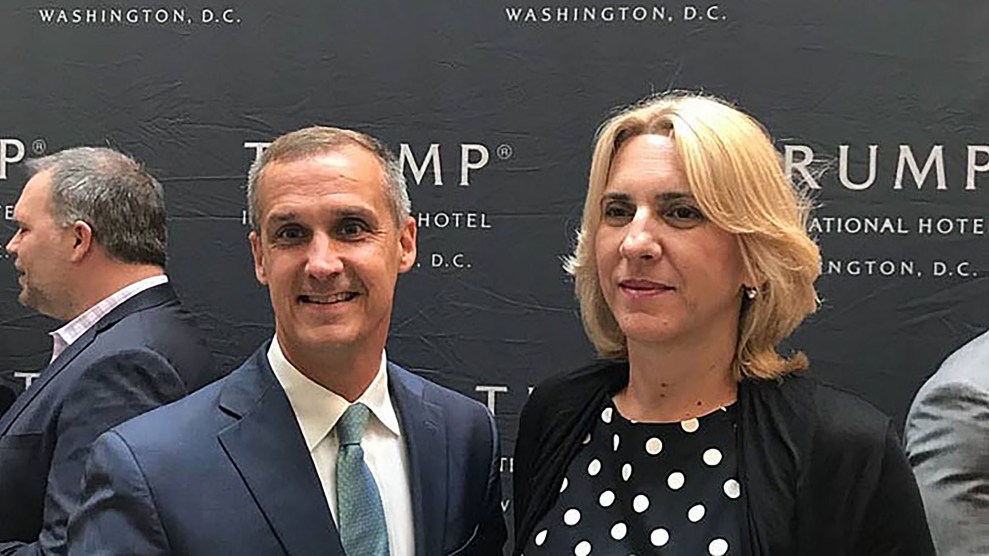 Representatives of a Russian-backed Serbian separatist party in Bosnia, whose leader has been sanctioned by the Treasury Department, have been courting Trump administration officials and allies and recently signed up two former Trump campaign officials to help them connect with Republican lawmakers.

Former Trump campaign aides Jason Osborne and Mike Rubino have registered with the Justice Department to lobby for the political party of Milorad Dodik, the president of Republika Srpska, the Serbian enclave in Bosnia. Dodik has talked of his republic seceding from Bosnia and merging with Serbia, escalating tensions in a country governed by the 1995 Dayton Accords, which ended a bloody three-year war among former Yugoslavian states. The United States sanctioned Dodik last year for undermining the accords through his calls for secession and other actions.

Dodik has won backing from Russia, which has embraced his opposition to Bosnia joining NATO and generally supports nationalist parties and movements, especially those in Eastern Europe. Russia allegedly supported an attempted coup in nearby Montenegro to stop the state from joining NATO. A Bosnian publication reported earlier this year that Russian intelligence helped train a paramilitary unit that acts as a security force for Dodik.

Osborne told Mother Jones that Dodik’s party, the Alliance of Independent Social Democrats, has verbally agreed to pay $10,000 per month for three months to Twin Rocks Global, a limited liability company that he and Rubino established last month. The firm’s Foreign Agent Registration Act filings say it will provide “strategic guidance and counsel with regard to government affairs and public relations activity within the U.S.”

Osborne said his work for the Bosnian Serbs so far has entailed setting up meetings for Republika Srpska Prime Minister Zeljka Cvijanovic, who visited Washington last month. Osborne said he arranged for Cvijanovic to meet with Sen. Roger Wicker (R-Miss.), who is chairman of the US Helsinki Commission, a federal agency that promotes human rights and democracy in Europe. He also set up a meeting between Cvijanovic and Rep. Dana Rohrabacher (R-Calif.), who chairs a House Foreign Affairs subcommittee on Europe, Eurasia, and emerging threats and who often supports ethnic groups seeking to establish independent states. Rohrabacher is known for his Russia-friendly views—he’s been dubbed “Putin’s favorite congressman”—and the FBI once reportedly warned him that Russian spies considered him a potential intelligence asset.

During Cvijanovic’s visit to DC she attended a July 25 book party, held in the Trump Hotel, for Jeanine Pirro, a former prosecutor and reliable Trump cheerleader. A press release issued by Cvijanovic’s office touted her meeting at the event with “the closest associates of the US President Donald [Trump],” including Kellyanne Conway, Sarah Huckabee Sanders, and former Trump campaign manager Corey Lewandowski (with whom Cvijanovic posed for a picture).

Cvijanovic also met July 29 with former senior White House aide Steve Bannon at his Washington home, Republika Srpska’s government announced. Bannon, who was fired from his White House job last year, told the Daily Beast last month that he plans to set up a foundation based in Brussels to aid right-wing populists in Europe. His meeting with Cvijanovic highlights the extent to which his plans dovetail with Russian foreign policy. Bannon did not respond to inquiries, nor did spokespeople for Rohrabacher and Wicker.

“Dodik is useful to the Russians because he is opposed to NATO accession and has stalled on requirements that the EU has leveled on Bosnia,” said David Salvo, a former foreign service officer who studies Russia’s Balkan policy at the German Marshall Fund’s Alliance for Securing Democracy. “That plays right into Russia’s interest.”

Osborne, who said he was not involved in setting up the Bannon meeting, noted that Cvijanovic downplayed her party’s Russian ties and touted its desire for stronger relations with the United States. She wanted to establish a “line of communication that wasn’t there before,” he said. “She wanted to sit down and share her side of the story.”

Dodik has mused publicly about breaking away from Bosnia and joining Serbia, but Osborne said Cvijanovic told Wicker and Rohrabacher that the Bosnian Serbs “don’t want independence” and merely want to ensure their autonomy within Bosnia. Osborne also said he had no contact with Dodik and received assurances from the Alliance of Independent Social Democrats that his firm’s lobbying would not “have anything to do with promoting Russian interests.”

Osborne and Rubino run the lobbying firm Turnberry Solutions, named after a golf course that Trump owns in Scotland. All of Turnberry’s reported clients are domestic. Osborne said he and his partner set up Twin Rocks Global, named for an Oregon town where he has a home, to separately handle foreign lobbying, which has different disclosure requirements.

Both firms list their address in the same Capitol Hill rowhouse where Corey Lewandowski lives. Lewandowski has denied working as a lobbyist and has claimed he has no ties to Turnberry. Osborne called Lewandowski a “dear, close friend” and said that neither Turnbery nor Twin Rocks have any connection to the former Trump campaign chief. Osborne also denied that clients seek his services based on a perceived association with Lewandowski, who reportedly remains an informal adviser to Trump. “If they were going to hire Corey, they would hire Corey,” Osborne said. “I wouldn’t set up a separate company to hide things.”

Still, Lewandowski seems to have some connection to Osborne and Rubino’s work. In April, both men joined Lewandowski on a visit to Belgrade, Serbia, where Lewandowski spoke at a roundtable and posed for pictures with business executives and politicians. A member of Serbia’s opposition party claimed Lewandowski was trying to win a contract for Turnberry to represent Serbian President Aleksander Vucic in Washington.

“Any country that wants to have stronger and better relations with the US has a unique opportunity to do that now during President Trump’s administration, because he looks at the future and builds new relations,” Lewandowski said at the event, according to a local publication. “Your presence in Washington is a key to the improvement of mutual relations. I hope you will use this opportunity.”

Lewandowski and Osborne have denied they were in Belgrade seeking business. Osborne also claimed he was not pursuing a lobbying deal when, a couple months later, he and Rubino returned to the region “just to visit” and wound up meeting with Cvijanovic during a stop in Banja Luka, Rebublika Srpska’s capital. Weeks later, Osborne said, the Alliance of Independent Social Democrats reached out to retain his lobbying services.

Bosnia is set for elections in October, amid reports of Russian efforts to encourage ethnic tensions in the country in a bid to undermine US and European Union policy in the region. Osborne said he has not signed on to advise the Bosnian Serbs through the election, but he did not rule out doing so. “Any time you engage with a client,” he said, “you hope it continues.”