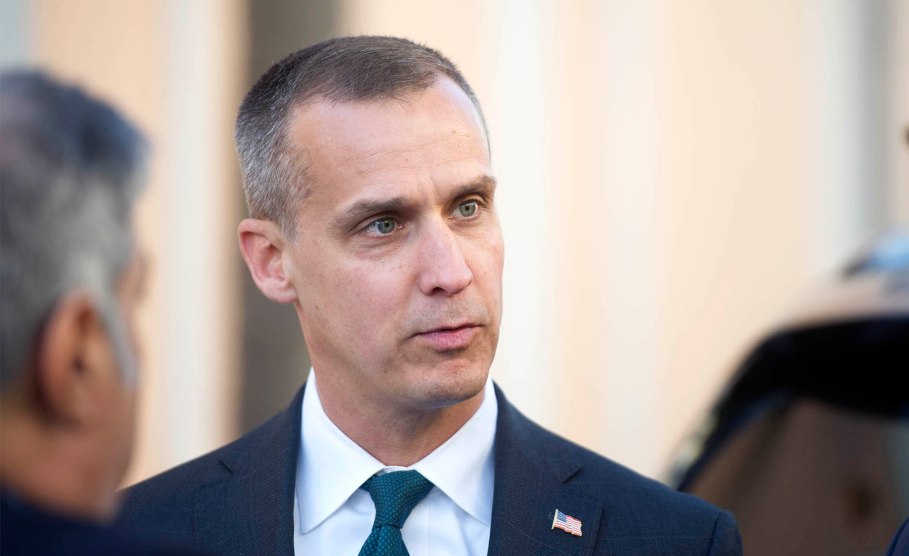 Former Trump campaign manager Corey Lewandowski showed up in Belgrade, Serbia, on Monday, where he spoke at a roundtable event for business officials on the topic of “America Today.” But his visit raised questions about whether he was also there as a lobbyist—activity Lewandowski has denied doing since the 2016 election—with one prominent local politician accusing Lewandowski of seeking a deal to help Serbia’s president gain access to President Trump.

Lewandowski spoke at an event hosted by East West Bridge, a Serbian nonprofit that says it promotes reforms aimed at helping Serbia join the European Union. He also met with a group of prominent business leaders and posed for pictures with Aleksandar Nikolić, a senior Serbian politician and chairman of East West Bridge’s board of governors.

According to Nikolić’s biography from East West Bridge, he is a top official in Serbia’s Ministry of Interior and is a co-founder of the conservative Serbian Progressive Party, which is led by Serbia’s current president Aleksander Vucic.

Lewandowski was accompanied by Mike Rubino and Jason Osborne, two former Trump campaign aides who are now registered lobbyists for Turnberry Solutions—a firm headquartered in the Capitol Hill townhouse where Lewandowski lives and which his friends have dubbed “The Lewandowski Embassy.”

Lewandowski has denied any connection to Turnberry Solutions, which is named after a Scottish golf course owned by President Trump. Lewandowski has also denied that he pursues work lobbying for foreign governments, despite multiple reports suggesting that he has been touting access to Trump to win business from foreign leaders. Politico reported last year that Lewandowski, as part of a pitch for a lobbying deal, told Azerbaijan’s ambassador to the US that he could get the country’s president a meeting with Trump, and that he had dangled his ability to deliver Trump meetings to other foreign officials. The Daily Beast reported last week that Lewandowski helped broker a deal between a group of Poland’s top military contractors and the BGR Group. Lewandowski denied direct contact with the Polish defense contractor cited in the story, but otherwise sidestepped questions, the report said.

The Belgrade visit raises new questions about whether Lewandowski is indeed engaging in foreign influence peddling. Nor is this the first time that Lewandowski has been linked to efforts to drum up lobbying business in Serbia. Last year, a Serbian tabloid reported that he was poised to represent a Serbian nationalist politician, a claim Lewandowski denied.

A leading member of the Serbian opposition party, Vuk Jeremic, claimed Tuesday that during Lewandowski’s recent visit he was attempting to broker a contract for Turnberry to represent Serbian President Aleksander Vucic in Washington. “He came to Serbia to agree this [deal],” Vuk Jeremic, leader of a the Sebian People’s Party, told a local television station on Tuesday. The lawmaker, a former Serbian foreign minister, also alleged that Lewandowski offered to set up phone calls between the Vucic and President Donald Trump. Jeremic also said he was concerned that Vucic would not sign a transparent contract but instead use a third party to keep payments for lobbying secret. Jeremic did not describe the basis for his claims.

Osborne declined to comment on the trip. Lewandowski and his lawyer did not respond to inquiries Thursday.

An agenda for the roundtable event that featured Lewandowski shows that the discussion appeared to be about American politics. It cites Lewandowski’s role as an adviser to Trump and also touts an appearance by another former Trump aide, George Gigicos, who worked to set up rallies for Trump both as a candidate and as president. (Gigicos was fired from the White House in July after a Trump rally in Phoenix attracted only sparse crowds.) “The idea was for them to share their experiences working with Trump, what kind of man he is, what makes him tick, how does he make decisions, etc.,” says Jovan Kovacic, East West Bridge’s president. “In order to understand America, one must primarily understand the man who caused such an upheaval on the world stage with his unorthodox behavior, decision-making process, tweets, etc. How did such a serious establishment as DNC fail to see the signs by the road that their candidate was losing and how they failed to grasp or perhaps better said, ignored the woes of a sizeable group of disgruntled US citizens, how come DT saw this as an opportunity and grasped it successfully, and so on. As lectures, conversations go, it was very interesting and did offer a great insight. Its now easier to grasp what, how and why things are happening today the way they are.” According to Kovacic, Osborne and Rubino “did not take part in this event” but were in the country “to meet up with prominent Serbian businessmen and hear their interest in working with US companies.”

According to a local reporter who attended the forum, Lewandowski told the gathering: “You need to remind your officials of long and good relationship that our countries used to have. You need to make sure that US officials are well aware of what’s going on here.”