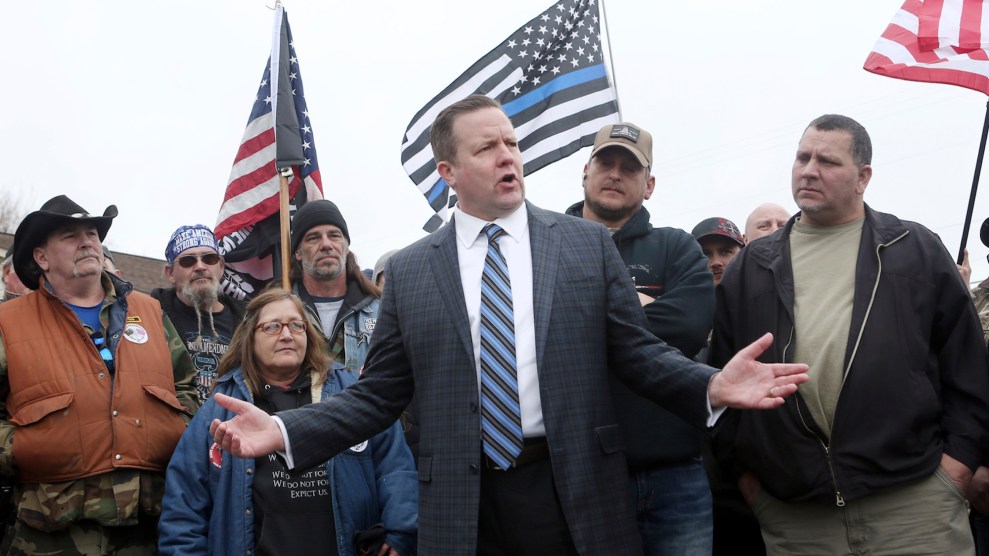 Republicans on Tuesday nominated their most controversial Senate candidate yet—a far-right Trump supporter who has built his political career around his defense of Confederate monuments. Corey Stewart, the chairman-at-large of the Prince William County board of supervisors, narrowly defeated Virginia House of Delegates member Nick Freitas in the GOP primary to take on Sen. Tim Kaine (D).

Stewart rose to national prominence last year during Virginia’s Republican primary for governor, when the Minnesota native spent the campaign defending Southern “heritage,” vowing to preserve Confederate statues. Over the course of the race, he equated politicians who had advocated for removing Confederate monuments with ISIS.

I will always fight to protect Virginia's Heritage and History! Retweet if you will too! #TakeBackVA #TeamCorey pic.twitter.com/mYqnUJ04A4

Stewart made several appearances in early 2017 with Jason Kessler. Later that year, Kessler organized of the Charlottesville, Virginia, “Unite the Right” rally, in which white supremacists joined other far-right protesters to oppose the removal of a statue of Robert E. Lee while chanting, among other things, “Jews will not replace us” and “white lives matter.” After a white supremacist killed a counter-protester, President Donald Trump blamed “both sides” for the violence. Stewart echoed that view, blaming “half the violence” on the counter-protesters.

Stewart’s run for Senate mirrored much of the rhetoric of his gubernatorial run. As Mother Jones‘ Tim Murphy reported from a Stewart campaign event last fall, Stewart gave a speech in which he said Democrats “fall into four basic categories: criminals, communists, crackheads, and weirdos.” He attempted to equate Antifa, the left-leaning anti-fascism movement whose members have sometimes engaged in street violence:

Stewart, whose own monuments cause has been embraced by white supremacists, cast Antifa as a wing of the Democratic Party. He accused Antifa of attempting to bomb a Confederate reenactment in Winchester in October—an investigation into a reported pipe bomb is ongoing but no motive or suspects have been identified—and then blasted Northam and Fairfax for failing to denounce the plot.

It was part of a general lawlessness within the Democratic Party, he said. “They absolutely love criminals,” he said, warning that Northam would turn Virginia into a sanctuary state (an idea Northam has rejected outright) and, in Trump fashion, recounting a years-old murder in Virginia Beach in which the criminal had been undocumented. “And did you know that this criminal alien scumbag has still never been brought to justice?”

At one point, someone shouted out that Democrats were “neo-fascists,” and Stewart agreed. “The neo-fascists, by the way, are the Democrats!” Stewart said. “They really are.”

At his victory party at a riverside bar in Prince William County Tuesday night, Stewart returned to these familiar themes. When he mentioned “Hillary Clinton’s running mate Tim Kaine,” the audience erupted with a “Lock her up!” chant and cries of “Antifa Kaine.”

.@CoreyStewartVA is playing the hits. When he says “Hillary,” his supporters say: pic.twitter.com/Mi7FGtUM7M

Stewart also described an America under siege from undocumented immigrants, faulting them for “suppressing wages, taking jobs, [and] committing crimes.” He offered a defense of Trump’s characterization of the international gang MS-13 from earlier this year, telling the crowd, “By the way, they are animals.” His supporters evidently agreed; they chanted, “Build the wall!”

Rhetoric along these lines sparked controversy throughout the race, leading Freitas to characterize Stewart and his supporters as “hate mongers” during the final days of the campaign. The Virginia GOP had initially sought an alternative to Stewart after last year’s sweeping losses in the governor and statehouse races. But this month, the party came to Stewart’s defense, with state chairman John Whitbeck saying, “If there were firm evidence of white nationalist sympathies, I would publicly ask any such candidate or official to resign.”

Despite the state party’s defense of Stewart, his nomination could cause headaches for Republicans facing hotly contested races in November. As of Wednesday morning, the National Republican Senatorial Committee had yet to congratulate Stewart on his primary win, even though it had done so for Sen. Dean Heller (R-Nev.) and Rep. Kevin Cramer, who will challenge North Dakota’s Democratic Sen. Heidi Heitkamp.