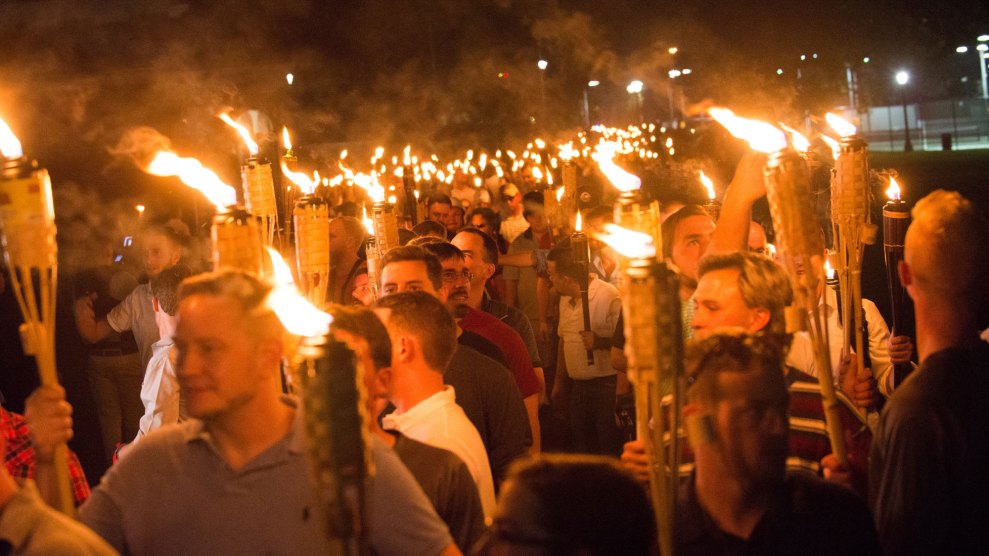 If there’s an election in 11 days, it means that someone, somewhere, is taking umbrage about something. This time it’s Ed Gillespie, the Republican nominee for governor of Virginia. Gillespie and other Republicans are upset about a mailer sent out this week by Lt. Governor Ralph Northam, the Democratic nominee, inviting voters to “stand up to hate.” The mailer features images of President Donald Trump and Gillespie, above a photo of torch-carrying white nationalists marching in Charlottesville.

This is not a piece you would send out if you were cruising to victory. pic.twitter.com/uaDmmqZFhn

Campaigns being what they are, the result is that Northam is now forced to defend the mailer as the backlash grows. But the story behind the mailer isn’t really in dispute. In May, white supremacist Richard Spencer led a rally of tiki-torch-toting demonstrators in Charlottesville to the base of a statue of Confederate General Robert E. Lee, which some local activists and city officials had called to be removed. The organizers of the rally, in a rare moment of clarity, recognized that the statue was not simply an artifact of white supremacy, but a shrine to it, and that the removal of such shrines would strike a blow to their cause. “We are white, we are a people, we will not be replaced,” Spencer proclaimed.

In August, the white supremacists returned to Charlottesville for another tiki-torch rally beneath the Lee statue. The next day, a counterprotester named Heather Heyer was killed by a white nationalist who drove his car into a crowd.

Northam, in response, pledged that he would work to remove Confederate monuments as governor. Gillespie and Trump took a different tack. The president, after first condemning violence on all sides, followed with a press conference in which he said that some of the attendees of the white nationalist rally were “very fine people” and then defended the cause for which they’d assembled.

“Many of those people were there to protest the taking down of the statue of Robert E. Lee,” he said. “So this week, it is Robert E. Lee. I noticed that Stonewall Jackson is coming down. I wonder, is it George Washington next week? And is it Thomas Jefferson the week after? You know, you really do have to ask yourself, where does it stop?” He added, “You’re changing history. You’re changing culture.” On Wednesday on Twitter, he distilled this message to something simpler: Vote for Gillespie, because “he might even save our great statues/heritage.”

So that’s how Trump ended up on a mailer about Charlottesville. Gillespie, for his part, publicly denounced the demonstrators. But he never came out against their shrine. When Spencer and his ilk first convened in Charlottesville in the spring, Gillespie was in a stunningly close primary against Trump’s onetime Virginia campaign chairman, Corey Stewart—like the Queens-born Trump and the New Jerseyite Gillespie, a northern transplant who embraced the Lost Cause later in life—who was making the defense of the Charlottesville statue a major campaign issue. Gillespie let it be known to conservatives that he, too, was opposed to the monuments’ removal.

But Gillespie didn’t abandon the issue once Stewart was out of the picture, nor did the attack in Charlottesville dissuade him from his position. A few months after Heyer’s death, Gillespie became more opportunistic about the statues Spencer and his fellow torch-carriers have fought to protect, and he has now put out two ads specifically hammering Northam for wanting to “take our statues down.” Between the release of the first ad and the release of the second ad, Spencer returned to the city where one of his followers had recently killed someone to hold a second vigil beneath the statue of Lee.

Because Trump is titanically unpopular in Virginia and because Gillespie is not an idiot, Gillespie has kept his physical distance from the president. But he has campaigned with Vice President Mike Pence, and Trump has endorsed him. And Trump and Gillespie have embraced the same language, both referring to the Confederate monuments as “our statues.”