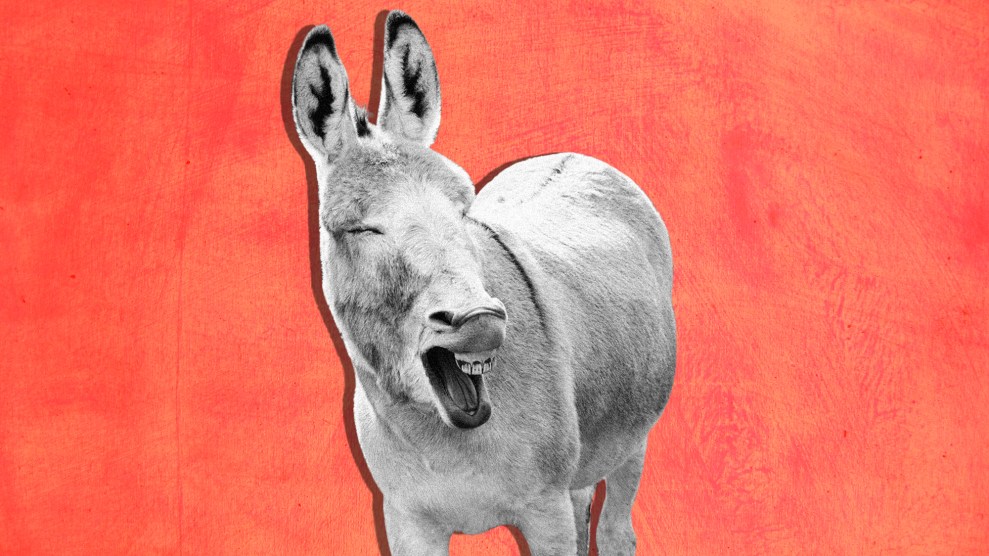 Before she could talk about her campaign for the Texas House of Representatives, Lisa Seger needed to check on her goats. Seger, who lives with her husband and 30 goats on a farm 40 minutes outside of Houston, had a doe in the maternity stall that was due any minute. “Spring is kidding season,” she explained.

If elected, the 47-year-old Seger, a sustainable agriculture proponent who got into farming after reading Michael Pollan’s The Omnivore’s Dilemma, would likely be the only member of the legislature with her own brand of yogurt. But what makes her so unusual in the state’s third district isn’t her background, it’s her party—Seger is the first Democratic candidate to run for the seat since 2010, when the Republican incumbent Cecil Bell Jr. was first elected. Seger’s state senator also ran unopposed in her last election.

“I couldn’t remember the last time I was even able to vote for a Democrat in one of our elections here,” Seger says.

“I couldn’t remember the last time I was even able to vote for a Democrat in one of our elections here.”

In West Texas, two millennial friends, Armando Gamboa, a 25-year-old from Odessa, and 24-year-old Spencer Bounds of Midland, decided to run for neighboring state house districts where Democrats have been AWOL for at least a decade. No one has run in Gamboa’s district since 2004; Bounds’ opponent is a 50-year incumbent who last faced a Democrat in 2008.

Seger, Gamboa, and Bounds are part of a trend. Call it the “Virginia Effect”: A little more than a year after the inauguration, Democrats in deep-red districts are running for office at a historic clip, determined to find and turn out progressive voters in places where no one has competed in years. It’s a sign that the enthusiasm that swept progressive activists in the first year of the Trump administration and led the party to big gains in the Old Dominion and elsewhere in 2017 is still burning heading into the midterm elections. These local races, flying mostly under the radar, could also give a party struggling for relevance in large swaths of the country a quiet boost this fall.

In Texas, Democrats are running in 131 of 150 state house districts, a nearly 50 percent increase over 2016 and the highest figure since at least the early ’90s. Democrats also have candidates in all 36 congressional districts, the first time they’ve contested a full slate since 1982, when there were only 27 districts and Rick Perry was still mulling his first run for office as a Democrat. (That number is still tentative, pending the outcome of a lawsuit in Dallas County, where Republicans are trying to get 128 Democrats thrown off the ballot because the party chair didn’t personally sign their ballot applications.)

In the handful of states where the filing deadline to run in 2018 has already passed, the story has been the same. Alabama Democrats, buoyed by Sen. Doug Jones’ stunning special election victory, have candidates in all seven congressional districts for the first time since 1996. Kentucky Democrats haven’t contested this many statehouse races—93 out of 100 districts—since 1984. Democrats in Indiana are contesting 84 of 100 state legislature races—their highest this millennium. That trend shows no sign of abating as deadlines approach in the rest of the country. To take just one measure, the party has already secured candidates in all but 11 Republican-held congressional districts; in 2016, they failed to run candidates in 27 districts.

That Donald Trump has been good for Democratic candidate recruitment is by this point canon—party organs such as the Democratic Congressional Campaign Committee, or allied groups such as EMILY’s List, the incubator for pro-choice Democratic women candidates, have recruited a top challenger in all but a handful of the 101 races the DCCC views as pickup opportunities. But another metric for Democratic enthusiasm may be how many Democrats are contesting seats at the state and local level that aren’t on the party’s target list at all.

The candidate surge was a major storyline in last year’s elections in Virginia. Democrats fielded candidates in 88 of 100 House of Delegates districts—up from 56 the previous election cycle, and the biggest slate of Democrats in 36 years. In November, they picked up 16 seats in the legislature and came within 2 seats of a majority, aided by an influx of first-time candidates. Schuyler VanValkenburg, a high school civics teacher, was only the third Democrat to contest his Henrico County district in 26 years—now he’s a delegate.

In Virginia, Democrats were quick to boast of a “reverse-coattails” effect, in which the glut of down-ballot candidates actually boosted the performance at the top of the ticket. (Historically it’s always worked the other way around, and some voters even skip over the smaller races on their ballots.) One analysis found that in deep-red Virginia precincts where a Democratic delegate candidate was on the ballot, Democratic Gov. Ralph Northam picked up 17 percent more votes than his Democratic predecessor, Gov. Terry McAuliffe. Northam saw a mere 4 percent improvement in conservative precincts where the Republican delegate was unopposed. Another independent analysis concluded that the competition for the delegate races helped drive up turnout.

Geoffrey Skelley, a political scientist at the University of Virginia, is more skeptical that down-ballot candidates boosted Northam, rather than the other way around. Nonetheless, he credited the candidate surge with making a landslide more feasible. “The lesson from Virginia is that parties should try to run candidates everywhere—ideally strong candidates—and especially if a wave favoring their party is a possibility,” Skelley says. “That way, a party can maximize the payoff of a wave. If turnout is disproportionately favorable to one side, as can certainly happen in a midterm environment, that rising tide can lift all of a party’s boats.”

Put simply: More candidates means more opportunities, especially when things go awry for the other side. No Alabama Democrat ran against Sen. Jeff Sessions in 2014; they wisely avoided that scenario against Roy Moore.

Donielle Lovell, a 38-year-old Western Kentucky University sociologist who’s the first Democrat contesting the state’s 18th house district since 2004, is instructive of the ways grassroots movements and more established institutions are each fueling the candidate boom. A progressive who had never been particularly politically active, Lovell got involved in local Democratic groups that started popping up after the election of Donald Trump. She protested outside an event held by Sen. Mitch McConnell and attended workshops on nuts-and-bolts tactics like how to organize a precinct. She was mulling a run for a local office like magistrate but decided to set her sights higher with prodding from Emerge Kentucky, the state chapter of a national organization that helps progressive women candidates run for office.

“I always saw myself as the person who does that research that allows policymakers to make evidence-based decisions,” Lovell says, explaining why she decided to mount a bid. “And I started to see less evidence in a lot of the decisions being made. So that started to concern me.”

Now she keeps in touch with other first-time candidates in Kentucky on a pair of private Facebook groups, one for educators like herself, and another for women running with the support of Emerge.

While much national attention is focused on the congressional midterms, statehouses present an increasingly enticing opportunity for Democrats, in part because after a pair of conservative waves in 2010 and 2014, the party has nowhere to go but up. Republicans may be susceptible to Virginia-like reversals in states including Pennsylvania, Florida, and North Carolina—swing states with overwhelmingly Republican legislatures, where Democrats have left a lot of seats on the table in recent years. Already, Democrats have flipped 21 formerly Republican-held seats in special elections since November 2016, some in districts that on the surface look about as competitive as Lovell’s (read: not very).

Taking back the Texas legislature, though—or for that matter, picking up another US House seat in Alabama—is still a project best measured in geologic time. No one recruited Seger to run for office, and her district isn’t on anyone’s watch list. She’s realistic about her chances but says, “If it’s ever going to happen, this is probably the year it’ll happen.”