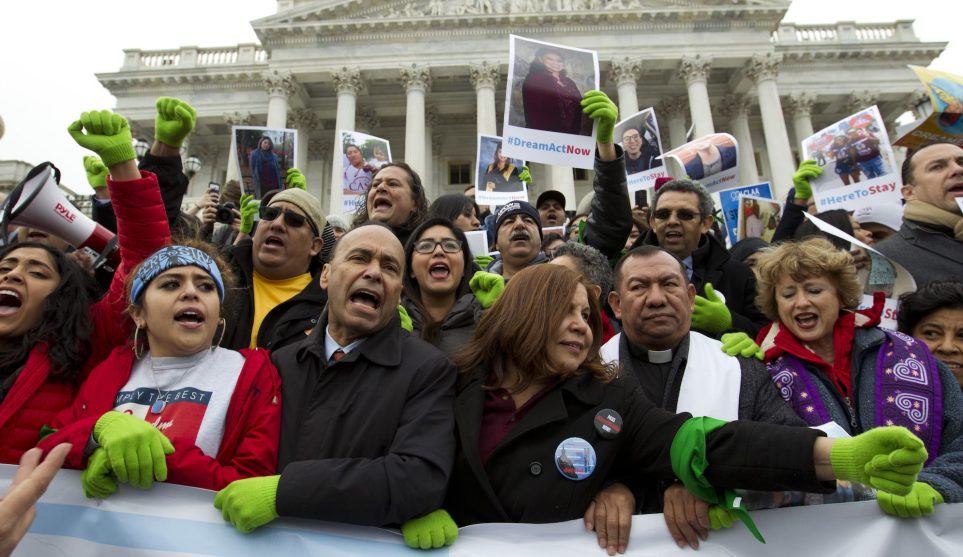 Rep. Luis Gutierrez D-Ill., third from left, along with other demonstrators, protest in support of the Deferred Action for Childhood Arrivals (DACA), and Temporary Protected Status (TPS), programs, during a Capitol Hill rally in Washington in December.Jose Luis Magana/AP

The Department of Homeland Security announced on Monday that it is ending temporary legal status for about 200,000 Salvadorans who have lived in the United States since at least 2001. Salvadoran immigrants with Temporary Protected Status (TPS) will face possible deportation if they don’t leave the country by September 2019, or find another way to obtain legal status in the United States.

El Salvador’s TPS designation has been renewed 11 times—under Republican and Democratic administrations—since then. A senior administration official said on a call with reporters that conditions related to the earthquakes “no longer exist.”

Since the earthquakes, El Salvador has become one of the most violent countries in the world. In 2017, El Salvador’s murder rate was 64 per 100,000 people. That was down from 81 in 2016, but it remains the most dangerous country in Central America. The United States’ murder rate is about 5 per 100,000.

In the United States, the Trump administration has focused on murders committed by members of MS-13, a transnational gang that has caused far more destruction in El Salvador. The senior administration official said that violence “doesn’t really apply” to whether El Salvador’s earthquake-related TPS designation is extended. In addition to environmental disasters, TPS can be granted because of “ongoing armed conflict,” as well as “other extraordinary and temporary conditions,” according to US Citizenship and Immigration Services.

Right-wing immigration groups have pushed for years to end TPS for El Salvador, arguing that the designation was never meant to be permanent. Oscar Chacón, the executive director of Alianza Americas, a network of immigrant organizations, told Mother Jones in November that it is “simply inhumane” to pretend that TPS holders “are easy to be disposed of” after two decades in the United States. The bipartisan DREAM Act would give TPS holders, as well as undocumented immigrants who came to the United States as children, a path to citizenship.

The US Chamber of Commerce has also called for extending TPS designations for El Salvador, Honduras, and Haiti. In November, the Trump administration announced that more than 50,000 Haitians will lose their TPS status in July 2019. Earlier that month, former acting DHS Secretary Elaine Duke granted 57,000 Hondurans an extension until July 2018 as the agency mulls a final decision. Monday’s El Salvador decision suggests that DHS is likely to end TPS for Hondurans as well.

“I don’t have that handy,” one replied. “No we do not,” said another. The Center for Migration Studies estimates that 192,700 children of Salvadoran TPS holders are US citizens.