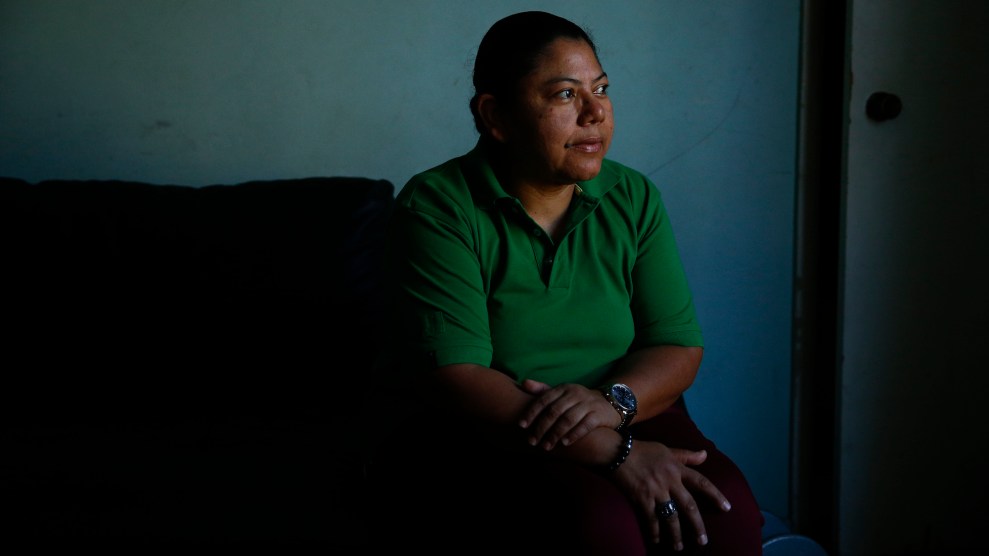 Iris Acosta, a 51-year-old hotel housekeeper from Honduras with Temporary Protected Status, sits in her sister's Los Angeles apartment in October. The Trump administration will soon decide whether Acosta can stay in the country.Jae C. Hong/AP

On Monday, the Department of Homeland Security announced that 2,500 Nicaraguans who have lived in the United States with temporary legal status for nearly two decades have 14 months to leave the country. The 57,000 Hondurans with the same status received more ambiguous news: DHS is granting them an extension until July 2018 as it mulls a final decision.

And in the coming months, DHS will decide whether nearly 250,000 Haitians and Salvadorans will be able to stay in the United States. All signs from the administration suggest that protections for people from these countries will soon come to an end—forcing them to choose between returning to their dangerous homelands and remaining in the United States without legal status.

Temporary Protected Status allows people from 10 countries to live and work in the United States. Congress created the program in 1990 to prevent foreigners—primarily undocumented immigrants—who were already in the United States from being returned to countries suffering from natural disasters or ongoing armed conflict. Over the years, many countries’ TPS designations have been regularly renewed, while others have lost them under Democratic and Republican presidents. There are now about 273,000 US-born citizens whose parents have TPS.

Immigrants’ rights group quickly denounced DHS’s announcement on Monday and called on Congress to provide long-term TPS holders with permanent status. Alianza Americas, a network of immigrant organizations, said ending TPS for Nicaraguans was a “shameful” decision that ignores their contributions to the United States. Adrian Reyna of the youth-led immigration group United We Dream called the decision “part of Trump’s racist drive to force millions of people of color underground, into jails and out of the country.”

Hondurans, Nicaraguans, and Salvadorans received TPS nearly 20 years ago, following natural disasters. Haiti was granted a TPS designation in 2010 after an earthquake killed about 300,000 people.

The roughly 300,000 immigrants now awaiting a decision from DHS have reason to be pessimistic. In May, DHS granted Haitians the same six-month extension it gave Nicaraguans on Monday, instead of the 18-month extensions that countries have typically received. DHS also stated that Haitian “beneficiaries should plan accordingly that this status may finally end.” In September, the Trump administration announced the end of protections for Dreamers—young undocumented immigrants who came to the country as children, and who are more politically organized than TPS holders.

Last week, the Washington Post reported that the State Department has told DHS it believes that Haitians and Central Americans no longer need TPS. Oscar Chacón, Alianza Americas’ executive director, says the State Department’s position is “appalling” in light of “what we know they know.”

If DHS ends their protected status, Chacón says Hondurans and Salvadorans will be returning to countries much different from the ones they left. Both countries have become more violent since the early 2000s and are now among the most dangerous in the world. In recent years, about 175,000 Central American children have arrived at the US border on their own to escape gang violence and poverty.

For the US-citizen children of TPS holders, Chacón says the “least harmful” option would be staying in the United States if their parents return home or get deported. Following their parents back to Central America would put them at risk of being attacked by gangs that have been known to target young people.

If DHS does end TPS for Central Americans and Haitians, Congress could still act to block them from being deported. One option would be to pass the DREAM Act, a bipartisan bill that would give Dreamers and TPS holders a path to citizenship. But so far the measure has gone nowhere, and alternatives proposed by Republicans do not cover TPS beneficiaries. In October, the Trump administration demanded that Congress enact a sweeping list of hardline immigration policies as part of any deal to protect Dreamers, but made no mention of TPS.

On Monday, Acting DHS Secretary Elaine Duke called on Congress to a “enact a permanent solution for this inherently temporary program” in light of the challenges facing Nicaraguans who have had TPS for nearly two decades. But Duke was vague about what that permanent solution would be, and she is on her way out. The real question for TPS holders is whether Kirstjen Nielsen, Trump’s pick for permanent DHS secretary, will side with the anti-immigration advisers like Stephen Miller who have dictated Trump’s policy so far.

DHS has until Thanksgiving to decide whether to send 50,000 Haitians back to a country where basic necessities remain in shortly supply. The decision for nearly 200,000 Salvadorans will come in January.