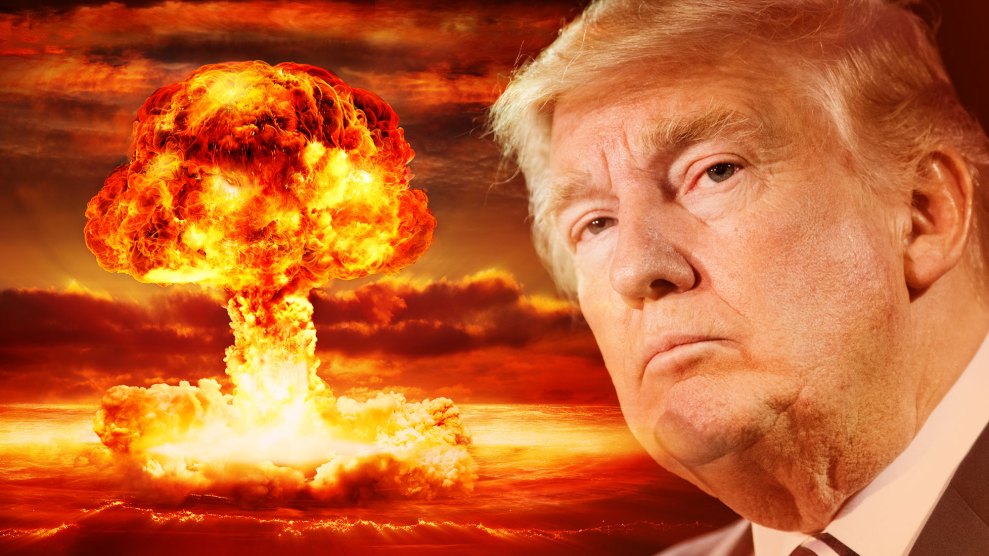 This past summer, I explored probably one of the most important questions facing the nation and the world: could President Donald Trump be stopped from recklessly using nuclear weapons? Interviews with several experts in nuclear command and control yielded an answer that was not encouraging: probably not, unless his order to launch was met with a full-scale mutiny from the military. On Tuesday, the Senate foreign relations committee examined this topic, and it hardly presented a clearer or more reassuring picture.

As senators questioned three experts—retired Gen. C. Robert Kehler, a former commander of the US Strategic Command, Peter Feaver, a professor at Duke University, and Brian McKeon, a former acting undersecretary of policy at the Pentagon—the point was repeatedly made that Trump has the ultimate and sole authority to send nuclear weapons flying. This is especially true in the case of the United States facing an imminent threat, such as a foreign adversary launching (or preparing to launch) a nuclear strike against the United States. In these circumstances, the president would have minutes to decide whether to order a nuclear assault. There would be little time for the president to consult with anyone but a few advisers before reaching a decision. The nation and the rest of the world would be at his mercy.

The other scenario considered by the committee and its witnesses was less cut and dry: what could happen if the president ordered a nuclear attack when there was no imminent threat? Say, Trump wanted to strike at Rocket Man in North Korea because he would not give up his nuclear weapons program. Was there any ability to counter a presidential decision to use nuclear weapons in such an instance?

Kehler contended that a rational process was in place and that a presidential order to launch nuclear weapons would be subject to the fundamental constraints applicable to all military orders. “The military does not blindly follow orders,” Kehler said, explaining that such orders “must be legal” in terms of military necessity and proportionality. He seemed to be suggesting that the US Strategic Command, which is in charge of the US nuclear arsenal, could reject an order it deemed illegal. “There are always legal constraints” on all military operations, he insisted, and he pointed out that the military “is not obligated to follow illegal orders.” He added, “If you believe [a military order] did not meet the legal test of proportionality…you retain the decision to disobey the commander in chief.”

That seemed heartening. But there was one one huge wrinkle. Asked what would happen if a military commander concluded a presidential order to use nuclear weapons was not legal, Kehler said that “would be a very difficult process and would be a very difficult conversation.” He did envision the possibility of a commander saying, “I have a question. I am not willing to proceed.” What would happen next? “I don’t know,” Kehler replied.

At one point, McKeon tried to present a calming sentiment: “It’s hard to imagine—and would be very unusual—for the president to make the decision to use nuclear weapons without consultations.” He insisted that if the president’s military and national security advisers had concerns about an order to use nuclear weapons, “we would be able to resolve those issues.” Feaver noted there would be a “large group” of military and legal advisers weighing in.

But Sen. Chris Murphy (D-Conn.) offered a sharp retort: “We are concerned that the president of the United States is so unstable and is so volatile…that he might order a nuclear weapon strike that is so wildly out of step with US national security interests.” Could calmer heads prevail? Not necessarily.

Watching the hearing, Joe Cirincione, a nuclear weapons expert and president of the Ploughshares Fund, tweeted, “Those defending the status quo, like Kehler, pretend that a ‘conference’ or ‘consultation’ must take place. This is not true. POTUS can make decision all by himself.” He added, “Kehler is trying desperately to avoid the obvious: If a crazy President orders a legal nuclear strike from one of the already vetted war plans, there is no one that can stop him.” (Cirincione also criticized the selection of the panel: “If you’re having a hearing on changing the president’s ability to launch nuclear war, you might want to have at least one witness who thinks we need to change. Just saying.”)

At the hearing, Sen. Edward Markey (D-Mass.) promoted legislation he has introduced that would prohibit a president from launching a nuclear first strike—that means an attack that is not in response to an imminent threat—without a declaration of war by Congress.  Markey has argued that no president should be allowed to use nuclear weapons except in response to a nuclear attack. (Former Defense Secretary William Perry has endorsed Markey’s bill.) “I don’t think we should be trusting the generals to be a check on the president,” Markey said.

At the start of the hearing, Sen. Ben Cardin (D-Md.) noted that he usually doesn’t get questions about foreign policy when he holds town hall meetings with constituents, but lately he has repeatedly been asked if the president can “really order a nuclear attack without any controls.” And Sen. Bob Corker (R-Tenn.), the committee chairman, said that this hearing was the first time in 41 years that any foreign affairs committee of Congress has met to discuss this topic.

That’s what Trump has done: he has made nuclear fears quite real again. The witnesses tried to depict the current policy as generally safe and reasonable. But they could not avoid a basic fact: the system ultimately depends on the judgement of one person. Trump is an erratic and impulsive man who has repeatedly demonstrated minimal devotion to facts. He also has expressed troubling views about nuclear weapons, sometimes adopting a fatalistic stance toward nuclear war. This hearing did little to allay reasonable worries about Trump and nukes. The only consolation prize is that it demonstrated that if you’re losing sleep about Trump possessing the power to destroy the civilized world, you are not alone.