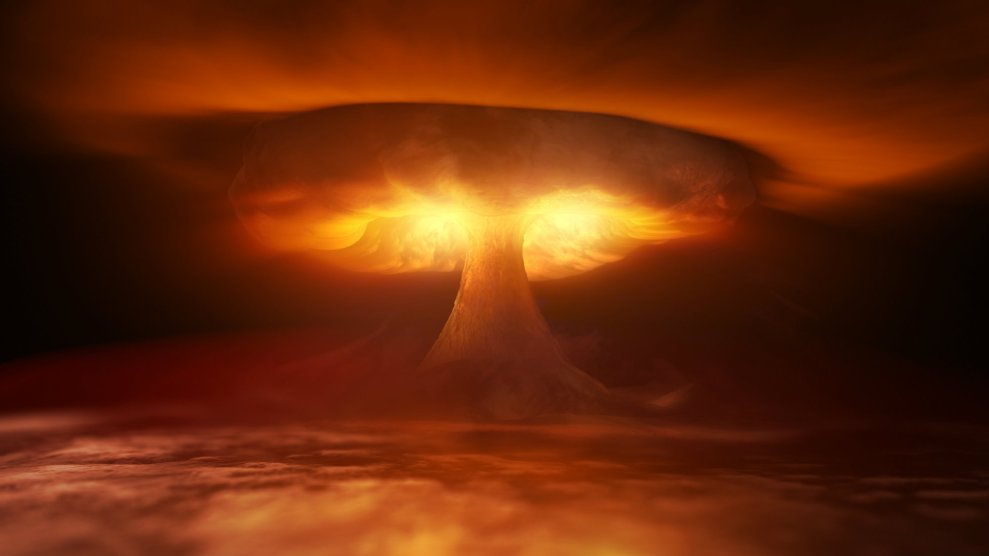 On Wednesday morning, NBC News provided sane people with more reason to be scared: at a private July 20 meeting with his top national security officials, President Donald Trump said he wanted a nearly tenfold increase in the US nuclear arsenal. He made this remark after being shown a chart that illustrated a steady decrease in the number of US nuclear weapons over the past 50 years. Trump responded by telling his most senior advisers, which included Secretary of State Rex Tillerson and the Joint Chiefs of Staff, that he wanted the bigger number shown at the start of the downward slope, not the smaller amount at the end. Officials had to explain to Trump that the current level was lower due to years of successful arms treaties and that the nation’s overall military posture was now much stronger than in the days of a larger and bloated nuclear arsenal. It was at the end of this meeting—where other national security matters were discussed—that Tillerson apparently was overheard referring to Trump as a “moron.”

It is indeed worrisome that Trump seemed to adopt a simplistic and dangerous more-is-better approach to nuclear weapons. But what’s even more unsettling, as I have previously written, is that Trump has a history of making comments about nuclear weapons that both display his profound ignorance about this all-important subject and suggest he believes a nuclear conflict is inevitable and perhaps destined for the near future.

Trump first demonstrated he knew little about nuclear weapons in the 1980s, when he repeatedly boasted to reporters that he would make a good nuclear arms negotiator and that the job would be easy. In a 1984 interview with the Washington Post, Trump, then a 38-year-old celebrity developer, said he hoped one day to become the United States’ chief negotiator with the Soviet Union for nuclear weapons. Trump declared he could negotiate a great nuclear arms deal with Moscow. Comparing crafting an arms accord with cooking up a real estate deal, Trump insisted he had innate talent for this mission. He claimed he would know exactly what to demand of the Russians—though he conceded his lack of experience in the technical field of nuclear weaponry. “It would take an hour-and-a-half to learn everything there is to learn about missiles…I think I know most of it anyway,” he said. “You’re talking about just getting updated on a situation.”

A few months earlier,  Trump had expressed the same sentiment to a New York Times reporter. The writer noted, “Trump thinks he has an answer to nuclear armament: Let him negotiate arms agreements—he who can talk people into selling $100 million properties to him for $13 million. Negotiations is an art, he says and I have a gift for it.” In 1986, Trump told Bernard Lown, a cardiologist who invented the defibrillator and who received the 1985 Nobel Peace Prize for joining with a prominent Soviet physician to promote nuclear arms reduction, that he could concoct a nuclear disarmament deal with the Soviet Union and end the Cold War in an hour.

Trump’s assertions that a nuclear deal could be quickly forged indicated he knew little of the subject. And during the 2016 presidential campaign, he uttered several troubling statements about nuclear arms that revealed he hadn’t learned much in the intervening decades At a Republican debate, he botched a question about the nuclear triad—America’s system of sea-, air-, and land-based nuclear weapons—a clear sign he did not understand the fundamentals of the structure of the US nuclear command. He babbled, “For me, nuclear is just the power, the devastation is very important to me.” (At other times during the campaign, Trump said he would support allowing Japan, South Korea, and Saudi Arabia to obtain nuclear weapons and signalled he would be open to using such weapons against ISIS and in other conflicts.)

Over the years, Trump’s reckless and fact-free talk about nuclear weapons has been coupled with remarks showing he has a fatalistic approach and possibly believes a nuclear conflagration is unavoidable. In a 1990 interview with Playboy, Trump said, “I think of the future, but I refuse to paint it. Anything can happen. But I often think of nuclear war.” He explained:

I’ve always thought about the issue of nuclear war; it’s a very important element in my thought process. It’s the ultimate, the ultimate catastrophe, the biggest problem this world has, and nobody’s focusing on the nuts and bolts of it. It’s a little like sickness. People don’t believe they’re going to get sick until they do. Nobody wants to talk about it. I believe the greatest of all stupidities is people’s believing it will never happen, because everybody knows how destructive it will be, so nobody uses weapons. What bullshit…It’s like thinking the Titanic can’t sink. Too many countries have nuclear weapons; nobody knows where they’re all pointed, what button it takes to launch them.

Five years later, Trump was asked where he would be in five years. “Who knows?” he replied. “Maybe the bombs drop from heaven, who knows? This is a sick world, we’re dealing here with lots of sickos. And you have the nuclear and you have the this and you have the that.” Trump continued expressing the notion that nuclear annihilation could be on the horizon: “Oh absolutely. I mean, I think it’s sick human nature. If Hitler had the bomb, you don’t think he would have used it? He would have put it in the middle of Fifth Avenue. He would have used Trump Tower, 57th and Fifth. Boom. I mean, you have people that are sick and they are now having nuclear arsenals…I like to project for the future but really live very much for the present. And I like to learn from the past, but it’s very very fragile, life is so fragile.

In another Playboy interview—this one in 2004—Trump once more conveyed his nuclear despondency. He was asked, “Do you think Trump Tower and your other buildings will bear your name a hundred years from now?” Trump responded, “I don’t think any building will be here—and unless we have some very smart people ruling it, the world will not be the same place in a hundred years. The weapons are too powerful, too strong.”

So for decades, it seems, Trump has been haunted by the feeling that nuclear war may be inescapable. Now he is in a position to do something about the matter. But instead of taking steps to reduce the number of nuclear weapons, he has repeatedly discussed increasing the number of nukes within the US arsenal and abroad. (At the July 20 meeting, Trump essentially said he wanted the US nuclear stockpile to expand from about 4,000 to about 32,000 weapons.) And the threats Trump has hurled at North Korea— it will face “fire, fury and frankly power, the likes of which this world has never seen before”—imply that he has considered the use of nuclear weapons against Kim Jong Un. (By the way, should Trump order a nuclear strike, it would be damn hard for anyone around him to stop it.)

There is much that is alarming about Trump’s nuclear posture. His attitude toward nuclear policy is cavalier. (Hey, this stuff is easy!) He lacks basic knowledge of nuclear matters. And he is reckless in issuing nuclear-ish threats. (During the 2016 campaign, MSNBC’s Joe Scarborough reported that Trump had thrice asked a national security adviser why a president couldn’t use nuclear weapons.) But what renders this terrifying trifecta even more frightening is the nuclear fatalism Trump has voiced throughout the years.  If he thinks nuclear war is inevitable, might he feel less restrained when it comes to unleashing weaponry that can destroy human civilization? Tillerson’s use of the m-word has received much media attention, justifiably. But the bigger story by far is that Tillerson’s “moron” is in command of the nuclear arsenal and years’ worth of evidence indicates that Trump wants it to grow, that he’s interested in putting it to use, and that he believes a nuclear catastrophe is bound to happen. That’s a prophecy his own actions and ignorance could well end up bringing about.