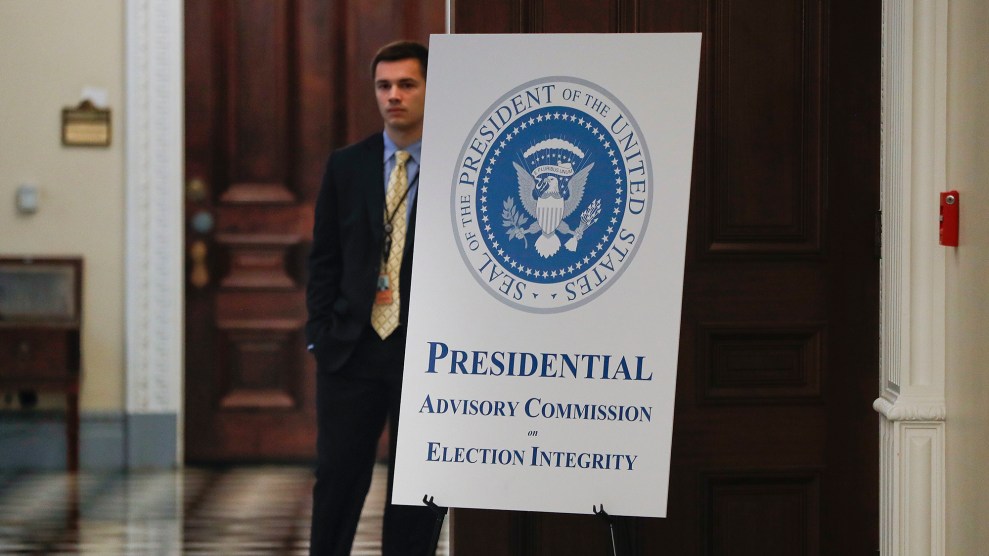 Sign outside the room for the first meeting of the Presidential Advisory Commission on Election Integrity in Washington, DC, July 2017.Pablo Martinez Monsivais/AP

The work of President Donald Trump’s controversial election integrity commission has ground to a halt in recent weeks as the commission faces a barrage of lawsuits, according to one of its Republican members.

“It’s my understanding that there were just so many lawsuits against the commission that it’s really, right now, there’s nothing going on,” Indiana Secretary of State Connie Lawson told reporters on Wednesday. No fewer than 13 lawsuits have been filed over the commission’s work by civil rights groups, privacy watchdogs, and good government groups. The lawsuits allege that the commission has violated a number of federal transparency and privacy laws, as well as state laws governing how sensitive voter information must be handled.

Meanwhile, two Democrats on the commission—Maine Secretary of State Matthew Dunlap and Alabama probate judge Alan King—have said they have no idea if the body has any upcoming meetings or agenda items, since they’ve been kept in the dark about its activities. The commission was expected to hold its third public meeting sometime in November, but no meeting has been announced.

Dunlap says the only information he’s received about another meeting came from a conservative group called the Minnesota Voters Alliance, which announced in a fundraising email that it had been invited to the commission’s December meeting. That email, which Dunlap’s office forwarded to Mother Jones, states, “We are pleased to let you know that the Minnesota Voters Alliance (MVA) was invited to speak at the December 2017 meeting of the ‘Presidential Advisory Commission on Election Integrity’, also known as the ‘Trump Voter Fraud Commission’.  The meeting information has not been released yet, but we’ll let you know as we learn more.” Dunlap says he plans to ask the commission whether a December meeting has indeed been planned.

On Wednesday, Lawson said she also hadn’t known about Williams’ work for the committee. Nor does she know when the next public meeting will be held. “The information I received was, look, we just want to get some of these [lawsuits] behind us so that we can get to work,” she said, following her testimony at a congressional hearing on states’ upkeep of their voter rolls. She added, “It’s very chilling to know that, you know, you can’t really work without somebody suing over something that you’ve done. So it’s very chilling. We’re not really emailing each other. We’re not conversing with each other. It’s just not going on.”

She continued, “So it’s not the fact that anybody’s being shut out. It’s just that they wanted to get some of these lawsuits settled and then move forward.”

Told of Lawson’s comments, Dunlap says, “It’s more information than I’ve had, quite frankly.” No one has told him anything about the commission’s activities, he says, or mentioned that the lawsuits have caused it to suspend its agenda.

It’s possible that Lawson’s understanding that the commission’s work has ground to a halt isn’t entirely correct, and that she too has been left out of the loop. Neither Kossack nor commission vice chair Kris Kobach responded immediately to requests for comment. Asked if Lawson might also be lacking information about the commission’s plans, Dunlap responded, “Not knowing nothing, all I can say is I know nothing.”