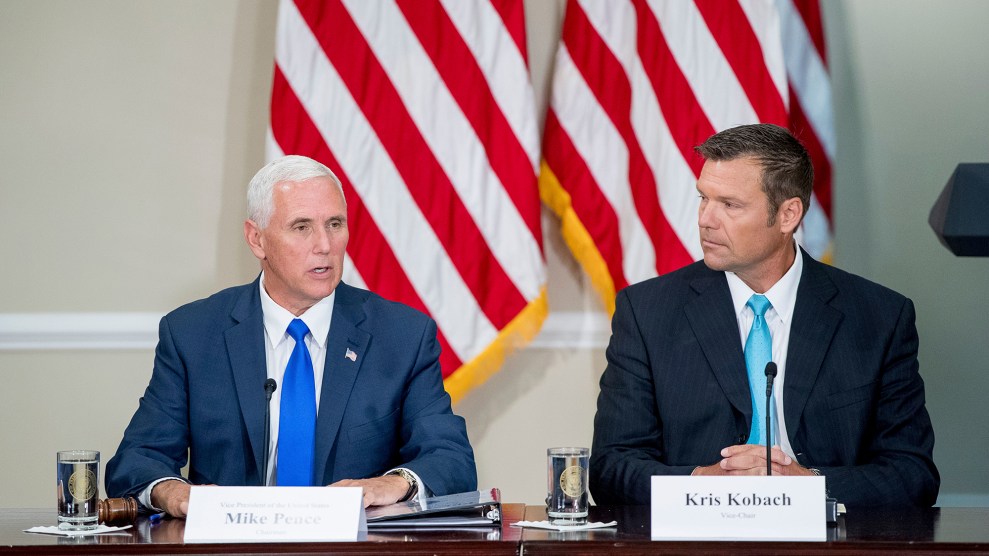 A new court document has provided a rare view into the workings of Donald Trump’s controversial election integrity commission, which has operated in almost complete secrecy. The document, an index of communications to and from commission members and staff, casts further doubt on the legality of the commission’s work and its requests for voter data.

The commission has also been in contact with what the index described as “third-party data analysis entities,” indicating that the commission may seek to outsource its analysis of voter data to a private company.

“The information released by the so-called Commission on Election Integrity as a result of our lawsuit paints an incomplete but alarming record about the Commission’s work and intentions,” said Kristen Clarke, the president of the Lawyers Committee for Civil Rights Under Law, whose lawsuit against the commission resulted in the document’s release.

The commission is chaired by Vice President Mike Pence, but it’s clear from the communications records that it is being run by its vice chairman, Kansas Secretary of State Kris Kobach, and staff from Pence’s office. While some commission members have reported not knowing exactly what the commission is working on, Kobach has been communicating for months with two of his staunchest ideological allies on the commission: Hans von Spakovsky of the Heritage Foundation, who was previously the most prominent advocate for tighter voting restrictions in the Justice Department under George W. Bush, and J. Christian Adams, another former Bush Justice Department official who has spent the last several years to attempting to purge voter rolls around the country. Before von Spakovsky and Adams joined the commission in July, the three corresponded about who should be on the commission, and von Spakovsky wrote a letter requesting that no Democrats be included. (Several Democratic members were ultimately appointed.) In the week leading up to the June 28 letter requesting detailed personal information on every registered voter, the three corresponded about the request.

The communications with the Department of Homeland Security suggest that the commission may be seeking data that the department is not legally authorized to share.

The Federal Advisory Committee Act requires the membership of an executive advisory commission be “fairly balanced in terms of the points of view represented and the functions to be performed.” Multiple lawsuits already filed against the commission raise this issue; a suit filed by the NAACP says the group is “fully skewed by the appointment of unsubstantiated views about voter fraud.” If the commission’s Democrats are kept in the dark and not part of the substantive deliberations and decision-making—as the index of communications suggests—that raises the question of whether the law is being violated.

The communications with the Department of Homeland Security (DHS) also suggest that the commission may be seeking data that the department is not legally authorized to share. The index doesn’t say what was discussed, but at the commission’s first public meeting, in July, both von Spakovsky and Kobach suggested that the commission could acquire naturalization records and other data from DHS. Federal privacy and immigration laws restrict DHS’s ability to share personal data. When it collected people’s information, DHS may also have outlined how the information would be used. One person who could help make DHS’s decisions on whether to share this information is Cameron Quinn, a close associate of von Spakovsky who last month became the civil rights and civil liberties officer at DHS.

The index also shows commission staff reaching out to the Social Security Administration (SSA) on the subject of “SSA data.” According to the Huffington Post, Kobach has previously suggested using SSA data to find dead people still on voter rolls.

Though the commission has released this index as ordered by the court, it has not provided a list of every communication, and it is claiming that it is not required to release the content of the communications—although it’s likely that the courts will ultimately make that call.

The communications log shows that the committee is in talks with third-party data analysis vendors about “potential collaboration,” suggesting that it may be seeking to outsource its analyses of the voter data it has collected to a private company. Depending on the details of the arrangement, there may be concerns about how the data will be sent and stored, whether it will meet federal requirements, and how the commission will fund the analyses.

The index could provide more fodder for groups suing the commission. If their cases move forward, the question of whether the commission’s activities have crossed any legal lines could be decided by the courts.

You can read the index here.