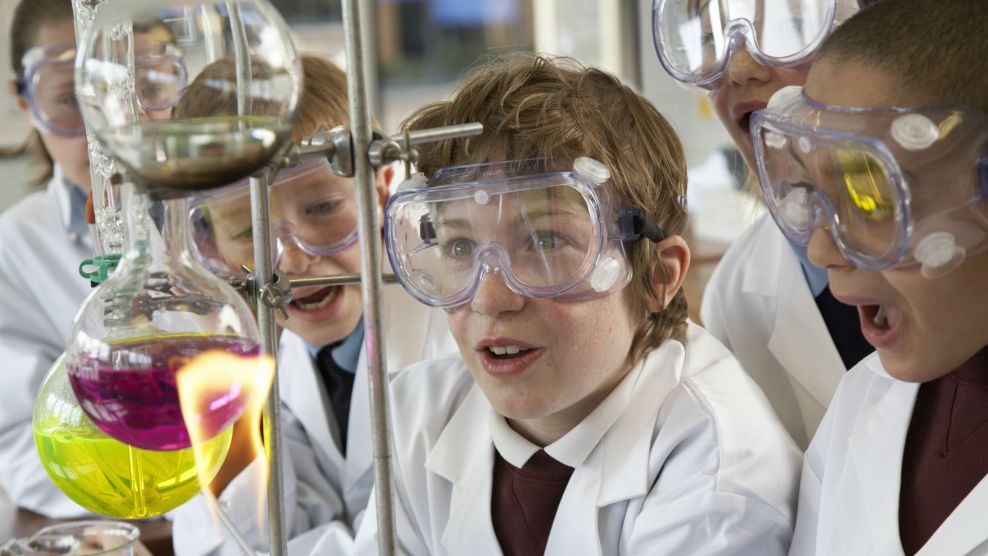 New Mexico’s public education agency announced late Tuesday that it would restore references to evolution, global warming, and the age of the Earth that had been stripped out of the state’s proposed science education standards. The reversal comes after an outcry by teachers, scientists, students, and others—the culmination of which was a day-long public hearing on Monday in which scores of people spoke out against the draft standards.

“Similar to the process in other states, our goal in holding a public hearing is to ensure all those who wanted to discuss these proposed standards would be heard,” Christopher Ruszkowski, New Mexico’s secretary of education, said in a Tuesday statement. “We have listened to the thoughtful input received and will incorporate many of the suggestions into the New Mexico Standards.”

The whole saga began last month when, as Mother Jones first reported, the state’s Public Education Department unveiled a set of draft standards for science, technology, engineering, and math (STEM) education spanning grades K-12. New Mexico’s proposal largely followed the Next Generation Science Standards, a highly regarded model for teaching STEM that has been adopted by 18 states and the District of Columbia. But the state also made several baffling changes of its own, as we explained:

[T]he draft released by New Mexico’s education officials changes the language of a number of NGSS guidelines, downplaying the rise in global temperatures, striking references to human activity as the primary cause of climate change, and cutting one mention of evolution while weakening others. The standards would even remove a reference to the scientifically agreed-upon age of the Earth—nearly 4.6 billion years. (Young Earth creationists use various passages in the Bible to argue that the planet is only a few thousand years old.)

“These changes are evidently intended to placate creationists and climate change deniers,” says Glenn Branch, the deputy director of the National Center for Science Education, a nonprofit group that defends the teaching of climate change, evolution, and other scientific-backed subjects in the classroom. The proposed changes, Branch added, “would dumb down New Mexico’s science education.”

A backlash ensued, with science experts, teachers, and others who were stunned by the state’s anti-science proposals voicing their displeasure with state education officials. New Mexico’s two US senators, both Democrats, wrote that they were “disturbed” by the proposed changes.

Ruszkowski, the education secretary, initially responded to critics by saying that his agency had crafted the proposed science standards—including the ones omitting evolution, human-caused global warming, and the age of the Earth—after hearing from “business groups, civic groups, teacher groups, superintendents.” (He declined to name those who helped shape the standards.) The process that went into developing the controversial standards, he added, was “how PED does business.”

However, in an interview with Mother Jones, a former PED official who helped develop the science standards contradicted Ruszkowski’s account. Lesley Galyas, who worked for four years as PED’s math and science bureau chief, said “one or two people” working “behind closed doors” had politicized New Mexico’s science standards. “They were really worried about creationists and the oil companies,” she said. In the end, she quit her job at the agency in protest of the changes sought by her bosses.

The pressure on the Public Education Department seems to have had an effect. In a Tuesday statement to the media, a department spokeswoman outlined several changes PED would make to New Mexico’s proposed standards that would bring them back into alignment with the NGSS. Those include restoring references to the 4.6-billion-year age of the Earth and to evolution; replacing a reference to the supposed “fluctuation in global temperatures over the past century” with a more accurate reference to the “rise in global temperatures over the past century”; and making a fourth change that more accurately reflects the facts of rising global temperatures and climate change.

Science education experts praised the education department’s rollback of its earlier anti-science proposals. But they cautioned that the department had not yet agreed to adopt the NGSS in full and that New Mexico students would be at a disadvantage if the state didn’t embrace the national standards.

“I’m encouraged that they issued a change so quickly, which indicates that they heard the 200 people” who attended Monday’s public hearing, says Ellen Loehman, a spokeswoman for the New Mexico Science Teachers’ Association. She says that PED has so far addressed the most immediate and significant concerns of New Mexicans but that the department can and should go further. “Our position is we want the Next Generation Science Standards as written. Period.”