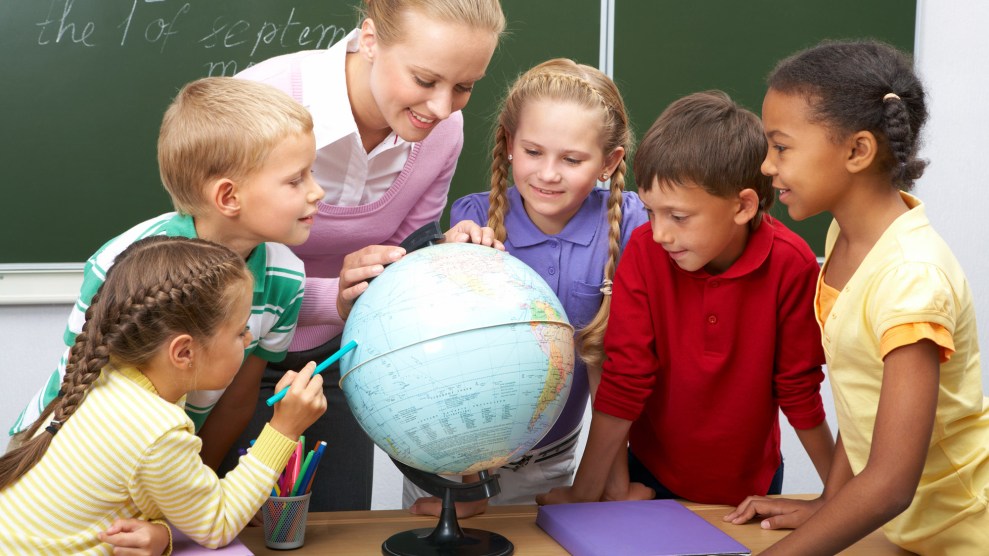 New Mexico’s public education agency wants to scrub discussions of climate change, rising global temperatures, evolution, and even the age of planet Earth from the standards that shape its schools’ curriculum.

The state’s Public Education Department this week released a new proposed replacement to its statewide science standards. The draft is based on the Next Generation Science Standards, a set of ideas and guidelines released in 2013 that cover kindergarten through 12th grade. The NGSS, which have been adopted by at least 18 states and the District of Columbia, include ample discussion of human-caused climate change and evolution.

“These changes are evidently intended to placate creationists and climate change deniers.”

But the draft released by New Mexico’s education officials changes the language of a number of NGSS guidelines, downplaying the rise in global temperatures, striking references to human activity as the primary cause of climate change, and cutting one mention of evolution while weakening others. The standards would even remove a reference to the scientifically agreed-upon age of the Earth—nearly 4.6 billion years. (Young Earth creationists use various passages in the Bible to argue that the planet is only a few thousand years old.)

“These changes are evidently intended to placate creationists and climate change deniers,” says Glenn Branch, the deputy director of the National Center for Science Education, a nonprofit group that defends the teaching of climate change, evolution, and other scientific-backed subjects in the classroom. The proposed changes, Branch added, “would dumb down New Mexico’s science education.”

Standards such as New Mexico’s act as a guide for educators in determining the knowledge and abilities their students are supposed to acquire. School districts craft their curricula based on statewide standards; textbook publishers write their books to fit the standards; and state bureaucrats design their tests around what’s contained in the standards.

The public has just over 30 days to weigh in on the proposal, and the department will hold a hearing on the changes on October 16 in Santa Fe, the state capital.

Construct a scientific explanation based on evidence from rock strata for how the geologic time scale is used to organize Earth’s
geologic history.

In another instance, laying out standards for middle schoolers, the new text misrepresents the reality of rising global temperatures:

Ask questions to clarify evidence of the factors that have caused the fluctuation in global temperatures over the past century.

A third example would make a similar change to a discussion of climate change for high schoolers:

Analyze data and the results from global climate models to make an evidence-based forecast of the current rate of global or climate fluctuation and associated future impacts to Earth systems.

A fourth change would cut a mention of evolution in standards intended for high schoolers:

Construct an explanation based on evidence that biological diversity is influenced by: (1) the potential for a species to increase in number, (2) the heritable genetic variation of individuals in a species due to mutation and sexual reproduction, (3) competition for limited resources, and (4) the proliferation of those organisms that are better able to survive and reproduce in the environment.

And a fifth change is a newly written standard for New Mexico middle schoolers that appears to be little more than state-sponsored boosterism for the state’s powerful oil and gas industry:

Describe the benefits associated with technologies related to the local industries and energy production.

There are more climate-related changes in the proposed standards, though it’s worth noting that a few references to evolution appear to have survived. You can read them all in the document below:

There is no serious debate among scientists that the Earth is nearly 4.6 billion years old. NASA, on its website under the heading “Facts,” states unequivocally that the planet’s average temperature is not “fluctuating“—it is steadily increasing and shows no sign of slowing down. And it is the scientific community’s overwhelming consensus that evolution is real and that it underpins our understanding of human biology.

In April, New Mexico Gov. Susana Martinez, a Republican, vetoed legislation that would have forced the state to adopt the Next Generation Science Standards. Martinez said the law was too strict and that the state’s education department was already in the process of crafting its own science standards—the standards the department released earlier this week.

Update, September 15: After this story was published, a spokeswoman for New Mexico’s Public Education Department emailed the following response:

“The PED has and will continue to listen and respond to input from all of New Mexico’s stakeholders across the state when putting together new content standards, from the fine arts to the STEM fields, that haven’t been updated in the last decade. It is time for New Mexico to again raise the bar. We must come together and push forward so that our kids can prepare to advance in their career prospects in the 21st century,” said Deputy Secretary of School Transformation Debbie Montoya. “As science, technology, and engineering advance in concert with our business and industry partners, New Mexico is working hard to ensure that children have access to the most rigorous standards and assessments while also expanding science resources and opportunity for schools and educators.”