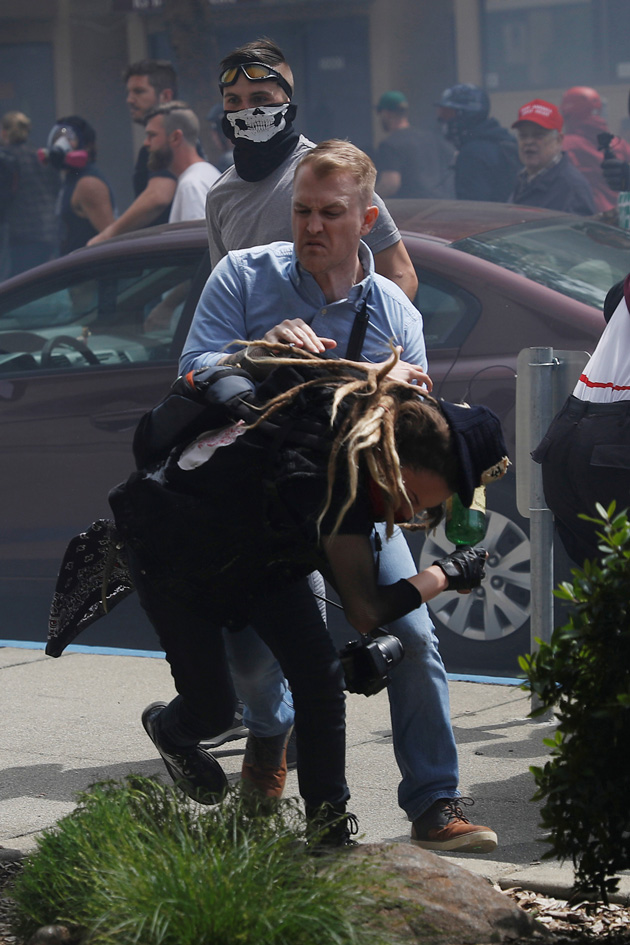 A video of Nathan Damigo (top) and Emily Rose Marshall (below) during the street fighting in Berkeley on April 15 went viral. Stephen Lam/Reuters via ZUMA Press)

On Saturday, April 15, Emily Rose Marshall drove up to Berkeley, California, from Los Angeles with a group of friends who were part of the anarchist Oak Roots Collective. They had heard about the “free speech” rally being held in Berkeley by an array of Donald Trump supporters, militiamen, and white supremacists. “We saw this was a rally meant to uplift neo-Nazis and the alt-right,” Marshall says. “We wanted to be bodies yelling and screaming in the street, adding to the number of people letting neo-Nazis know they couldn’t just show up for racism.”

By the time Marshall and her friends arrived in downtown Berkeley, the scene had devolved into street skirmishes between the right-wing side and “antifascist” counterprotesters. She and her friends were dressed in black like their “antifa” comrades, masking their faces to protect their identities. They went near the front line where people were facing off. An antifa activist lobbed a tear gas canister, but the wind blew the cloud back and right wingers rushed the antifa side, swinging.

When the short melee was over, Marshall wasn’t entirely sure what had just happened. Marshall, a 95-pound, 20-year-old white woman with dreadlocks who also goes by the alias Louise Rosealma, had been punched at least twice. The crew of right wingers who Marshall, her boyfriend, and others had tussled with for a minute ran up the street in pursuit of other antifa. She didn’t know it yet, but the man who had hit her was Nathan Damigo, a 30-year-old ex-Marine and head of the white nationalist group Identity Evropa. Within minutes, a video of her getting punched was on its way to going viral.

Blood was streaming from Marshall’s boyfriend’s nose, which looked like it might be broken. They left the rally and went to a hospital. After she got in the car, she checked her phone. Hate emails started streaming in. “Would you be interested in doing a role play photoshoot,” read one she later forwarded to me, “where you are being beaten and raped (simulated), by a group of white nationalists?” “I absolutely love watching you get punched in your ugly ass face on YouTube. I can watch it over and over,” another read. “Might I suggest leaping your ugly, hairy ass from a tall building? Or, perhaps, swallow a bottle of sleeping pills? How’s it feel to finally be treated like a man? Haha.” Since then, she says she’s received more than 1,500 harassing or threatening messages via email, Facebook, and Instagram.

How did they know who Marshall was, and so quickly? One emailer signed off, “Praise Kek and Hail Victory,” hinting at the source of the storm. “Kek” is the god of a satirical religion that originated in the meme-driven world of 4chan, the online message board popular among the so-called alt-right.

Archived 4chan threads provide a glimpse into workings of the alt-right hive mind on the day of the Berkeley showdown. “Looks like a rat faced kike,” one commenter wrote shortly after the punching video was posted. Threads discussing the video became interspersed with memes of cartoon Jews with oversized noses. “That Jew whore thought she was the Jew bear,” one poster wrote. (Marshall is not Jewish.) Within hours of her getting punched, people on 4chan and other message boards publicized Marshall’s home address and contact information for her parents, grandmother, and 15-year-old brother. They discovered that she’d appeared in pornography. They turned explicit images of her into memes and posted links to her sex videos on her grandmother’s Facebook page. Before Marshall got back to Los Angeles that Saturday night, her mom had received so many calls that she’d unplugged the phone. 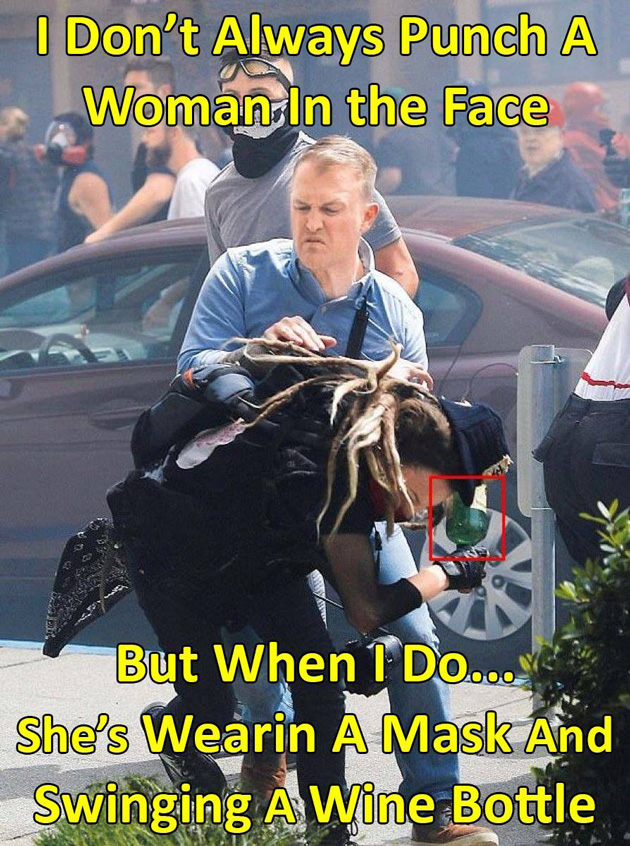 Some on 4chan went to work building a case justifying Damigo’s decision to punch Marshall. Before arriving at the rally, she’d posted on Facebook that she was “determined to bring back 100 nazi [sic] scalps,” a reference to the Quentin Tarantino movie Inglourious Basterds. This was presented as evidence that she’d come to fight and was therefore a fair target. Posters also found a Reuters photo and a video showing Marshall holding a glass bottle as Damigo rushed toward her. Some online posters claimed she had been throwing bottles at them. A military gear site called Tactical Shit claimed Marshall was putting powerful M80 firecrackers inside bottles and throwing them at rally attendees: “She was literally making IEDs. This makes her no better than the Boston Marathon bomber.” Damigo, the site claimed, was eliminating a bomb threat.

Marshall insists none of this is true. She says she picked the bottle off the ground to stave off attackers when the fight began. There is no evidence to corroborate her account or the alt-right’s. All that is clear based on video of the incident is that Marshall was holding a bottle as Damigo rushed in and hit her. She fell to the ground, dropped the bottle, got up, and stumbled away. A moment later, Damigo found her again and punched her in the face. (Asked for a comment from Damigo, Identity Evropa responded, “The video footage and photographs of the event as well as Miss Rosealma’s social media speak for themselves. Other than that we have no further comment.”)

The alt-right is aware that the new fight with its anti-fascist opponents is as much a clash of brawn on the streets as a culture war online. During the lead up to the April 15 rally, one 4chan commenter described it as “a battle on the front lines and the lefties help us make fun memes for the ages.” At the rally, some right-wing attendees carried signs referencing obscure 4chan memes. Even as people were fighting in the streets, the 4chan meme factory was already churning out content. 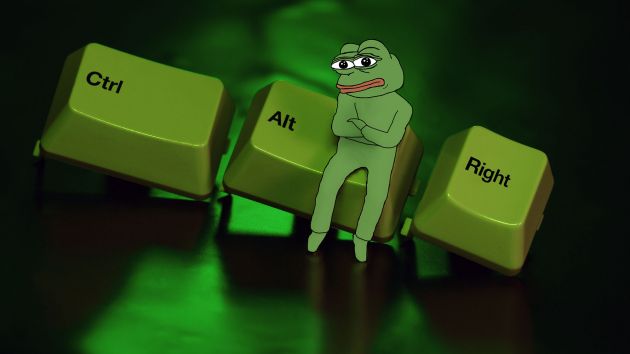 Meme warfare is uniquely suited to the far right. Unlike the antifa’s culture of anonymity, the far-right rallies around visible strongmen. Outlandish costumes like Spartan helmets and outrageous acts like Damigo’s “Falcon Punch” create excellent hero memes, which galvanize supporters and refute critics. Where a man punching a woman in the face would have previously been seen as an act of cowardice, it is now quickly recast as an act of heroism against terrorism, of moralism over hedonism, or of the master race against Jewish globalists.

The alt-right tried to identify others at the Berkeley rally as well. Message boards posted pictures and purported names of various antifa activists who’d shown up in Berkeley. One antifa man who hit someone in the head with a bike lock was allegedly identified through a meticulous effort of combing through images of the rally and matching the sunglasses and facial hair of an unmasked man with the masked bike lock wielder’s.

Berkeley Police Department spokesperson Sergeant Andrew Frankel says the BPD is aware of the video, but he declined to state whether it is pursuing charges against Damigo. Marshall says she has avoided pressing assault charges against Damigo because she is afraid that if “they take action against him, I’ll have actual Nazis at my door instead of the trolls.”