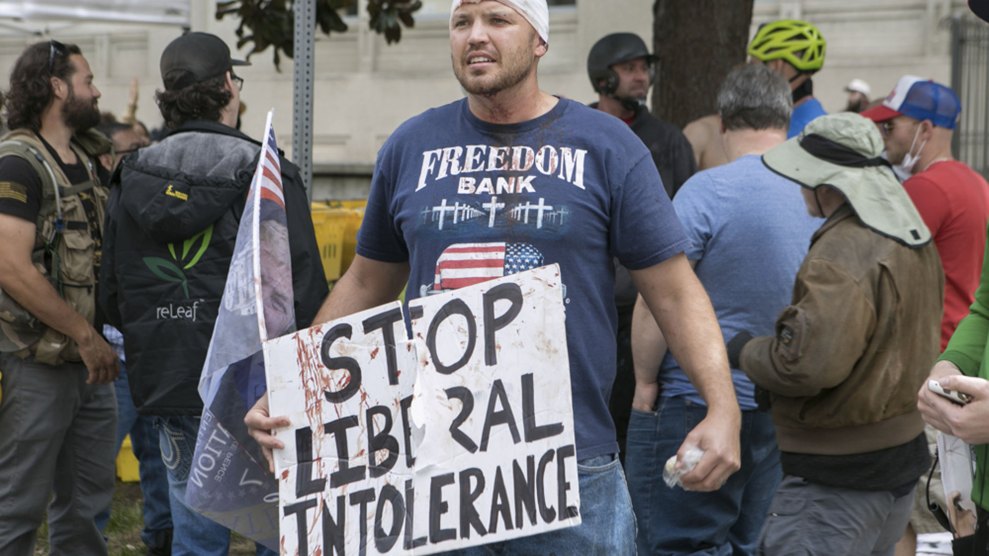 A "free speech" rally in Berkeley on April 15Emily Molli/AP

Saul Alinksy’s Rules for Radicals, published in 1971 at the height of the counterculture movement, has long been required reading for community organizers on the left. It inspired activists with the labor movement, Occupy Wall Street, and Black Lives Matter. A young Hillary Clinton wrote her senior thesis on Alinsky and fawningly corresponded with him. But recently Alinsky has drawn a less likely group of devotees: the white nationalists and other bigots who make up the so-called alt-right.

After the white nationalist figure Nathan Damigo was filmed punching a female counterprotester at a provocative “free speech” rally this month in Berkeley, California, fueling a backlash online, his fans on the fringe message board 4chan/pol/ turned to Alinsky’s playbook. “Alinsky’s Rules for Radicals is like Antifa’s Quran,” one 4channer wrote. “They follow his rules explicitly and inflexibly. Why not turn them back against them?” Everyone agreed that at the next scuffle they should spray female counterprotesters with silly string—an idea inspired by Alinsky’s Rule 5: “Ridicule is man’s most potent weapon.”

“The Left is getting massively out-Alinskyed, and the hilarious thing is that this band of withered hippies, unemployable millennial safe-space cases, and unlovable + unshaven libfeminists don’t even know it,” wrote right-wing columnist Kurt Schlichter recently in TownHall. “Thank you, Andrew Breitbart. You yelled ‘Follow me!’ and led a movement that had previously been dominated by doofy wonks and bow-tied geeks over the top in a glorious bayonet charge against the paper tiger liberal elite.”

Begrudging respect for Alinsky and the leftist protest tactics he inspired is nothing new on the right; FreedomWorks, the Koch-funded political organization, reportedly handed out Rules for Radicals to tea party activists. But the alt-right appears to have really taken Alinsky’s strategic thinking to heart—or at least when they are not just straight-up hyping their next opportunity to beat the hell out of some antifa.

“This isn’t us taking on a brilliant book because we admire the guy,” says Proud Boys founder Gavin McInnes. “It’s us seeing what your tactics are and using them against you.”

“A lot of the strategy of this site is based on it,” Andrew Anglin, the publisher of the neo-Nazi Daily Stormer, wrote in September, urging his followers to read the book. In November, another neo-Nazi site, The Right Stuff, published a detailed analysis of Alinsky’s rules, concluding that “the Alt-Right is already in something of an unholy alliance with (((Alinsky))).” (The “echo” parenthesis are used by white supremacists to single out Jews.)

Far-right provocateur Gavin McInnes, whose “Western chauvinist” Proud Boys were among those who waged bloody fights with antifa in Berkeley, described Alinsky to me as “an immoral human being”—but nevertheless professed to be a student of his writings. “This isn’t us taking on a brilliant book because we admire the guy,” he told me. “It’s us seeing what your tactics are and using them against you.”

Nowhere has that strategy more clearly been on display than in Berkeley, where supporters of Trump-boosting media provocateurs Milo Yiannopoulos and Ann Coulter have gleefully taken their cue from the Free Speech Movement of the 1960s. Although the University of California-Berkeley canceled each of their planned speeches over mounting security concerns—exacerbated by the mayhem around Yiannopoulos’ scheduled appearance in March—officials worked to reschedule Coulter’s speech. She declined. On Monday, conservative student groups filed suit against the university, arguing that canceling Coulter’s talk violated their free-speech rights. Then Coulter vowed to show up anyway. Then she vowed not to come—on Wednesday the New York Times reported she was out. “Everyone who should believe in free speech fought against it or ran away,” Coulter declared. (Alinsky’s Rule 4: “Make the enemy live up to their own book of rules.”) Then she told Fox News that she might still come: “I think I am still going to Berkeley, but there will be no speech.”

Though most of Alinsky’s devotees on the left eschew violence and laud, as he did, the passive resistance techniques of Mahatma Gandhi and the civil rights movement, his writings are not necessarily inconsistent with the alt-right’s and antifa’s embrace of street battles. “[T]he future does not argue for making a special religion of nonviolence,” he wrote. “It will be remembered for what it was, the best tactic for its time and place.”

On Wednesday 4channers remained convinced Coulter was still headed to Berkeley—”so we’re still on to bash some Antifa,” one said.

The alt-right’s repeated physical clashes with counterprotesters in Berkeley and elsewhere represent an evolution in tactics for what had been mostly an online movement. They also dovetail with the alt-right’s penchant for generating viral memes: An image of Kyle Chapman (a.k.a. Based Stick Man) pummeling an antifa counterprotester in Berkeley made him an alt-right celebrity and led to the birth of his own anti-antifa Proud Boys militia group, the Fraternal Order of Alt-Knights. (Chapman was arrested in Berkeley in mid April on an outstanding warrant for battery.) Thanks to additional publicity whipped up by Coulter, discussion and planning for the next Berkeley showdown has consumed 4chan since last week, with more than 100 recent posts dedicated to the subject, including talk of busing people in from around the country. No one seems deterred by Coulter’s waffling. “Folks are still going to Berkeley as a protest against the Domestic Terrorist Organization known as BAMN,” began one 4chan thread on Wednesday. “Spread the word. This changes nothing.”

“She’s apparently still going,” said another 4channer, “so we’re still on to bash some Antifa.”

“Regardless of Ann Couture’s (sic) decision,” Chapman wrote on Facebook, “we will have our rally. We will go back to MLK Civic Center Park and stand against these demons.”

“The whole idea of having Trump/free speech rallies in Berkeley is the historic nature of it,” a 4channer wrote earlier this month. “In 1968 the free speech movement happened in Berkeley to support communism. Now it is happening again in 2017 to support anti-communism, in hostile territory. It’s a battle on the front lines and the lefties help us make fun memes for the ages.” (Alinsky’s Rule 6: “A good tactic is one your people enjoy.”)

Activists on the right have much less experience than leftists with turning street protests into media tools. The civil rights, anti-war, and Occupy movements rose to prominence with the spread of photographs and videos documenting police brutality against protesters, from the use of fire hoses in Birmingham, Alabama, to pepper spray by a police officer at the University of California-Davis. The viral video of white nationalist leader Richard Spencer getting punched is a relatively rare example of the radical left celebrating violence. Yet for the meme-makers of the far right, humiliating their rivals by presenting their street brawlers as physically dominant is the preferred theme: “We’re just braver, and that makes for better jokes,” says McInnes. “The left are the new Church ladies. They’ve been sheltered in their own bubble for so long, they don’t know fun.”

An alt-right meme based on the Damigo punching video

Few people on the far-right have done more to turn the ideas of the left against it than Yiannopoulos, who enjoyed a rising career of co-opting “identity politics” in the interest of white males, before a pedophilia scandal knocked him from his perch. On Friday, he doubled down on the strategy of appropriating leftist concepts, announcing that he will host a “free speech week” this year that may include “a tent city on [UC-Berkeley’s] Sproul Plaza.” The idea repurposes an approach last seen on a large scale in 2011 at UC Berkeley and other university campuses in solidarity with Occupy Wall Street—but this time, in service of the right to say nasty things about women, people of color, and Muslims.

Which points directly to another Alinskyism that the alt-right is now testing: “If you push a negative hard enough, it will push through and become a positive.” As one proponent of the idea explained on the neo-Nazi site The Right Stuff: “We want to get to the point where being labeled by the establishment as a racist, sexist, or antisemite (sic) is a sign of having done something correct.”